Earlier in the week, I sang the praises of Kaze Hikaru, my all-time favorite shojo manga (and one of my all-time favorite manga, period). Today I shine the spotlight on five great titles that haven’t garnered as much favorable notice as they deserve. Sadly, all but one are officially out of print or will be soon, owing to publisher closings, lapsed licenses, and so-so sales. If you can’t find them through retailers such as Amazon, Buy.com, or Right Stuf!, you might wish to cast your net wider to include sites like Robert’s Anime Corner Store (a good source for older titles) and eBay, or try your local library for copies. 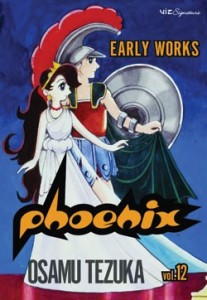 A better subtitle for volume twelve of Phoenix would be I Lost It At the Movies, as these four stories reveal just how passionately Osamu Tezuka loved American cinema. In a 1980 essay, Tezuka explained that “watching American big-screen spectacle movies such as Helen of Troy and Land of the Pharaohs made me want to create a similar sort of romantic epic for young girls’ comics.” Looking at this collection, the sword-and-sandal influence manifests itself in almost every aspect of Tezuka’s storytelling, from the costumes and settings to the dialogue, which the characters declaim as if it were of Biblical consequence. (Paging Charlton Heston!) What makes this Hollywood pomposity bearable — even charming — is the tempering influence of Walt Disney. The character designs owe an obvious debt to Snow White, while the supporting cast could easily belong to Cinderella or Sleeping Beauty’s entourage of chatty animal friends.

Anyone looking for the moral complexity of later Phoenix stories will be disappointed in volume twelve, as Tezuka’s villains are cartoonishly evil and his heroes (and heroine) chastely noble. If one approaches this collection in the spirit of, say, a musicologist flipping through Beethoven’s pre-Eroica manuscripts, however, the rewards are more palpable. In these early stories we see Tezuka developing his comedic chops with pop culture references and physical slapstick; we see him experimenting with layout, as he renders the battlefields of Troy and Rome in sweeping, full-page panels; and we see him creating his first cycle of interconnected stories, introducing some of the themes that would unify the entire Phoenix saga. In short, we see Tezuka’s first attempts to find his own voice as he pays tribute to the artists who influenced him, learning more about his exuberant, unique artistry in the process. (Originally reviewed at PopCultureShock on 3/19/08.) 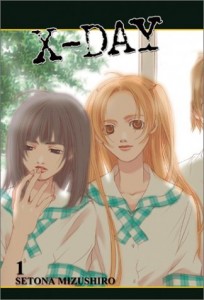 When star high jumper Rika injures her leg and loses her boyfriend to a teammate, she becomes profoundly depressed. She soon discovers an online community of similarly disaffected students, however, all of whom share her desire to “make the school disappear.” Their internet chats soon give way to in-person meetings, where Rika comes face-to-face with three very different people: “Polaris,” a shy teen who dresses like a Goth off campus, “Mr. Money,” a friendly underclassman, and “Janglarian,” a young biology teacher who wants to dynamite the school. Setona Mizushiro’s dark story could easily spiral into melodrama, but she does a fine job of showing us how the normal tribulations of being a teenager — fighting with parents, enduring harassment from peers, feeling overwhelmed by anxiety — have led these four fragile people to hatch such a radical plan for coping with their pain. The second volume lacks the dramatic urgency of the first, as the students’ plot begins to come unraveled, but X-Day remains persuasive until its final pages, thanks to Mizushiro’s vivid characterizations and nuanced artwork. 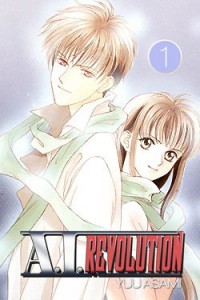 A.I. Revolution starts from a premise familiar to legions of Isaac Asimov fans: a human builds a robot, only to discover his creation has a mind and feelings of its own. Sui, the story’s human protagonist, initially views robots as household appliances, not unlike toasters or vaccuum cleaners. When her father presents her with an android companion, however, Sui develops a strong bond with it, discovering that Vermillion has a capacity for emotion that far outstrips her expectations.

A.I. Revolution may sound like I, Robot Hottie, but Yuu Asami puts a thoughtful spin on the material, filtering familiar sci-fi themes through a shojo lens. Though she weaves evil scientists and corporate espionage into the narrative, the story is at its best when focusing on Vermillion’s interactions with his human family; Sui’s father, for example, has modeled Vermillion in the image of a colleague that he admired, leading to a few funny, awkward moments of human-robot flirtation, while Sui seesaws between sisterly protectiveness and romantic attachment to her handsome companion. (Really, is there any other kind of robot in shojo manga?) Asami’s art reminds me of Akimi Yoshida’s with its elongated character designs, delicate linework, and sparing use of screentone. It’s a little dated perhaps, but a welcome change of pace from the slicker, busier layouts characteristic of the titles licensed by Tokyopop and VIZ. Highly recommended for fans of old-school shojo. (Originally reviewed at PopCultureShock on 3/4/08.) 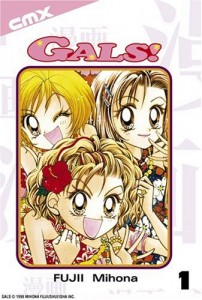 This wacky comedy is one of the better shojo licenses in the CMX catalog, a rude, raunchy, and oddly moral tale about a feisty kogal named Ran Kotobuki. Though Ran and her pals are primarily interested in shopping for outrageous outfits, visiting the tanning salon, and stealing book bags from students at rival schools, Ran’s upbringing in a household full of police officers (dad, mom, and big brother are all cops) has taught her to adhere to a strict code of conduct: no sex for favors, and no tolerance for anyone who disrespects her friends.

Ran is a terrific, memorable character — impetuous, loud, funny, and tough, the kind of person who would literally smack sense into another girl if she thought it would work. Better still, she’s not easily swayed by boys; her relationship with the sweet but dim Tatsuki is surprisingly chaste, limited primarily to hand-holding and awkward discussions about feelings. (Ran won’t deign to say, “I love you,” as it compromises her tough-girl image.) As befits a manga that was serialized in Ribon, all of the characters have enormous, doll-like eyes in the Arina Tanemura style, and fabulous outfits that shame the Gossip Girls. The backgrounds are surprisingly detailed, conveying the look and feel of the Shibuya district with a specificity that’s all too rare in shojo manga. In sum, Gals! is the kind of good-natured gang comedy that I hoped My Darling! Miss Bancho would be: full of humor and heart, but with fewer capitulations to shojo convention. 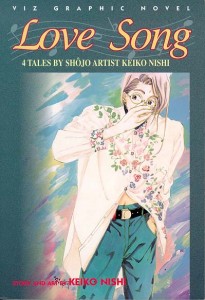 Back in the 1990s, Matt Thorn labored hard to make Keiko Nishi a household name among American manga readers, translating six of her stories for VIZ; two appeared in Four Shojo Stories alongside work by Moto Hagio and Shio Sato, and four appeared in a stand-alone volume called Love Song. Though Nishi didn’t catch on with Western shojo fans, it’s easy to see why Thorn championed her work: she’s a terrific, versatile storyteller, equally capable of writing light-hearted fantasies and character studies of deeply damaged people.

Of the four stories that appear in Love Song, two are standouts: “Jewels of the Seaside,” a black comedy about three sisters who compete for the same man’s affection, with disastrous results, and “The Skin of Her Heart,” a quiet sci-fi tale about a young woman torn between what she wants and what her mother wants for her. (Readers who enjoyed A, A’ or Twin Spica are a natural audience for “Skin of Her Heart,” though it works equally well for folks who aren’t big sci-fi buffs.) Nishi’s artwork is an acquired taste, at times precise, elegant, and naturalistic, and at times loose and sketchy, with the white of the page playing an important role in underscoring the emotional distance between her characters. Her minimalist approach won’t be to every shojo fan’s liking, but she demonstrates that it’s perfectly possible to convey the interior lives of her characters without resorting to the kind of visual shorthands — flowers, sweatdrops, nosebleeds — that have been overused in contemporary shojo manga. Love Song is out of print, but unlike Four Shojo Stories and A, A’, is still relatively easy to obtain through online retailers like Amazon. Highly recommended.

DUCK PRINCE (Ai Morinaga • CMP • 3 volumes, suspended)
Morinaga’s battle-of-the-sexes comedy takes a standard shojo plot — homely gal gets makeover to win the guy of her dream — and turns it on its head, substituting a sweet, helmet-haired nerd for the customary plain Jane, and adding a novel twist: Reiichi appears to most girls as a smokin’ hottie, but in the presence of his beloved Yumiko, he reverts to his original form. As in all her work, Morinaga uses humor to make deeper points about gender roles and physical beauty, though Duck Prince is too rude and risque to be mistaken for an Afterschool Special. Central Park Media released three of the five volumes before suspending Duck Prince; of all the titles left homeless by CPM’s demise, it seems like one of the strongest candidates for a license rescue, though middling sales of Your & My Secret and My Heavenly Hockey Club may have scared American publishers away from Morinaga’s distinctive comedies. 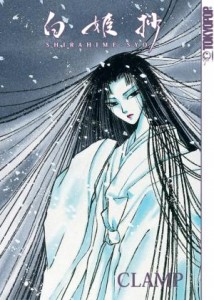 SHIRAHIME-SYO: SNOW GODDESS TALES (CLAMP • Tokyopop • 1 volume)
This lovely anthology is a radical departure for CLAMP. Gone are the super-detailed costumes and fussy character designs of their early, post-doujinshi work; in their place are spare, simply-drawn figures that seem consciously modeled on examples from eighteenth- and nineteenth-century scroll paintings. The stories themselves are told directly without embellishment, though CLAMP infuses each tale with genuine pathos, showing us how the characters’ anger and doubt lead to profound despair. As a result, the prevailing tone and spirit are reminiscent of Masaki Kobayashi’s 1964 film Kwaidan, both in the stories’ fidelity to the conventions of Japanese folklore and in their lyrical restraint. And if my description didn’t sell you on Shirahime-Syo, let this beautiful image, taken from the final story of the collection, persuade you to give this out-of-print gem a try: 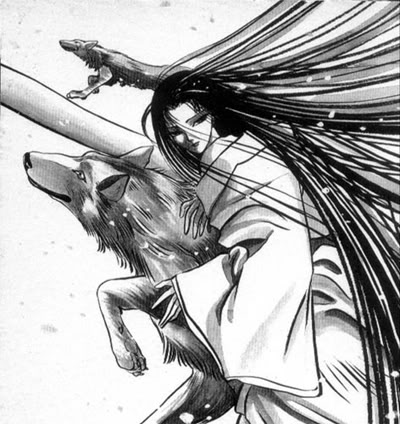 So what titles top your list of underrated shojo manga? Inquiring minds want to know!