Boo! This week, I’m taking the highly imaginative step of writing about spooky manga. The twist? All three titles are penned by trailblazing female artists. First up is Mitsukazu Mihara’s Haunted House (Tokyopop), a comedy about a normal teen whose parents have clearly embraced Addams Family Values. Next on the agenda is Rumiko Takahashi’s Mermaid Saga (VIZ), an older series that mixes horror and folklore to good effect. (You can read the first chapter for free at the Shonen Sunday website.) And last but not least is Kanako Inuki’s School Zone (Dark Horse), a three-volume series about a school built atop a cemetery — always a bad idea, kids, even when the land is being offered at bargain-basement prices. 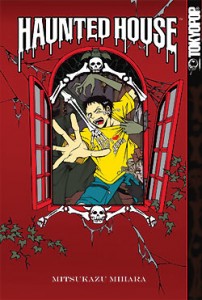 Remember that brief but excruciating period in your adolescence in which everything your parents said, did, or wore proved horribly embarrassing? Sabato Obiga, the hero of Haunted House, is living through that very stage. The crucial difference between his experience and yours, however, is that his family is genuinely odd: they look and act like something out of a Charles Addams cartoon, from their dramatic attire — Mom dresses like Morticia Addams, Dad like an undertaker — to their penchant for ghoulish pranks. Though Sabato desperately wants to date, his family members do their best to sabotage each new relationship by staging ridiculous scenes in front of his girlfriend du jour. In the first chapter, for example, Mom blithely picks up the family cat and announces that she’ll be “cooking something special on account of our guest,” while in a later chapter, his parents don hockey masks for a visit to the video store where he works. (Note to fellow animal saps: no cats were harmed in the making of this comic.)

I’d be the first to admit that Haunted House is a one-joke manga: Sabato likes ferns, but his family prefers Venus fly traps! Sabato likes Titanic, but his family prefers Jaws and Dolls of Meat! Before that joke is beaten into the ground, however, Mitsukazu Mihara reveals that Sabato’s family may, in fact, be doing him a favor with their elaborate hazing rituals. Her moral is delivered a little too neatly, but it prevents the story from devolving into sadistic, repetitive exercise in humiliating Sabato. Fans of Mihara’s elegant, stylized character designs won’t be disappointed, as the Addams Family schtick provides her a perfect excuse to draw the kind of detailed costumes and languid figures that are her forte.

The bottom line: Mitsukazu Mihara doesn’t have great comedic chops, but this stylish, droll story proves more interesting and clever than one might guess from the initial set-up. 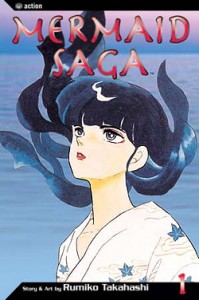 Immortality isn’t all it’s cracked up to be, or so a young fisherman named Yuta discovers after he consumes a mermaid’s flesh. Yuta remains youthful and indestructible, while the people around him — his wife, his friends, his subsequent lovers — grow old and die. Desperate to live an ordinary existence, Yuta spends the next five hundred years wandering Japan in search of a mermaid who can restore his mortality. Joining him is Mana, a rude, foul-tempered girl whom Yuta rescues from a blood-thirsty pod of mermaids. Their travels bring them into contact with dozens of other immortal beings, from “lost souls” (people who were grotesquely deformed by the poison in mermaid flesh) to reanimated corpses.

Mermaid Saga features nine self-contained stories, some depicting events from Yuta’s distant past and others documenting his present-day adventures with Mana. Though all end on a similar note — characters learn that eternal life comes at a terrible price — several are surprisingly poignant. In “The Ash Princess,” for example, Yuta meets a girl whose grieving father used mermaid flesh to resurrect her lifeless body, only to exploit his daughter as a sideshow freak, while in “Mermaid’s Scar,” Yuta and Mana match wits with a boy who has been trying to recreate the mother he lost centuries earlier. Takahashi’s art is crisp and effective, evoking a variety of time periods and locales while creating a suitable atmosphere of dread. As in InuYasha, she doesn’t shy away from the occasional grotesque or gory image, but uses them to underscore the ugly consequences of greed, jealousy, and lust. (Well, and elicit an appreciative eeeeeeewwww as well.) Readers who prefer Takahashi in slapstick comedy mode won’t find much to like here, but if you’ve enjoyed the horror element in “The Laughing Target” or InuYasha, Mermaid Saga might be your cup of tea. 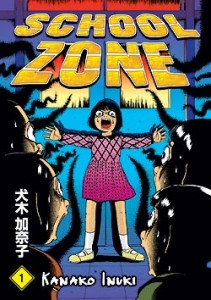 At an elementary school in an unnamed city, students cheerfully swap ghost stories: some say the school was built on an old cemetery, while others say that a group of students was struck and killed just outside school grounds. The students soon learn that their willingness to believe these stories has made them come true, unleashing a horde of angry spirits onto school grounds. Only one thing can stop the demonic onslaught: restoring the thirteen mirrors that grace the landings of every stairwell in the building.

Straightforward as the plot may sound, Kanako Inuki’s story unfolds more like a nightmare than a narrative, filled with non-sequitors, symbolically rich imagery, and events that would be impossible to explain using any conventional form of logic. Like Kazuo Umezu’s best work, School Zone is more profitably understood as a meditation on childhood fears of being ostracized, ridiculed, or abandoned, as the students’ own response to the ghosts is often more horrific than the ghosts’ behavior. Inuki’s artwork isn’t as imaginative as Umezu’s, though she demonstrates a similar flair for comically gruesome thrills: one girl is dragged into a toilet, for example, while another is attacked by a scaly, long-armed creature that lives in the infirmary. Where Inuki really shines, however, is in her ability to capture the primal terror that a dark, empty building can inspire in even the most rational person; even when the story takes one its many silly detours (and yes, there are many WTF?! moments in School Zone), Inuki makes us feel her characters’ vulnerability as they explore the school grounds after hours.

The bottom line: Fans of Kazuo Umezu’s The Drifting Classroom will find a lot to like about Inuki’s  School Zone, from its gross-out humor and ALL CAPS DIALOGUE to its unsentimental depiction of children in all their emotional complexity.