This week’s edition of The Manga Review focuses primarily on San Diego Comic-Con. Before I get to the SDCC links, though, I wanted to talk about a New York Times article that appeared on July 23rd: “Comics That Read Top to Bottom Are Bringing in New Readers.” As you might guess from the headline, the article explores the growing popularity of Tapas and Webtoon, both of which are attracting substantial audiences, particularly among women under 25. The numbers are impressive; authors George Gene Gustines and Matt Stevens note that over 40 million women are active on the Webtoon platform, while a full two-thirds of Tapas’ users are women. I did a spit-take, however, when the authors boldly asserted that web comics were “tapping into an audience the industry had long overlooked: Gen Z and Millennial women.”

That statement ignores the fact many of these readers grew up with comics such as Sailor Moon and Fruits Basket as well as Dav Pilkey’s Captain Underpants and Dogman, Raina Telgemeier’s Smile, and Kazu Kibushi’s Amulet. Though DC Comics and Marvel are clearly important players in the comics market, Scholastic, VIZ, Kodansha, Yen Press, and Seven Seas serve a bigger readership than the Big Two, and have been doing so for over a decade. That point wasn’t lost on many of the people that Gustines and Stevens interviewed; creators and executives alike acknowledged the popularity of manga with American readers. The article’s authors, however, never acknowledge how much the old paradigm–of “Wednesday Warriors” buying floppies at the local comic ship–had changed before Tapas and Webtoon had a presence in North America. Anyone with vivid memories of visiting Borders or Barnes and Noble in the early 2000s could attest to the fact that girls were enthralled with manga, and viewed it as an appealing alternative to tights and capes.

OK… I’m hopping off my soapbox.

Junji Ito’s Lovesickness beat out Chainsaw Man, Kaiju No. 8, Robo Sapiens: Tales of the Future, Spy x Family, and Zom 100: Bucket List of the Dead for the title of Best U.S. Edition of International Material–Asia. I was surprised to see that this year’s field was so heavily focused on Shonen Jump titles; there’s nothing wrong with acknowledging popular series, but given how many other interesting projects were released in 2021, it seems odd that the nominating committee didn’t cast a wider net. [The Beat]

Also taking home an award from SDCC was illustrator Hidetaka Tenjin, who won the Inkpot Award for his work on such franchises as Macross, Gundham, and Space Battleship Yamato. [Anime News Network]

No SDCC would be complete without Deb Aoki’s Best and Worst Manga Panel. She was joined by Brigid Alverson (ICv2, School Library Journal, Smash Pages), Siddarth Gupta (Manga Mavericks), Laura Neuzeth (YouTube, TikTok), Ryley Moore (The Omnibus Collector), and Jillian Rudes (mangainlibraries.com). Looking over their master list, I was relieved to see I wasn’t the only person who thought Crazy Food Truck was kind of terrible. [Mangasplaining]

Square Enix recently announced two new manga acquisitions: My Clueless First Friend, a manga about a gloomy girl and the perky boy who befriends her, and Daemons of the Shadow Realm, Hiromu Arakawa’s latest fantasy series. Both series will debut in spring 2023. [Anime News Network]

Are you reading Helen Chazan’s work? Her writing is terrific, and may be the best thing that’s happened to The Comics Journal in an age. Her latest review focuses on Yamada Murasaki’s Talk to My Back,  a story about a middle-aged woman struggling with her role as housewife and mother. Chazan observers that Murasaki “confronts the reader with a woman’s life, a common woman’s inner world. Each chapter is a meditation on the sheer will it takes her housewife to survive under normalized abuse and oppressive demands, and the brief moments of beauty and humor that make survival possible.”

Also worth a look: Manga Bookshelf’s own Anna N. weighs in on Nina the Starry Bride, while the Anime UK News crew compile a list of their favorite CLAMP manga and anime.

Big news from Yen Press: the publisher is launching IZE Press, a new imprint dedicated to Korean webnovels and webtoons. The imprint will debut this fall with three series created by HYBE and global pop stars BTS, as well as six additional titles: Tomb Raider King, The World After the Fall, The Boxer, My Gently Raised Beast, The Remarried Empress, and Villains Are Destined to Die. Explains JuYoun Lee, the Deputy Publisher and Editor-in-Chief of Yen Press, “we couldn’t be more excited to get a chance to really open up the doors to put these beautiful books in the hands of English-language readers.” I’m still a little salty that the original manhwa boom went bust–remember Dokebi Bride or Goong?–but optimistic that the current market will be more receptive to Korean comics.

Are you looking for a job in the publishing field? Yen Press is currently advertising a range of editorial, marketing, and accounting positions. [Yen Press]

Justin Lin–best known for his work on the Fast & Furious franchise–has been hired to direct a live-action adaptation of One-Punch Man. [Deadline]

In honor of Pride Month, Latonya Pennington has posted a thoughtful exploration of the last 100 years of queer representation in manga. “A hundred years after the debut of the first yuri novel and twenty years after the publication of Wandering Son, LGBTQ+ manga has greatly matured in terms of their creators, content, and its subgenres,” she notes. “When it comes to manga with transgender characters and themes, there are more options than ever before… On the yuri and yaoi side of manga, both subgenres have moved beyond the teenaged schoolyard romances that were present at the genre’s inception. There are not only gay and lesbian manga featuring adult main characters, but also manga in different fictional genres.” [Popverse]

What LBGTQ+ manga would you like to see adapted into an anime? [Anime Feminist]

And speaking of queer manga, Kory, Helen, and Apryll discuss the merits of two recent titles: BL Fans LOVE My Brother?!, a done-in-one story from Tokyopop, and Even Though We’re Adults, an ongoing yuri series published by Seven Seas. [The Taiiku Podcast]

Ashley and Asher investigate Flower in a Storm, a short romantic comedy about a super-rich boy and a headstrong girl. [Shojo & Tell]

The gang at Honey’s Anime compile a list of manga that they didn’t see through to the end. [Honey’s Anime]

Brigid Alverson interviews Seven Seas’ Lianne Sentar and Lissa Pattillo about the challenges and rewards of bringing Asian webtoons to the US market. “I think a huge factor is the convenience of the format,” they note. “Do you have a smartphone and an Internet connection? Here: endless comics to scroll through (discreetly!) during your lunch break, wherever you are. If you look at Asian markets like Japan and Korea, there’s a huge audience of people reading comics on their phones while commuting in public transit like trains. I think newer generations in particular are adding comic reading to the many other leisure activities they do on their phone, and in North America, the boom in Middle Grade comics over the last 5-10 years has seeded millions of new readers who are comfortable reading long-form, sequential comics the way they would ingest other media (prose, TV, etc.).” [ICv2]

Over at Anime UK News, Sarah posts a glowing review of Gengoroh Tagame’s Our Colors, while No Flying No Tights declares Junji Ito’s Deserter a mixed bag. “That’s not to say this is a bad collection, but Ito has such wonderfully scary other pieces that many in this volume fell flat for me,” Kris notes. The latest Reader’s Corner is up at Beneath the Tangles, with brief reviews of Alice in Borderland, Golden Gold, and To Strip the Flesh.

Today’s Off the Shelf column featuring the Korean webcomic, or “webtoon,” Aron’s Absurd Armada has put webtoons in general on my mind. With only a handful licensed for North American release (mainly from online publisher NETCOMICS and iOS publisher iSeeToon), Korean webtoons represent a huge untapped source of East Asian comics.

So, this week’s Saturday Spotlight shines on Hana Lee’s An introduction to Korean webcomics, written for Manhwa Bookshelf in the summer of 2010. 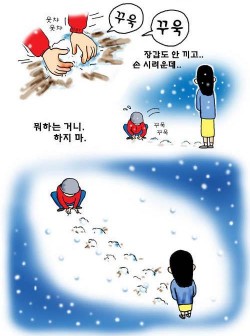 Read and dream of what we could be reading!