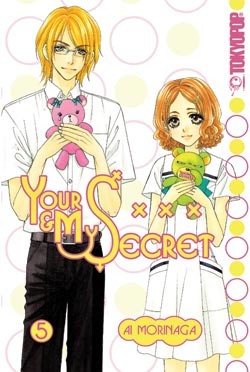 If you ever wondered what Freaky Friday might have been like if Jodie Foster had switched bodies with Leif Garrett instead of Barbara Harris, well, Ai Morinaga’s Your & My Secret provides a pretty good idea of the gender-bending weirdness that would have ensued. The story focuses on Nanako, a swaggering tomboy who lives with her mad scientist grandfather, and Akira, an effeminate boy who adores her. Though Akira’s classmates find him “cute and delicate,” they declare him a timid bore — “a waste of a man,” one girl snipes — while Nanako’s peers call her “the beast” for her aggressive personality and uncouth behavior, even as the boys concede that Nanako is “hotter than anyone.” Akira becomes the unwitting test subject for the grandfather’s latest invention, a gizmo designed to transfer personalities from one body to another. With the flick of a switch, Akira finds himself trapped in Nanako’s body (and vice versa).

The joke, of course, is that Nanako and Akira have found the ideal vessels for their gender-atypical personalities. Nanako revels in her new-found freedom as a boy, enjoying sudden popularity among classmates, earning the respect of Akira’s contemptuous little sister, and discovering the physical strength to dunk a basketball. Akira, on the other hand, finds his situation a mixed bag: for the first time in his life, his sensitive personality endears him to both male and female peers, but many of the things his maleness had previously exempted him from — housework and cooking, menstrual cycles, unwanted advances from boys — turn out to be much worse than he’d imagined. He struggles to feel comfortable in Nanako’s skin, insulted by the grandfather’s refusal to do chores and bewildered by his old buddy Senbongi’s growing attraction to him.