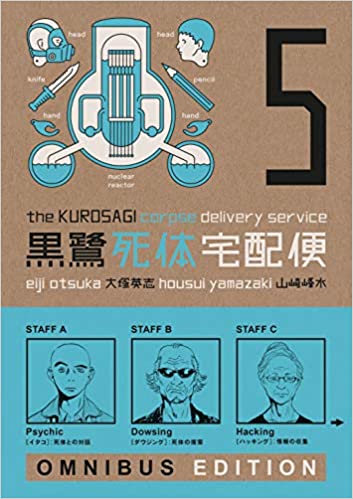 SEAN: I reviewed the 14th volume of The Kurosagi Corpse Delivery Service in June 2015, and it is now August 2022. Even by Dark Horse standards, this is wack, yo. That said, I’m just grateful the 15th volume has come out at all, even as part of an omnibus. It’s definitely my pick. Now who was everyone again?

MICHELLE: And this is also the week we get a new Black Lagoon volume! Granted, the prior one did come out in 2020 but there was a five-year gap before that. That said, this week I’ll go for She, Her Camera, and Her Seasons because queer love triangle from Morning Two sounds very interesting.

KATE: I’m ecstatic that there’s a new installment of The Way of the Househusband, a series that’s continued to be funny, even though it’s built on the slenderest of premises. Count me in for volume eight!

ASH: I’m always game for a new volume of The Way of the Househusband, too! But this week I’ll join Sean in choosing The Kurosagi Corpse Delivery Service because who knows when I’ll be able to pick it again? It’s such a great series.

ANNA: Way of the Househusband for me!

MELINDA: I’ve been reading so little lately, I feel a bit at sea here, but I think I’ll go along with Michelle’s pick, She, Her Camera, and Her Seasons, because a queer love triangle sounds like something I’d always enjoy!