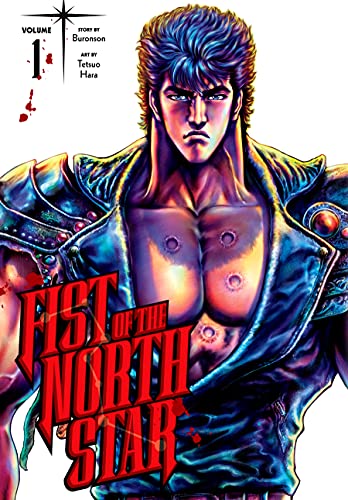 SEAN: Barring an unforeseen crossover between Fist of the North Star and Ooku, I suspect Manga Bookshelf is going to be leaning one way or the other this week. I’m going to go with FotNS, even though I’m not sure I can stay with it for too long, simply because of the sheer influence it had on so many later series.

MICHELLE: I’m in the same boat. That cover art for the first volume basically says, “Michelle, I am not for you,” but I’m just so grateful that VIZ is releasing this that I have to at least check it out. A little trepidatious about those exploding limbs, though. Not gonna lie.

KATE: My inner historian is thrilled to see Fist of the North Star back in print, but my inner reader is more excited about the latest volumes of Maison Ikkoku and Even Though We’re Adults, two series I’m actively enjoying and collecting at the moment. I’ll probably pick up FotNS to satisfy my curiosity, but I won’t lie: I share Michelle’s general reservations about exploding limbs.

ASH: Out of everyone here, I may be the person for whom Fist of the North Star most fully aligns both interest-wise and reading habits-wise. It’s admittedly been a while since I’ve read the incomplete older English edition/s, but I loved those volumes; I am so incredibly excited that this series is finally getting another chance in print in English.

MELINDA: Okay, I know I usually say that Fumi Yoshinaga always wins, but I can’t deny that I’m excited by the prospect of actually reading Fist of the North Star after all this time. It’s gotta be my pick this week.