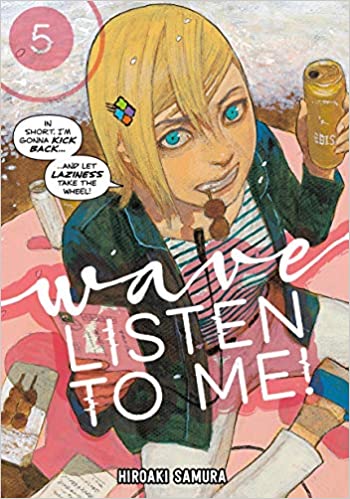 MICHELLE: I’m looking forward to getting caught up on Wave, Listen to Me! and Haikyu!! and Spy x Family are extremely high on my list of favorites, but there is not much that could top a new volume of Skip Beat! for me, unless it actually was an announcement about March Comes in Like a Lion.

SEAN: Agreed, March Comes in Like a Lion would be the perfect pick if it were licensed, but alas. There’s tons of great Shojo Beat titles out this week as well, including Oresama Teacher and Skip Beat!. But my pick goes to the light novel Re:ZERO -Starting Life in Another World-, which ends its fourth arc just before the anime currently airing does. I will just barely be able to finish it before I would have been spoiled.

KATE: I’m behind on SPY x Family, so I’ll plug another series I like: Wave, Listen to Me, an appealing dramedy about a twenty-something woman who discovers she has the voice and the presence to be a radio host. If you’re yearning to read about messy people getting their act together, Wave is your jam.

ASH: Despite greatly enjoying the series, I’m further behind in my reading of Skip Beat than I would like to admit. So my pick this week instead goes to another series that I’ve been enjoying Wave, Listen to Me, seconding everything that Kate has already said about it.

MELINDA: I’ve been embarrassingly behind on all these series, but I’m still pretty hyped up about Wave, Listen to Me!, which is the first of these I’d catch up on. So I guess that’s my pick!