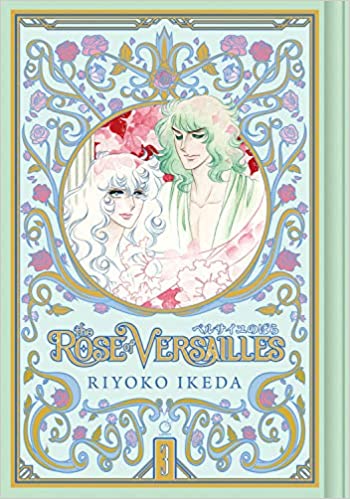 KATE: Since this is the final week of 2020, we decided to pick our favorite new manga of 2020 instead of highlighting something from the new arrivals pile. I’m torn between two books: BL Metamorphosis, which is a feel-good series that’s never pat, obvious, or cliche in its portrayal of BL fandom, and Blood on the Tracks, a creepy, atmospheric series from Shuzo Oshimi about the perils of helicopter parenting. Though Oshimi’s manga always explores uncomfortable territory–seriously, this guy must be a joy at cocktail parties–he is one of the most distinctive and expressive artists currently being licensed for the US market. Oh, and he has a killer sense of pacing.

SEAN: There are all sorts of new manga I could talk about, from surprise romantic sweetness Sweat & Soap to the hilarious and sweet thriller Spy x Family to, as Kate said, the fantastic generational series BL Metamorphosis. But for me, the series of 2020 is actually from 1972. The Rose of Versailles was a Holy Grail of manga licensing for so long, and for a while it looked like it was in development forever, but the finished product shows off how it was worth the wait. One of the most iconic manga ever.

ANNA: No question for me, to have The Rose of Versailles released in such a wonderful edition after waiting so long for it to come out is something to be celebrated. To have such an iconic manga available in English is such a treat, and it deserves to be manga of the year.

MICHELLE: Looking back, there were a lot of debuts I loved (Knight of the Ice, Blue Flag, With a Dog AND a Cat, Every Day Is Fun, Yoshi no Zuikara…) and some that I’m sure I will love when I actually manage to read them (BL Metamorphosis, The Rose of Versailles, Ping Pong…) but the series that only took a few pages to completely secure my eternal love and devotion was Spy x Family. It’s stylish and clever but doesn’t lack substance, the characters are endearing and interesting, and it also manages to be both funny and heartwarming. I hope to be reading this series for years to come!

ASH: Many of my top manga of the year have already been mentioned – the coveted The Rose of Versailles, the undeniably wonderful BL Metamorphosis, the distinctive Ping Pong. It was also a great year for alternative and indie manga with the release of The Swamp, Magician A, and not one but two volumes of the Glaeolia anthology. But, if I’m to be completely honest, the single volume of manga that left the greatest impact on me this year was the conclusion of Blank Canvas. Akiko Higashimura’s ability to combine humor with brutal honesty is unmatched, making this series both heartwarming and heartwrenching.

MELINDA: It feels too obvious to say, “I’ve had a life-changing year” in 2020, but with so much new going on for me, career-wise, there hasn’t been much time for reading manga. That said, there are a number of series I know I should be reading, and I know I’ll love them when I do. Top of the list is BL Metamorphosis, which has been getting rave reviews from my colleagues, and wow, Michelle’s endorsement of Spy x Family is not something I can ignore. But I’m going to go “obvious” yet again and give my pick of the year to the long-awaited The Rose of Versailles. I can’ count the number of times we’ve chanted the name of that title—first, waiting for it to be licensed, then waiting for it to actually appear. And from what I’ve seen, the wait was more than worthwhile. What a gorgeous release! It has to be my pick.