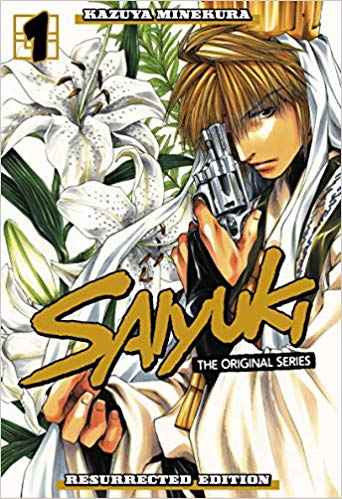 KATE: I think the best way to describe this week’s new arrivals is A Whole Lot of Stuff I’m Unlikely to Read. I will cop to being interested in Shuzo Oshimi’s Blood on the Tracks, though the part of me that read Flowers of Evil, Drifting Net Cafe, and Happiness wonders how many volumes I’ll read before it just gets too squicky for me.

ANNA: There’s a bunch of stuff coming out this week but I have to say what most interests me is the reissue of Saiyuki. You’ve got Jeeps! Monkey gods! Cigarettes! Guns! Pointy ears! Cranky Priests! Yokai! Is there a more 90s series than this? I don’t know, but I’m glad it is being released again.

SEAN: It’s definitely a Kodansha week for me – leaving aside Saiyuki, there’s also the debut of Sweat and Soap, and new volumes of In/Spectre and Magus of the Library. Kodansha is my pick!

MICHELLE: I’m intrigued by Blood on the Tracks, though I could not make it through Flowers of Evil, so perhaps that will happen again. And I’ll definitely be checking out Saiyuki and Kodansha’s latest digital shoujo debut, I Fell in Love After School. But what I am most excited about is a new volume of The Ancient Magus’ Bride. I love that series very, very much.

ASH: I love The Ancient Magus’ Bride, too! But this week my pick goes Magus of the Library – I’m really enjoying Mitsu Izumi’s fantasy take on librarianship and how surprisingly accurate it can be at times.

MELINDA: Even though I’ve still got my old copies of Saiyuki, I doubt I can turn down a chance to buy them again, especially in shiny, new hardcover editions. Though nothing will quell my longing for more of Minekura’s Wild Adapter, I’ll take what I can get. Bring me Saiyuki!