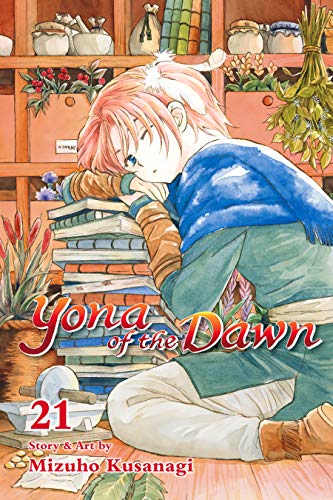 SEAN: There’s always an embarrassment of riches when it’s Viz week. That said, I can see no reason not to pick one of my favorite manga series of all time yet again. Yona of the Dawn is my pick.

ASH: Yona of the Dawn is a fine choice! (And one of my favorite shoujo series currently being released.) However, the debut I’m most curious about this week is Jujutsu Kaisen, also from Viz, so that’s what’ll get my official pick this week.

MICHELLE: I love Yona of the Dawn but since that’s covered I’ll go with volume 22 of My Hero Academia. Long have I wanted to get more of class 1-B and their various Quirks, as well as more Shinsou, and this arc of the manga delivers on both accounts.

KATE: Holy manga haul, Batman! I could recommend at least eight titles from this week’s new arrival list. If I had to narrow it down to just two, my nominations would be Drifting Dragons, a gorgeously illustrated adventure story about a team of whalers—er, dragon hunters—and the digital edition of Dream Fossil: The Complete Stories of Satoshi Kon, which I reviewed a few years ago.

MELINDA: There’s a lot of interesting stuff coming out this week, but since the rest of the Battle Robot seems to have it covered, I’ll speak up for Vertical’s 20th Anniversary Edition of Paradise Kiss. I’m not sure I’ll ever get over wanting more Ai Yazawa, but I’m also pretty sure that’s something I’ll have to content myself with wanting forever. Meanwhile, I love the fact that we’re repeatedly celebrating what’s already there.

ANNA: I can’t pick anything else other than Yona of the Dawn, it is such a great series.