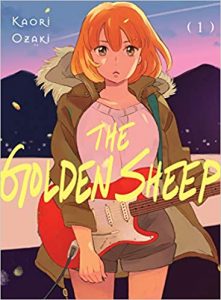 SEAN: While it’s tempting to go for the Ramen Noodles, or the Golden Sheep, both of which I suspect will be talked about by my fellow Manga Bookshelf peeps, it’s no surprise that I’m going with the 3rd volume of the Zaregoto series, SUSPENSION: Kubitsuri High School. When you get the third in a series after the first and second came out about ten years ago, it’s an event. Also, Ii-chan’s irritating, deliberately inscrutability is fun.

KATE: I’m torn between Ms. Koizumi Loves Ramen Noodles, which sounds like a carbohydrate lover’s dream, and Our Dreams at Dusk, which continues to be one of the best new series of 2019, offering a frank, thoughtful look at gender and sexual identity, so my pick is… both. Get ’em both. You won’t be disappointed.

MICHELLE: I’m definitely here for the ramen noodles and the golden sheep, but I’m most excited by a new volume of The Ancient Magus’ Bride!

ASH: It’s another great week of great releases! I can get behind everyone’s picks for the reasons already mentioned, but I’d like to take this opportunity to add The Miracles of the Namiya General Store to the mix as well. It’s a novel rather than a manga series, so this is really the only chance that I’ll get to pick it.

MELINDA: I’m not one hundred percent sold on anything this week, so I find myself waffling between The Golden Sheep and Ms. Koizumi Loves Ramen Noodles, but the melancholy does tend to have an extra pull for me, so I guess I’ll join Anna in choosing The Golden Sheep!