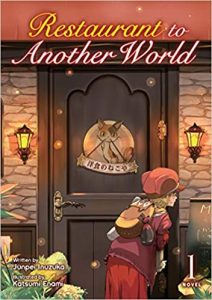 MICHELLE: In an unprecedented move for me, I’m picking a light novel this week! Restaurant to Another World has spawned various adaptations but I’ve experienced none of them. Still, it seems rather low-key and charming, which sounds lovely.

SEAN: So much I want to talk about… new Silver Spoon, new Hatsu*Haru, another silly isekai debut… for my pick, I’ll go with Animeta!. I’m a sucker for “manga/anime about breaking into the manga/anime industry”.

KATE: I’d be remiss if I didn’t plug Again!! and Silver Spoon, two of my favorite series, but this week, my heart belongs to Saint Young Men. Show some love for Kodansha and read it, since no one ever thought this one would be available in the US.

ASH: Hoo, boy, there’s so much coming out this week that I’m actively reading! Again!!, Gangsta, Golden Kamuy, and Silver Spoon are definite priorities for me, but I’ll be joining Michelle with the print debut of Restaurant to Another World as my official pick.

ANNA: I’m so far behind, but I’m gonna go with Gangsta as my pick!

MELINDA: Okay, I’ll go ahead and be the one to throw my whole heart at Silver Spoon. SILVER SPOON. SIIIIILVER SPOOOOOOOOON. What I’m saying is Silver Spoon.