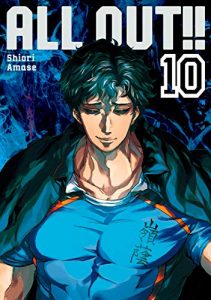 SEAN: It’s a week with a lot of series I’m not all that interested in, but there are some choices. I greatly enjoyed Ojojojo, which I’ve already reviewed. But I’ll go with Another World’s Zombie Apocalypse Is Not My Problem, another Cross Infinite World license that is (I believe) a shoujo-oriented webnovel (despite the zombies).

MICHELLE: I suppose I’ll go with All Out!! this week. I haven’t read any of the manga yet but the anime is a great deal of fun, with an adorably bookish lead who just happens to be physically imposing.

ASH: For me this week, Inside Mari is the series which holds most of my interest. Like I’ve mentioned before, the work is a fascinating exploration of gender that’s both compelling and at times very uncomfortable to read.

MELINDA: I’m sorry to say that there isn’t a lot that catches my eye this week. But that’s okay! I have a lot to catch up on, so I’ll probably focus this week on doing that instead of spending my money.

KATE: I’m with Melinda: there isn’t much on this week’s list that appeals to me, so I’ll make a plug for Jiro Taniguchi’s Venice instead. It’s like visiting Venice without the tourist hoards; you can enjoy the city’s unique architecture and turquoise lagoon without the endless cries of gondoliers, shop owners, and tour group leaders to spoil your reverie. As an added bonus, the book is in color, allowing you to better appreciate Taniguchi’s superb draftsmanship.