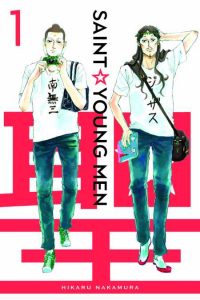 MICHELLE: I’ve wanted to read Saint Young Men for probably a decade. I had given up all hope of it being licensed here, so my gratitude to Kodansha is immense. I simply can’t even consider picking anything else.

ANNA: Me too, I’m absolutely amazed it is being translated.

SEAN: Yeah, Saint Young Men is my pick this week because it’s an Easter Miracle we’re even getting it.

KATE: I’m 200% on board with Saint Young Men, but I also think it’s worth reminding MB readers that VIZ will be releasing digital versions of the first seven volumes of Banana Fish. For folks who missed it the first time around, or who saw the anime and wondered how it compared with the source material, the new digital edition is a wallet-friendly way to dive into the manga.

ASH: Typically I can safely ignore digital releases since I have more than enough print manga to keep me busy, but when something like Saint Young Men is licensed even I have to take note! It’s definitely my pick, but I sincerely hope it might get a physical release in the future. We’ve proof that miracles can happen!

MELINDA: I feel like me choosing Saint Young Men while Kate is the one to bring up Banana Fish is the shocking plot twist nobody saw coming, but that is what’s actually happening, right now, today. I’m very happy that Viz is releasing digital versions of Banana Fish (though what I really want is a fancy, deluxe print edition), but Saint Young Men is something I genuinely thought we could never see in North America, and I can’t let that go. Not even for Eiji Okumura. And that’s saying something.