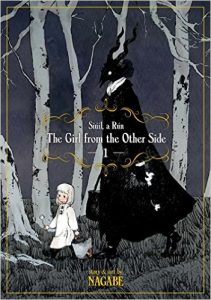 SEAN: There’s a significant amount of stuff I’m getting this week, but I’m going to go with Seven Seas again, as my pick is for The Girl From the Other Side: Siúil, A Rún, because it’s winter and I therefore want more moody fantasy.

MICHELLE: This week, that Wolf-boy will be mine!

KATE: I second Sean’s pick: The Girl From the Other Side looks like the kind of Seven Seas title that a grown woman could read in public without raising too many eyebrows. That cover is swoon-worthy! The Midtown Comics website indicates that we can expect 4″ – 8″ of new VIZ product on Wednesday, so there’s temptation in that pile, too. I liked the first two volumes of Bisco Hatori’s Behind the Scenes!! enough to pick up the third. I’m also still enjoying One-Punch Man–miraculously, it hasn’t gotten stale–so I’ll probably pick up volume ten.

ANNA: There are some great manga coming out this week, but The Girl From the Other Side seems most interesting to me. I don’t normally pick up many Seven Seas titles, but I am very intrigued.

ASH: The Girl From the Other Side is easily my pick this week as well. The series has been on my radar ever since it was reviewed at Brain Vs. Book, so I’m thrilled to finally be able to read its English-language debut.

MELINDA: Am I really picking a Seven Seas title for the second week in a row? Wow, I really am. The Girl From the Other Side is by far the most interesting of this week’s prospects to me. Well played, Seven Seas, well played.

MICHELLE: Ash, that link of yours has convinced me to defect! To the Other Side!