SEAN: Do you like stuff? Of course you do. Let’s look at some stuff! 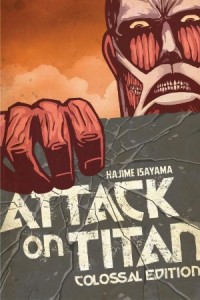 MICHELLE: Stuff and junk and stuff!

MELINDA: Bring on the stuff!

SEAN: If you’d wondered what the fuss was all about with Attack on Titan, and also wanted something heavy enough to beat small children to death with, have we got the release for you! Attack on Titan: Colossal Edition collects the first 5 volumes of the series into one massive, thousand-page TOME. And of course, it apparently has some added content so that obsessives must buy the whole thing again. If you haven’t seen this series before, get ready to see what all the fuss is about and ask “why is the art so crappy?”

ASH: This thing is going to be a HUGE monster of a book. I’m happy with my individual volumes, but I would be curious to see the the Colossal edition in person.

MICHELLE: Ugh. I must say the thought of hefting this thing doesn’t entice me to catch up on the series.

ANNA: I’m sort of tempted by this, since I bought the first book when the kindle version was on mega sale but haven’t gotten the subsequent volumes.

MELINDA: Hmmm… I’m tempted here. Kind of. Not sure I have a shelf big enough.

SEAN: Cage of Eden trundles along with Vol. 14. Will this be a monsters eating people volume? A fanservice-laden nude girls volume? A ‘I really liked Lost and want to rewrite it with Japanese students’ volume? Who can say? Most likely all three, I suspect. 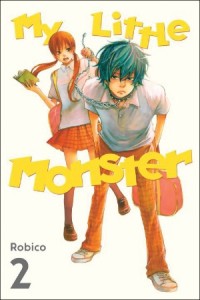 My Little Monster was a lot of fun, even if I had issues with the male lead being a manic pixie dream guy to a certain degree, and I look forward to seeing how he and our heroine develop.

ASH: I rather enjoyed the first volume of My Little Monster. Plus, there’s a pet chicken!

MICHELLE: I love the pet chicken with every fiber of my being.

MELINDA: Pet chicken! How did I not buy this?

SEAN: Remember back in February when I discussed Wallflower 32 and they bumped it back to May without telling me? Well, here it is, still in May for now.

I apologize to Tokyopop. The fact that their one Japanese series is only available via Right Stuf now means I forget to add it to these lists, EVEN WHEN IT IS SITTING NEXT TO ME AS I MAKE THEM. Aheh. Anyway, Hetalia Axis Powers 6 was out last week.

ASH: I really do wonder how well this partnership between Tokyopop and RightStuf has been doing, and what other projects we might see because of it.

ANNA: Demon Sacred! Shinobi Life! Sky Blue Shore! Oh, how I miss you, but I have no hopes of reading you in English.

SEAN: BTOOOM! continues to make me count the number of O’s in its title, even now that Vol. 6 drops.

And now I want to add a third o to Goong, whose 15th volume is out, to the delight of the rest of the Manga Bookshelf team. 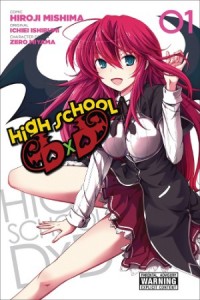 SEAN: In general, I have a better record with Yen than Seven Seas when it comes to otakubait series. And yet High School DxD – with its harem plot, promises of fanservice, and ‘angels and demons’ fantasy worldbuilding – seems to worry me. I’m watching you warily, Vol. 1.

MELINDA: That sounds… well, probably not for me.

SEAN: Jack Frost 10! Wow, how many decapitations have happened by now?

Kadokawa has decided they don’t want the manga to come up with new content that the novel hasn’t covered (bar the odd original short chapter), so The Melancholy of Haruhi Suzumiya will be ending its manga version soon while they wait for the next novel to appear. Here’s Vol. 18, featuring new character Yasumi on the cover.

Kazumi Magica has been one of the longer franchise spinoffs of the Puella Magi-verse, but it comes to an end here with Vol. 5. Will it have a happy ending? Our good friend Kyubey says he’s very happy!

Soul Eater has gotten up to Vol. 20, and I think is getting closer to its massive final arc. More to the point, this volume contains one of the scariest manga chapters I’ve ever seen – full stop, any series.

MELINDA: Really? Hm. Maybe I should check it out.

SEAN: Triage X has hit Vol. 6. See above about why I can’t always trust Yen when it comes to fanservice-laden series. At least I don’t think this is based on a series of light novels…

Lastly, we get another omnibus of Until Death Do Us Part, which features characters named Mamoru, Haruka, and Wiseman, yet is not actually like Sailor Moon at all.

MICHELLE: I need to catch up on this. I liked what I read of it.