SEAN: Hello, and welcome to Manga The Week Of: Expanded Version! We liked chattering about JManga so much that we decided to let it carry over into my regular feature. So pull up a chair, sit back, it’s the first week of the month, so Midtown’s list is… tiny.

Oh dear, they’re doing it again. (Note: as of 5pm Wednesday. If they update their list again later, this is all irrelevant). Sometimes Viz shows up late to Midtown. No idea if it’s due to Hurricane Sandy, Diamond, or mere happenstance. As it happens, I checked with my own comic store, and they seem to be getting in Viz’s 11/6 releases on 11/6. So I will proceed to break them down here as well, assuming most comic shops not affected by possible Sandy distribution delays will get them.

But first, our fine folks at Kodansha have some stuff coming out! Actually, it came out everywhere else today. But when you’re Diamond Comics Distributors, you can … well, do whatever you want. So they ship Kodansha a week late.

In any case, Air Gear 26 is out, continuing the great Air Gear tradition.

Mardock Scramble continues our 6 theme by having Vol. 6 out.

MJ: I am several volumes behind on Mardock Scramble, but I really liked it early on. Should I try to catch up? Anyone have an opinion?

MICHELLE: I find the concept interesting, but never started it and thusly haven’t bought beyond the first couple of volumes. Also, “the great Air Gear tradition” made me snicker.

SEAN: And, carrying the 6 theme to a third release (hey, 666. Happy Halloween!), Negima! is up to Volume 36, meaning it’s close to completion. I see Asuna is on the cover. Is she back in action?

MJ: I do sort of consider Ken Akamatsu to be the devil, so that works. (Please don’t hit me.)

MICHELLE: I really have tried to approach his stuff with an open mind, but I just can’t like it.

SEAN: Finally, ruining the 6 theme by being a Vol. 8, Sailor Moon ends its S arc and starts Super S. Let me tell you folks who only know this arc from the anime: you are in for a treat.

MICHELLE: The outers are in it, the outers are in it! On the sad side, however, Fish-Eye and Tiger’s-Eye appear so briefly in the manga version as compared to the anime that it’s kind of a blink-and-you-miss-them situation.

SEAN: Yen Press was supposed to have Vol. 2 of Soul Eater NOT! out two weeks ago, but for some reason it got delayed to this week for comic shops. This fusion of the Soul Eater Universe with the moe aesthetic is taking a while for me to warm up to, but I’ve heard it’s not all light and fluff. Will there be creepy art to give nightmares in the best Soul Eater tradition? Let’s hope so!

First, Bakuman enters its final quarter with Vol. 16, and continues to have a love/hate/mostly hate relationship with its female characters, but is a lot of fun nevertheless.

MJ: I have to admit I’ve been addicted to Bakuman since the beginning, even when it’s really pissed me off. So I’ll be picking this up for sure.

KATE: I freely place myself in the Feminists Who Loathe Bakuman Camp. The authors’ treatment of the female characters — especially the smart, competent ones — is a deal-breaker for me, even though the manga shop talk is fun.

MICHELLE: Like MJ, I get annoyed, but then I keep reading. Some of the kooky supporting cast is a lot of fun, which helps.

SEAN: Bleach has Vol. 50 and 51, which I’m pretty sure don’t star Aizen. What is this strange Aizen-less manga I see before me?

MICHELLE: I am soooo looking forward to the end of this Hueco Mundo arc. I don’t know any Bleach spoilers, so I have no clue what’s coming next, or whether it is better, but ye gods, this has been dragging on.

SEAN: A new Blue Exorcist! At least for those of you who didn’t read it digitally ages ago. One of the best current Jump titles, and always a treat. 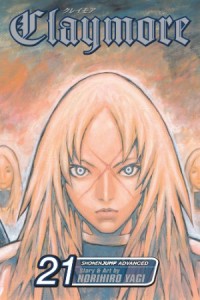 Claymore hits Vol. 21, and the cover simply glares at you balefully, daring you to pass it by. Do you really want to take that risk?

SEAN: We’re not quite caught up to Japan with Kamisama Kiss, so the volumes are still coming out fast and furious. Here’s #11, which features a New Year’s theme just in time for November! Well, surely it’s New Year’s somewhere…

Kimi ni Todoke hits Vol. 15 here (it is caught up, so we’re seeing it less now), and Chizuru and Ryu are standing pensively back-to-back, not looking each other in the eye. We all know what that means. SMOOCHIES! …well, OK, probably not. But I hope they get a nice juicy plot arc.

MJ: This series just never stops being charming, does it?

MICHELLE: No, it doesn’t.

SEAN: Naruto is up to Vol. 59! Holy crap! I admit I haven’t read it since Vol. 6, so the cover makes about negative zero sense to me, but hey, it sells amazingly well, so therefore is doing many things right.

In case you missed the Nausicaa Manga when Viz released it a few years ago, they’re now putting it out again in a handsome box set. It’s a gorgeous manga, as well as environmentally conscious. Pick it up today.

MJ: I am thrilled about this, I have to say. I did miss this when Viz originally released it, so I’m incredibly pleased to have another shot at it.

KATE: I’ve also been looking forward to the new edition of Nausicaa. The old edition — though nice to look at — was printed on crummy paper that didn’t age well, and I’ve been eager to replace mine with a cleaner, newer version.

SEAN: Wasn’t it released on environmentally correct paper? That may be why…

MICHELLE: Somehow I missed this news! I have an awesome local library with a genuinely huge manga selection, so I was lucky enough to read Nausicaa (the four-volume Perfect Collection edition) that way, but I might need a handsome box set of my very own!

SEAN: Neon Genesis Evangelion is (digitally) day/date with Japan! And out only a week later in print! This is truly amazing, and big kudos to Viz for pulling it off. Best of all, this is the version with the happy ending! … OK, I lie, it’s not. It’s still depressing. But hey, maybe Shinji is more proactive? The manga’s been good at that.

KATE: The NGE omnibus has been sitting in my review queue for a few weeks. I’ve never read or watched any NGE stories, so I’m hoping that VIZ’s new three-in-one edition will make it easy for me to familiarize myself with this enormous, seemingly inexhaustible supply of material.

SEAN: Did I say holy crap when Naruto hit Vol. 59? Well, One Piece is up to Vol. 65! And… well, is still in the Fishman Island arc, but can’t have everything. I believe this is a ‘battle-only volume, the kind Jump readers love! If only as it reads smoother in Volume than it does week-to-week.

SEAN: Another manga I tend to push as much as possible, Oresama Teacher has hit its 11th volume. The subject is Christmas! … OK, what with that and New Year’s, Viz is playing mall music at us far too early. But I’m not complaining!

MICHELLE: I like Oresama Teacher, but I do sort of inwardly groan when shoujo manga feel obliged to hit all the holidays. Hopefully this’ll be one of those times where the series is genuinely funny.

SEAN: The giant huge box set thing that is Ouran High School Host Club Vol. 1-18! It’s a fun series, if you haven’t checked it out, and need a Christmas Present for your wish list, this is a great choice.

KATE: I’ve long thought of Rosario + Vampire as Twilight for guys: it’s got impossibly beautiful female monsters who inexplicably love an unremarkable human. While none of the vamps in Rosario sparkle, they do show a lot of cleavage and leg — the next best thing, I guess, if you’re a fourteen-year-old boy. It’s not my cup of tea, but I can definitely understand its appeal.

SEAN: You don’t need vampires to have girls falling all over themselves for a nebbish guy. See: any harem manga ever. 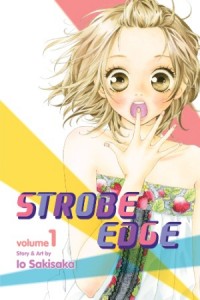 SEAN: NEW SERIES ALERT! Strobe Edge, from Io Sakisaka, is a school romance about a girl who wants to find out what love is and the school heart-throb… um, haven’t I heard this premise before? Oh right, Japanese shoujo manga. Despite that, this is apparently a lot of fun. I heard that people are… NICE in it. Gasp! It ran for 10 volumes in Shueisha’s Betsuma.

MJ: I’ll admit that Kate’s review gave me some pause about picking this up, but it’s really hard for me to pass up new shoujo.

KATE: I freely admit that I’m turning into a big curmudgeon when it comes to shojo manga; I’ve read one too many stories about nice, unassuming (read: boring) girls who develop crushes on hot guys. Strobe Edge isn’t bad, just predictable as taxes. Give me Maria Kawai and her razor-sharp barbs any day.

MICHELLE: It doesn’t look like it’s going to be a manga that makes me explode into hearts, but I’m definitely planning to give it a chance.

SEAN: Speaking of series I hadn’t realized hit double volumes, there’s Tegami Bachi! Presumably the mail must still get through for these letter bees.

Vampire Knight, which I still can’t quite quit, hits Vol. 15. If only it weren’t so damned addictive. Also, vampires!

Lastly, there is We Were There, which has no vampires whatsoever. It’s almost over, but there’s still this volume and 16 to go. So there’s LOTS more ways the author can make her character’s lives miserable! (Admit it, that’s why we love it. This is *the* angst shoujo.)

MJ: I love this “angst” shoujo. I really, really do. It’s a longtime favorite, and I never miss a new volume.

MICHELLE: I love it, too. Volume 15 is on the top of my review pile!