SEAN: Welcome to a new feature here at Manga Bookshelf, which for want of a better title will be called JManga The Week Of. As you might guess, it is similar to my Manga the Week of posts, in that we break down what’s coming out next week from JManga (and possibly other e-publishers if I can find an easy way to get their release dates) and discuss what we’re looking forward to, what we’re curious about, what what we don’t really see the appeal of at all.

Since this is an inaugural post, I will start with THIS week’s JManga titles, then move on to next week. So it’s a double dose!

First off, we’re getting more “rescues” from the former folks at Del Rey, consisting of the titles they didn’t bring with them to Kodansha. School Rumble has 8 more volumes, which brings it up to date with what Del Rey had put out. This would mean Vols. 17-22, as well as the one-off sequel School Rumble Z, would be original JManga translations/productions. School Rumble is a comedic harem title from Weekly Shonen Magazine, and was quite popular among the blogosphere when it was coming out. And by popular I mean folks read the scans avidly. Cough. When the manga ended, as most harem manga do, with an ending that did not please everyone, the fandom died faster than Ali MacGraw. I do hope that enough time has passed that said fans return to the fold to support the remainder of the series.

MELINDA: I’ve always been sort of curious about this title—I even bought the first volume at one point, but never read it—so JManga’s acquisition here is definitely of interest to me. That said, there are Del Rey titles I miss much, much more (*cough* Nodame *cough*) so I’m not quite jumping up and down yet.

MICHELLE: I feel exactly the same way, Melinda. I’m not generally interested in shounen harem manga, but there’s just something about this one that I find kind of appealing. Still, I’m more in a state of holding my breath for other things—aside from Nodame, I’m hoping that JManga will finish Papillon and Ghost Hunt!

SEAN: Re: School Rumble. It’s an interesting title as I suspect that it changed considerably from what the author had planned. It’s very much a gag manga at the start, with few harem elements. Then the author had its male lead, Harima, interacting with two polar opposites, the tsundere princess-type Eri and the meek young housewife-type Yakumo, and popularity soared. (Note that Tenma, the actual female lead, has never been as popular – in fact, Western fans tend not to like her much, mostly due to her childish characteristics.) Combine that with a truly huge cast, and you get a strange kudzu-like manga with multiple genres (though it never quite backs away from its gag manga roots, except towards the end).

Re: Nodame Cantabile, I have a theory about that. There are a few Del Rey hiatus series still not on JManga, such as Alive: The Final Evolution and Moyashimon. But Nodame is the most prestigious of those, and that may be the problem. It’s one of Japan’s biggest sellers. It’s huge in other countries. It has anime and live-action adaptations. And I love JManga and what they’re doing, but Kodansha giving them all these titles is very much a “we have no more interest in getting these out in print, so here.” I can see Kodansha thinking to themselves, “we need to hold onto Nodame in hopes that we *can* get it back into print, as it’s a flagship josei title.”

Pastel, another harem manga from Shonen Magazine (though after Vol. 6 it moved to the monthly Magazine Special), has also caught up with Del Rey releases, as Vols. 9-14 are out. Pastel is *still running* in Japan, with Volume 33 due out in November. Given it is, at heart, an ecchi harem manga bout a weak male lead, the various busty girls who fall for him, and their series of misunderstandings, the mind reels. I didn’t get very far into Pastel, but I know it has fans who enjoyed its slice-of-life, sometimes sweet story, so hope they enjoy seeing it go on. And on.

Speaking of license rescues, we have a new old series from Mag Garden’s Comic Blade. The first volume of Elemental Gelade came out from Tokyopop in 2006; they put out 12 of the 18 volumes before it was dropped. Digital Manga Guild re-licensed the series earlier this year; I’m not sure if this is their translation. In any case, it’s a fantasy series with pirates and living weapons, and also spawned its own anime.

MELINDA: While I’m always happy about manga becoming as accessible to people as possible, am I the only one who finds duplicate releases like this a little confusing?

SEAN: Ninja Papa hits Volume 3 of its seven volumes. As I’ve noted before, no one will ever accuse this of being great literature. But if you’re a middle-aged flabby balding guy and you want to imagine yourself doing mad ninja tricks, gorily killing bad guys in sprays of blood, then returning home to make love to your gorgeous hot wife… well, then you might want a subscription to Futabasha’s Manga Action in general. But this is *particularly* for you.

MICHELLE: … I can totally see this plot being yoinked for an American movie.

SEAN: Clair Voyance is a new manga from Ohta Shuppan’s online magazine Pocopoco. It’s actually by a Singaporean artist, FSc, aka Foo Swee Chin. She has done some alternative comics for Neko Press and Slave Labor Graphics. It seems to be about Monster Helpers rather than Monster Hunters, and I’m intrigued to see where it’s headed.

MELINDA: Thanks to Kate’s recommendation, I’m definitely planning to pick this up!

MICHELLE: Yeah, that one looks neat!

SEAN: And there’s Vol. 4 (of 7 and still going) of My Sadistic Boyfriend, which runs in Futabasha’s little known shoujo magazine Comic Mahou no Island. From what I’ve gathered, this fits squarely in the Black Bird/Hot Gimmick/B.O.D.Y. mode of “I love this guy who treats me horribly and I let him as I am weak and he is sexy.” I admit it is not my genre, but Viz apparently sells them like hotcakes (well, mildly warmcakes), so the audience is there. Has anyone compared this one with the classics like Hot Gimmick? How does it stack up?

MELINDA: “From what I’ve gathered, this fits squarely in the Black Bird/Hot Gimmick/B.O.D.Y. mode of ‘I love this guy who treats me horribly and I let him as I am weak and he is sexy.'” In a word, “Ugh.”

MICHELLE: I admit that I have judged this one purely on its title and did no further investigation regarding it. Also, I snickered at mildly warmcakes. :)

SEAN: Next up, JManga just announced 5 titles for release next Thursday.

Neko Ramen is another Mag Garden Comic Blade license rescue from Tokyopop, and is a cute 4-koma series about, well, a cat who owns a ramen shop. Funnier than it sounds, this was a surprisingly fun series when it first came out, and I’m pleased to see it here. 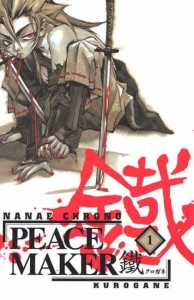 Peacemaker Kurogane is also a Comic Blade title, and this one has a long and tortured publication history. ADV manga (remember them?) put out Vols. 1-3 a long while back, then went under. Tokyopop revived the series and released Vol. 4, then they moved on. Now JManga has reissued the first 2, with presumably plans for more. I hope it catches on this time. It’s a Shinsengumi book, supposedly chronicling the life of Tetsunosuke Ichimura during the Meiji period and his attempts to get revenge.

MELINDA: Here’s a title I’ve always wanted to read! I’m pretty excited about this one, actually. I was a fan of the first volume of Momo Tama (from the same artist), though I never managed to pick up subsequent volumes, and I’ve been curious about this series ever since.

MICHELLE: Peacemaker doesn’t engender much of a response from me, but I am very pleased to see Neko Ramen arrive! I found the series to be a pleasant surprise, and though some volumes weren’t quite as giggle-inducing as others, it’s definitely among the series I mourned when TOKYOPOP went under. It fits in well with JManga’s quirky foodie manga, too!

KATE: I’m also glad to see Neko Ramen series get a second chance with readers. In the abstract, Neko Ramen sounds like a one-joke manga — hey, waiter, there’s a cat hair in my soup! — but the strips manage to wring fresh humor out of Taisho’s misguided promotions, menu items, and interactions with long-suffering customers. I don’t know if JManga will preserve the original Tokyopop translation, but I hope they do; the Tokyopop re-write has the same snappy quality as an Abbott and Costello routine.

SEAN: Lastly, there’s a new classic literature adaptation from Variety Art Works. This publisher specializes in adapting famous works of literature (both Japanese and worldwide, though the latter is what JManga has mostly focused on) in single volume manga format. This new title adapts Sun Tzu’s The Art of War, which, um, is really more of a lecture than a story, but hey. It’ll be quite interesting to see how this gets presented.

KATE: I’ve read a few of these “Illustrated Classics” — including the adaptation of Osamu Dazai’s No Longer Human — and thought the artwork was pretty bad. Their great redeeming virtue is that they hew closely to the original texts, so I suppose they have some value as Cliff Notes.

SEAN: So, what are you picking up this week?