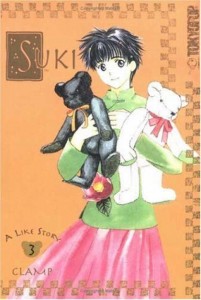 The brilliant sociopath, the hooker with the heart of gold, and the naïf are my three least favorite character types, the first two for their tiresome ubiquity in popular culture, and the third for being tiresome: when was the last time you read a story about a sweet, innocent person that didn’t make you feel horribly manipulated or horribly jaded? Imagine my surprise, then, at discovering CLAMP’s delightfully odd series Suki: A Like Story, which revolves around a brilliant but impossibly naive teenager who trusts everyone, reads picture books, and talks to teddy bears. I thought I’d be tearing my breast in agony by the end of the first chapter; instead, I quickly succumbed to Suki‘s charms and even suppressed a sniffle or two in the final pages.

Suki succeeds, in large part, because the supporting cast has the same reaction to sixteen-year-old Hinata Asashi as the reader. Hina’s boundless enthusiasm endears her to best friends, Touko and Emi, though both roll their eyes at her inability to read social cues or grasp ulterior motives. Touko, in particular, is keen to protect her pal; as we learn in the second volume of the series, Hina has been kidnapped nine — count ’em — times over the course of her short life. (Hina’s dad is rich and willing to pay ransom for the safe return of his daughter.) Though an ordinary person might be deeply scarred by such experiences — or least more suspicious of strangers — Hina remains cheerful and oblivious to signs that a tenth abduction might be in the works.

Those signs include a string of odd coincidences: the long-vacant house next to Hina’s is suddenly occupied by a handsome young man who just happens to be Hina’s new homeroom teacher, Shiro Asou. Shiro just happens to be around whenever Hina is in need of an escort, or rescuing. And Shiro just happens to conduct clandestine meetings when the class goes on field trips. The ever-vigilant Touko quickly suspects the worst, but Hina interprets Shiro’s gruff yet solicitous behavior as concern, and develops a chaste crush on her sensei.

Watching Hina come to terms with her feelings is a painful but believable process. At first, she revels in any opportunity to spend time with Shiro, whether they’re raking leaves or walking home from school. Later, she begins to see parallels between their relationship and the relationship between two characters in a favorite picture-book series. (More on the series-within-a-series gambit in a minute.) In the final chapters of the book, Hina develops a more realistic idea of who Shiro is, eventually telling him how her feelings have evolved from youthful naivete to adult maturity. “At first, I fell in love with you because you did so many things I loved,” she confesses. “But from now on, Asou-san… whatever you do for yourself… I’ll love you for that.”

That Hina’s epiphany is facilitated, in part, by reading a children’s book may strike some readers as hopelessly twee. Suki — the name of the story-within-a-story — isn’t subtle; using bears as surrogates for Hina and Shiro, Suki charts the budding friendship between a small, chatty bear and her large, bespectacled neighbor. The parallels between the main plot and the story-within-the-story are obvious, but they serve an important purpose, reminding us that Hina is struggling to reconcile new, adult feelings with her decidedly child-like worldview.

Art-wise, Suki: A Like Story is one of CLAMP’s simplest — one might even say plainest — series. Tsubaki Nekoi’s style is much less Baroque than her cohorts’; she favors ordinary street clothes over epaulets and garter belts, and more realistic physiques over exaggerated shoulders and sharp chins. By shedding the fanciful trappings, Nekoi focuses the reader’s attention on faces, allowing us to fully register how each character is feeling. Nowhere is that more evident in the way Nekoi draws Touko. Touko is by far the most mature girl at Hina’s school, and the one most attuned to signs of adult malfeasance. Though Touko voices her concerns, the sadness in her face reveals a level of understanding that might be rooted in her own experiences, not just Hina’s: 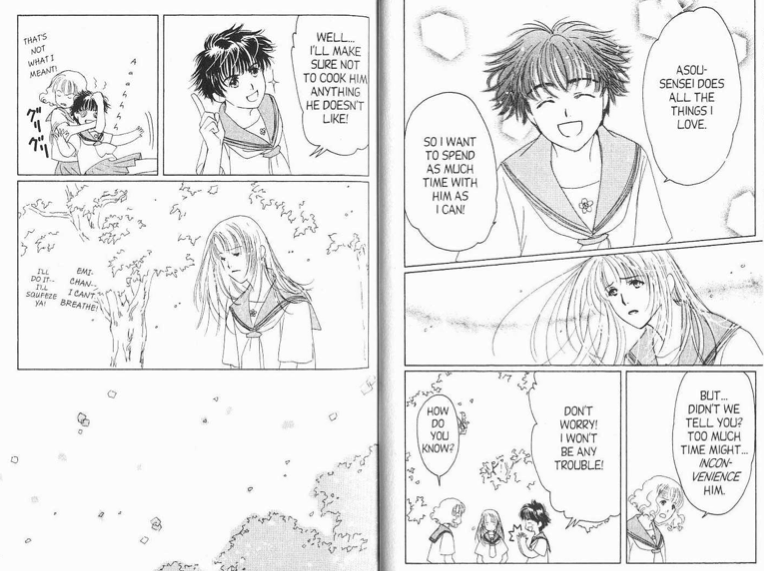 Though Hina has a much more innocent personality than Touko, Nekoi resists the temptation to draw Hina as a child; Hina is clearly meant to be a teenager, given her size and athleticism. Hina’s transparent facial expressions, wide-eyed enthusiasm, and sudden, darting movements, however, hint at the discrepancy between her chronological and emotional ages; she bounces and skips and claps her way through the story, reacting with intense glee at even the briefest exchange with Shiro: 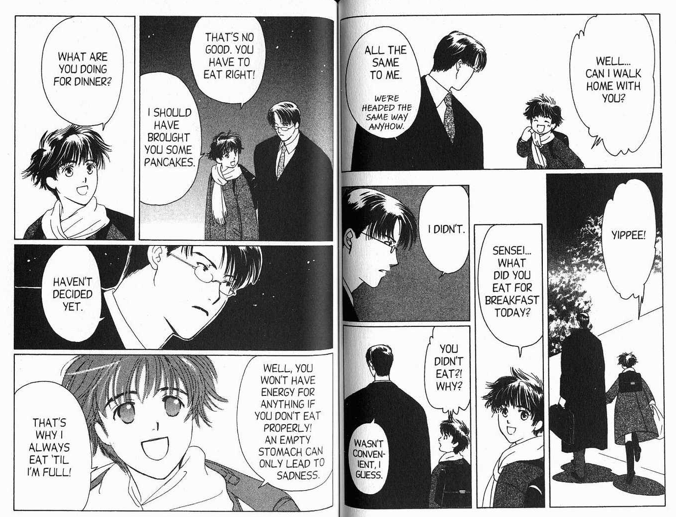 The art isn’t perfect by any means. Shiro’s proportions, for example, often look wrong: he has a tiny head and an enormous frame, and is so much taller than the other characters that he’d be NBA draft material in real life. Suki, the book-within-a-book, is also problematic. It’s quite possibly the dullest picture book I’ve read, a series of simple drawings accompanied by large, undifferentiated blocks of text. I certainly wasn’t expecting Sylvester and the Magic Pebble (or A Kiss for Little Bear), but the flat, unimaginative illustrations make it harder for the reader to imagine why someone Hina’s age would find the story so compelling: 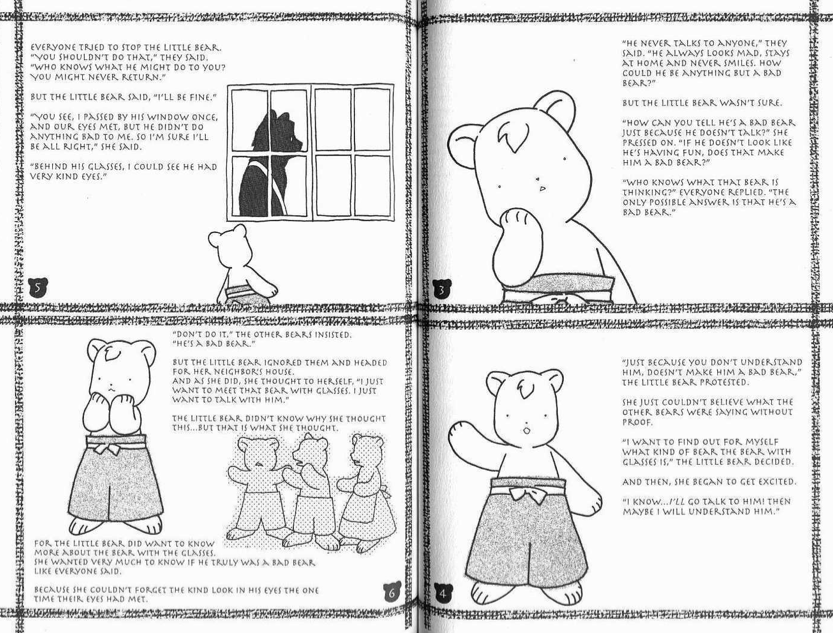 Perhaps the most interesting thing about Suki is that Hina’s realistic coming-of-age story is embedded within a thriller. The suspenseful elements of Suki are handled with skill and restraint, even if they are a wee bit ridiculous. (OK, a lot ridiculous: who allows their frequently kidnapped sixteen-year-old daughter to live alone with her teddy bears?!) The few action scenes are brief but crisply executed, adding some much-needed variety in tone and pacing to the story. If the ending is a little too tidy, CLAMP avoids the trap of pandering to the reader’s expectations of what should happen; there’s a note of melancholy in that final scene, joyous though Hina may be.

Readers curious about Suki: A Like Story won’t have too much difficulty tracking down used copies on eBay or Amazon; the complete series will set you back about $20-30.