It’s been quite a while since my last installment of this feature, largely due to the fact that my DMG work itself has required a great deal of my time. Now that I’ve completed a number of my current assignments, I’d like to take the next few weeks to break down my experience, and also to look into how the Digital Manga Guild is being received so far by the online community, both members and fans.

Readers may recall that Guild members finally received contracts back in June of last year. Then in late July, after great deal of angst and discussion, the group I’d joined finally fell apart, due to the others’ reluctance to sign their DMG contracts.

Though I’m not able to get into the details of my former group’s dissolution, I can tell you that the other members’ decisions were less driven by issues with the contract itself (though these certainly were a factor) and more by an ongoing dispute with DMG management about some of the group’s qualification tests, about which they’d been given conflicting information from the start. Overall, lack of effective and accurate communication between DMG’s caretakers and its members is what killed my original group, something which continues to be an issue for the Guild (I’ll talk about that more later).

In September, I put my name back into the pool of editors without a group, though I wasn’t especially hopeful about snagging one. 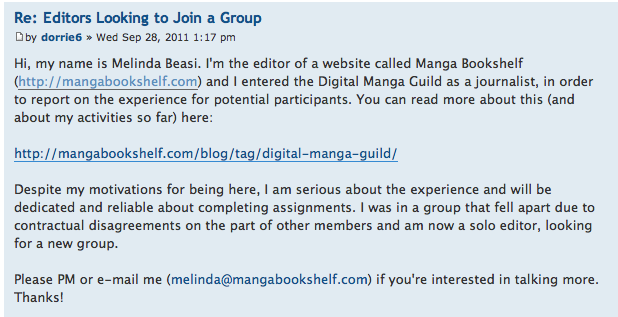 Given the overwhelming number of groupless editors in the mix, I thought it likely that my own reporting was pretty much done, and with that in mind, asked the active group BLBangBang if they’d be willing to write up a report on their own experiences, since I had failed to get far enough to actually begin work. They submitted their report in early October, just a few days after I was contacted by Morgan, leader of the group Purple Prose Killers, who thankfully invited me to join her team.

Though I’d finally found a group (again), it would be a while before I’d have real work—at least that’s how things originally stood. The PPK had already received their first batch of assignments, and the work had been distributed and signed off on with the DMG. I’d get my own stuff to work on the next time around, Morgan said, and in the meantime, I offered myself up for final proofreading or anything else the group might need.

A few weeks later, it became clear that the group’s existing editor was going to have difficulty making deadlines for all three of her titles, due to some unexpected personal conflicts. I agreed to take over two of these titles (Keiko Kinoshita’s Yuri Sensei is in a Good Mood Today as Well and A Lovely Day with Yuri Sensei) to help out, though we were told by DMG that I wouldn’t be able to receive credit (or payment) for them, as the paperwork had already been signed. Since I wasn’t accepting payment anyway, I did not see this as a problem. My priority was getting some real working experience so that I could continue my report. (Also, as a big fan of Kinoshita, I’ll admit I was pretty psyched.) In the meantime, DMG assigned us an additional title “for Melinda to work on,” so I’d have something official to show for myself.

By the end of November, the group’s original editor was entirely MIA. In early December, she was formally removed from the group, at which point DMG agreed to redo the original paperwork so that I would officially be named as editor on all three titles.

Though I’d been working on the two titles I’d taken over, suddenly I had four books on my docket, and the first deadline (for the title I hadn’t been working on) was approaching fast! I was officially named editor on Syuko Nishimura’s Career Gate on December 6th, with a final submission deadline of January 15th. Though the original editor had completed the first chapter, I decided it would be more consistent for me to start from scratch.