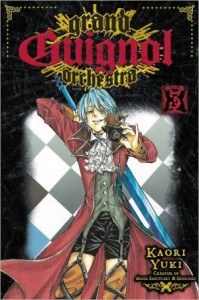 In his review of TRON: Legacy, critic Andrew O’Hehir made a distinction between movies that are boring because they make the viewer keenly aware of time’s passage — what he calls “intentional and challenging boredom” — and movies that are boring because they overstimulate the viewer — what he calls the boredom of “endless distraction and wall-to-wall entertainment.” Kaori Yuki’s latest effort, Grand Guignol Orchestra, is a prime example of the latter, a relentlessly melodramatic horror story that never pauses to catch its breath. And while that kind of manga can be engrossing, Yuki’s unwillingness to vary the tone or pace robs Grand Guignol Orchestra of its power to shock, amuse, or arouse anything resembling a real human emotion.

In other words, it’s boring.

The third volume isn’t boring for lack of effort. There’s a lengthy set-piece in which Eles, Gwindel, and Lucille engage in hand-to-hand combat with an evil, cross-dressing nun who is, in fact, a castrato; there are several flashbacks to Lucille and Gwindel’s tortured pasts; and there’s a third-act auction in which noblemen bid for the privilege of watching a young woman be transformed into a zombie. And if those plot twists weren’t enough to hold the reader’s attention, Yuki throws in a few more for good measure: characters double- and triple-cross each other, former enemies unite against a common foe, and zombies swarm a castle, chomping on everyone in sight.

For all the sound and fury, volume three is dramatically inert. Every conversation is overwrought to the point of cartoonishness, draining the truly horrific and sad moments of their visceral power. Worse still, Yuki feels the need to include closed captions for the emotionally impaired, a function she’s assigned to the hapless Eles; when Eles isn’t playing the piano or being held hostage by one of Lucille’s enemies, her primary job is to think about the other characters: “Oh, so that’s why so-and-so has been depressed!” or “They don’t hate each other; they just can’t be together!” And so on.

The artwork, like the script, seems calculated to overwhelm rather than seduce. Yuki is a big proponent of the costume-as-character school of manga writing, substituting epaulets, eye patches, and lace for actual personality traits. As a result, every character, no matter how inconsequential to the story, wears a wackadoo outfit of one sort or another: a habit with a plunging neckline, a clown mask and a cock-eyed top hat. Yuki’s artwork is certainly arresting; her linework is very sensual, and her flair for drawing costumes undeniable, but her desire to populate every scene with elaborately dressed nuns, zombies, and masqueraders comes across as numbing excess in a story that lacks any form of narrative restraint.

I realize that many people will read this review and think I’m a killjoy, that I’ve lost my ability to enjoy a manga for what it is and not what I want it to be. And, to some extent, those readers are right; after five years of grinding out manga reviews, I’m no longer enthusiastic about stories that rely on spectacle to command my attention. But what I find more frustrating about Grand Guignol Orchestra is that there’s nothing real or interesting lurking beneath its busy surface; it’s hysteria masquerading as drama, and the constant stimulation of all-caps dialogue, sudden plot reversals, and Baroque murders becomes its own form of tedium to be endured, rather than something to be savored and enjoyed.