Okay, I’ll admit that when I looked at this week’s new manga, I was quite tempted to name volume two of Kiss Blue, the long-awaited continuation of a lovely little BL story that premiered here back in 2008. And It indeed might have happened, if not for… 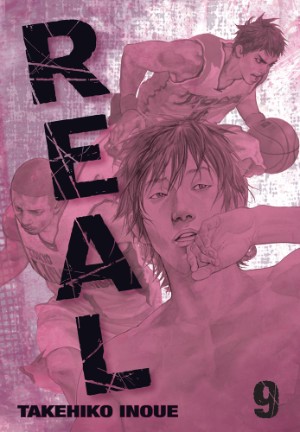 Real. This week brings us the ninth volume of this gritty, moving series about young men in the world of wheelchair basketball. It was repeated recommendations from Manga Curmudgeon David Welsh that compelled me to try this series, and I’ve been grateful for it ever since.

Here’s a glimpse of what I had to say about volume nine in a recent installment of Off the Shelf:

The volume focuses exclusively on Nomiya and Takahashi, each of whom is facing a particularly difficult task. Nomiya, a bumbling high-school dropout who has never really played serious ball, has determined to go pro, and Takahashi, a fierce high-school athlete now paralyzed from the chest down, is struggling to find meaning in a body he can barely pull off the floor.

… Nomiya’s journey, especially… creates the volume’s shonen-like tone, with emotionally escalating scenes driven by a level of brazen determination and raw inspiration that could rival that of any WSJ title. You can almost hear the power rock if you listen hard enough, as Nomiya firmly declares his goals, undeterred by detractors or doubt.

Fortunately, Takahashi’s story provides a nicely ambiguous contrast. The character’s constant need for external comparison–the way he compulsively ranks himself against other rehabilitation patients as though his entire self-worth relies on superiority to others–is pushed front and center, so much so that even he begins to see the impossibility of his system. The realization is subtle, but brutal, and his subsequent struggle to determine even a single, realistic goal for himself is genuinely painful to watch. His story is so compelling, I barely missed the wheelchair basketball, which is saying quite a lot … It’s an uncommonly moving manga, really. I can’t recommend it enough.

And from my review of volumes 5-8:

What’s most impressive about this series … is Inoue’s ability to get inside his characters’ heads and transform their thoughts and feelings into compelling narrative … Yet, through all this, Inoue deftly steers clear of allowing his story become mired in its own weight. Even the series’ heaviest sequences are a true pleasure to read.

Something that seems important to note, and possibly why Real is able to avoid becoming intolerably dark, is that it’s clear from the beginning that Inoue genuinely likes people. Despite the fact that each of his characters has endured terrible heartbreak, pain, and various levels of personal misery (not to mention that most of them have also been responsible for causing significant pain to others), Real is far from cynical. There is no overarching disappointment in humanity here, no deep bitterness, no long-winded speeches about the unavoidable fallibility of the species. Even his characters’ most bitter reflections are directed toward individuals rather than humanity as a whole.

Inoue’s artwork in this series is impressively mature … the world of Real is unpolished and gritty. Inoue’s early expressiveness is even more pronounced in this series, and much more detailed. Also, despite some great dialogue, Inoue lets his artwork do the bulk of the storytelling. Important moments are played out visually, panel-to-panel, without the need for any narration or extraneous dialogue to pick up the slack.

Both heart-wrenching and down-to-earth, this series makes the most of its human drama, both on and off the court, without ever sinking into melodrama. Simply put, Real is real. Highly recommended.

If you haven’t ever picked up this fantastic seinen sports manga, now’s the time to start.