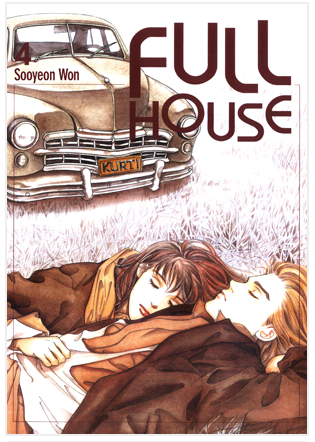 With little to excite me in this week’s comics shipment, and with so many publishers at New York Comic Con turning their focus to digital comics, I’ve decided this week to highlight a manhwa title that can currently be read in English only in digital form. That title is Sooyeon Won’s romantic comedy Full House, available online from NETCOMICS.

Though the Full House‘s early volumes were published by now-defunct Central Park Media, they are obviously now out of print. Thankfully, NETCOMICS rebooted the series from the beginning, providing fresh translations and regular chapter updates at their online store. And though many of us may far prefer to read our comics in print, without the pressure of generating print sales, it seems more likely that NETCOMICS will stick out this 16-volume series over the long haul.

Though NETCOMICS’ updates have been increasingly slow for all their series over the past few months, Full House, at least, is getting some attention from its publisher, with its most recent update just a few weeks old. I’ve reviewed both of the first two volumes here at Manga Bookshelf (one | two) and after my weekend at NYCC, I feel quite inspired to dig into later chapters, so look for more on this series (and others) over the next few weeks.

Here’s an excerpt from my review of the series’ second volume:

So head on over to NETCOMICS and check out the series’ first chapter for free!