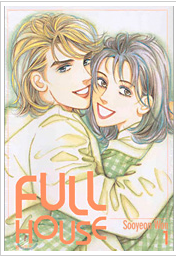 Ellie is a young, independently-minded, Oxford educated screenwriter living in London, far from her native Korea, on an estate called Full House, left for her by her recently deceased father. Having given up on romance with her childhood friend Felix, who became frustrated with her lack of interest in a physical relationship, Ellie is content to live the life of a single career woman in the house she so loves. Her happy existence is disrupted, however, when she is evicted from the house by its new owner, scandal-ridden matinee idol, Ryder Baye. Following her eviction, Ellie lingers on a street corner, pondering her future and vowing to complete the screenplay she holds in her hands. A gust of wind blows the pages into the street, and as Ellie struggles to gather them up, her foot is run over by a passing car, the driver of which turns out to be none other than Ryder Baye.

With Ryder already embroiled in scandal, he and his handlers pamper Ellie in the hospital, hoping to keep the accident out of the news. In a burst of anger and desperation, Ellie suggests that Ryder marry her so that she can recover ownership of her home, an idea which–much to her surprise–is pounced upon eagerly by Ryder’s manager, Miranda, who is anxious to prove that Ryder is not gay. Finally agreeing to a false engagement with a guarantee she can return to Full House (which she will share with Ryder, whom she hates), Ellie begins her new life in the public eye, for better or worse.

Though the setup is classic and so far predictable, Full House has a number of things working strongly in its favor. First of all, Sooyeon Won is delightfully wordy, crafting pages of pithy banter between determined enemies Ellie and Ryder as well as long pieces of narration that read more like a novel than a comic. Though this is the same style responsible for the deliciously overwrought melodrama of her well-known boys’ love series, Let Dai, here it reads as stylish romance with a vintage theatrical feel. Ellie’s quick wit and sharp tongue make her an unconventionally appealing heroine, more interested in her career than her appearance or any other traditionally feminine concerns. Ryder is thoroughly enjoyable as her foil, whose only goals are to do his work and carry on his affairs without hassle. That he is especially drawn to the house that Ellie would do anything to keep gives them one piece of common ground, though this romantic comedy is guaranteed to be volatile for a good long time before either of them recognize it.

Another point in this series’ favor is NETCOMICS’ English adaptation, which reads surprisingly well, even capturing a genuinely British feel in the dialogue, something that is helped along significantly by the decorous third-person narration that accompanies much of the volume. Not having read any of the volumes of this series released by its former licensee, Central Park Media, I can’t compare the two, but considering NETCOMICS’ poor early track record with translation, it seems important to mention how nicely they’ve done with this series so far.

Sooyeon Woo’s art, though not as detailed or beautiful to look at as her work on Let Dai, has a light, sketchy feel that complements the breezy tone of the series, aided further by her playful paneling which keeps the pace brisk despite the abundance of dialogue. Both art and dialogue look clean and crisp in NETCOMICS’ online reader, even at its lower-resolution setting, and even the smallest text is readable against the series’ backgrounds, something that can’t be said for Let Dai.

Despite its questionably believable plot and obvious setup, this series has enough spark and energy behind it to easily propel readers into its second volume. Its fast-paced banter and classic romantic comedy feel make Full House an appealing new addition to NETCOMICS’ manhwa catalogue.

Volume one of Full House is available from NETCOMICS online.