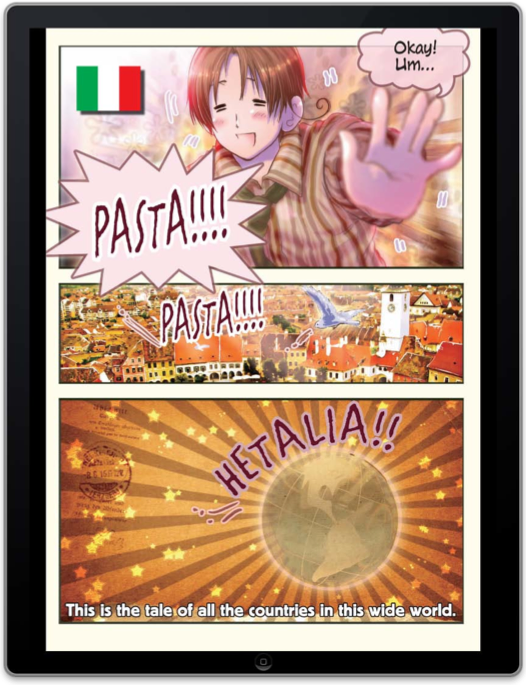 Announced today, manga publisher TOKYOPOP and digital comics publisher comiXology have teamed up to present the first simultaneous print/digital release the industry has yet seen (check out Comics Worth Reading for a little clarification on that claim). The title chosen for this collaboration is Hetalia Axis Powers, a popular Japanese webcomic by Hidekaz Himaruya that has since been adapted to print (as well as anime) in Japan.

This will be the first manga to join comiXology’s catalogue of over 3,000 comics. The series’ first six chapters are already available from comiXology for the web, iPad, iPhone and iPod. The first chapter is free, with subsequent chapters selling for $0.99 each.

Also coming soon, according to a recent press release, is a deluxe teaser app that fans can download from the iTunes App Store, which includes a preview of the first chapter, manga trailer, and photos of elaborately dressed fans in Hetalia cosplay.

Quotes from TOKYOPOP’s Stu Levy and comiXology’s David Steinberger suggest that this is the first in an effort to bring all of TP’s manga titles to comiXology’s digital platform. Other manga publishers who currently provide both print and digital releases of many titles include Digital Manga Publishing and NETCOMICS, and of course Yen Press, whose Yen Plus magazine recently launched its first digital issue. Who will be next?