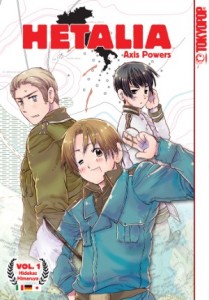 To say that Hetalia: Axis Powers has a devoted fanbase is like saying that Cookie Monster is partial to Oreos; it’s the kind of series that inspires fans to write their own Hetalia stories by the truckload (there are over 14,000 posted at FanFiction.net), dress up as their favorite countries, and debate the virtues of various characters with quasi-religious intensity.

Part of Hetalia‘s appeal lies with the artwork: manga-ka Hidekaz Himeyura populates his stories with cute, attractive young men in lavishly detailed military costumes that are tailor-made for cosplay. The other part of Hetalia‘s appeal lies with its cheerfully subversive premise: all the major participants in World War II are represented as petulant bishies whose behavior mimics the way these countries interacted in the 1930s, and whose personalities conform to well-rehearsed national stereotypes. Whether or not you cotton to Hetalia will depend largely on whether you find the underlying concept a stellar example of the Japanese ability to kawaii-ify anything or proof that Japan’s younger generation doesn’t grasp just how terrible World War II really was.

I fall somewhere in the middle of the continuum: I’m not offended by Hetalia, but I’m not amused, either. Himaruya has certainly done his homework, seeding the dialogue with salacious historical tidbits and inserting flashbacks to major European wars of the eighteenth and nineteenth centuries, yet he never challenges the basic stereotypes that guide all the characterizations: Japan is prissy and horrified by European cuisine, England views America as his ill-behaved offspring, America loves hamburgers and talks with his mouth full, Germany is efficient and belligerent, and Northern Italy adores pasta and shirks responsibility. The endless stream of nationality-as-destiny jokes grows tiresome quickly; imagine spending an afternoon with someone who insists on referring to the French as “cheese-eating surrender monkeys” every time you mention a recent trip to Paris, and you have some idea of how stale the better gags become on their third or tenth repetition.

From time to time, Himaruya inserts the kind of pointed, tasteless joke that suggests at true subversion. In one scene, for example, Germany finds himself at a supermarket check-out, fuming because Korea is holding up the line, demanding reparations and an apology for how he’s been treated. A more skilled writer could have done something with this moment, perhaps using it as a jumping off point for exploring the complicated relationship between Japan and Korea. Instead, Himaruya treats this moment as just another wacky example of a country behaving according to national character, as if Korea’s legitimate protests over Japanese occupation were akin to Italians loving red wine or Russians placing ineffectual curses on their enemies. I’m mildly horrified to contemplate how Himaruya will treat German anti-Semitism — a personal quirk?

Which brings me to my biggest criticism of Hetalia: Axis Powers: there’s a strong whiff of pointlessness about the whole enterprise. Himaruya goes to great pains to get the history right, but it’s never clear what the series’ underlying message really is; why depict one of the ugliest, most brutal periods in human history as a cute, interpersonal drama if you’re not trying to make some greater point about the folly of international alliances, or the dangers of aggressive nationalism? I have no doubt that Trey Parker and Matt Stone could run with the Hetalia premise and turn it into something genuinely funny, rude, and intelligent, but Himaruya just doesn’t have the historical insight or the courage to do much with the material except make all the participants look very pretty.

Review copy provided by Tokyopop. Volume one of Hetalia: Axis Powers will be released on September 21, 2010.