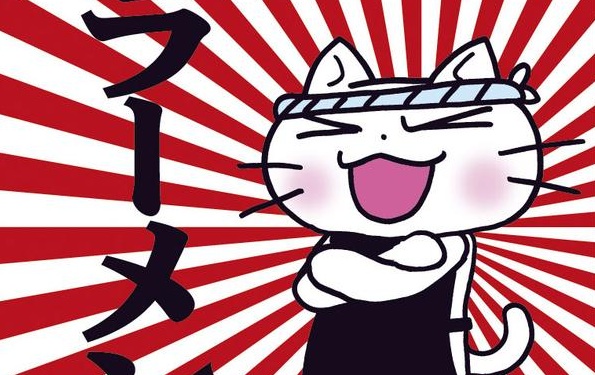 If you’ve ever lived with a cat or dog, you know that no meal is complete without a pet hair garnish. Now imagine that your beloved companion actually prepared your meals instead of watching you eat them: what sort of unimaginable horrors might you encounter beyond the stray hair? That’s the starting point for Neko Ramen, a 4-koma manga about a cat whose big dream is to run a noodle shop, but author Kenji Sonishi quickly moves past hair balls and litter box jokes to mine a richer vein of humor, poking fun at his cat cook’s delusions of entrepreneurial grandeur.

Taisho is forever dreaming up ways to expand his business, ideas that seem sound in the abstract, but prove disastrous in the execution: a dessert ramen consisting of noodles and milk, a delivery service that’s thwarted by feline territoriality, a playing card promotion featuring unappetizing pictures of soup. In fact, Taisho is so completely misguided that he doesn’t grasp what’s novel about Neko Ramen; when a competitor in a cat costume opens a shop, hoping to capitalize on Taisho’s appearance on “The World’s Most Amazing Animals,” Taisho thinks he, too, needs an animal costume in order to drum up business. His sole customer, the long-suffering Tanaka-san, tries hard to offer sensible advice, but Tanaka’s counsel falls on deaf ears. (Why Tanaka sticks around for ramen that he freely admits is “awful” is one the series’ great mysteries.)

Sonishi’s artwork is crude and sketchy; each character is rendered with just enough lines to give a general impression of who or what he’s supposed to be. The primitive quality of the art actually works in the series’ favor, conveying the low-rent nature of Taisho’s business. More effective still is Sonishi’s strategy for differentiating Taisho from the other cats who regularly appear in the series: Taisho resembles a maneki neko (beckoning cat statue) in an apron, while other felines are depicted as simple, rounded shapes with ears and tails.

None of this would work if the translation were stiff or colorless, but TOKYOPOP wisely employed the husband-and-wife team of Emily Gordon and Kumail Nanjiani to adapt the script for English-speaking audiences. Both are experienced writers and performers (she wrote for Bust and Jane, he does stand-up comedy), and their ear for language is evident throughout volume one; the dialogue is idiomatic and the punchlines are snappy. The other secret to the script’s success is the care with which the adaptors distinguish Taisho’s voice from Tanaka’s, infusing the characters’ owner-customer banter the feeling of a good manzai routine, with Taisho as the boke and Tanaka as the tsukkomi.

The biggest surprise about Neko Ramen is that Sonishi manages to wring so many laughs out of what could be a one-joke premise. Sonishi’s gags remain fresh throughout the first volume, thanks, in part, to several interludes in which he abandons the 4-koma format to relate stories of Taisho’s past: his ill-fated stint as a cat model, his rivalry with a noodle shop staffed by a dog, a monkey, and a bird. These interludes nicely set the table for volume two, providing Sonishi more avenues for his absurd humor without straying too far from the series’ basic idea. Highly recommended, whether or not you fancy cats.