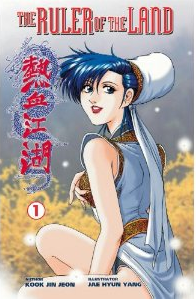 And from the industry side, later in the week, JoongAng Daily (the English-language version of Korean newspaper JoongAng Ilbo) published this article by Sung So-young, naming illegal downloads as a major culprit in the decline of manhwa sales in South Korea while film and television based on manhwa properties thrive.

The article also discusses the improbability of making a living as a manhwa artist, quoting Yang Jae-hyun, author of the popular series The Ruler of the Land (briefly licensed by now-defunct ADV Manga), “I have about three comic books published a year and each volume sells about 4,000 copies. But I earn about 2 million won [$1,818] per month.”

I’ve already had my say about scanlations, so I won’t bore you all with more, except perhaps to point out that in my daily Google alerts for the term “manhwa,” at least 90% of the links included (often more) each day lead to discussions/reviews of scanlated manhwa, including numerous series that are currently licensed by English-language publishers like Yen Press and NETCOMICS. 90%.

Reviews are sparse this week, probably partially due to recent blogger focus on DC Comics’ shutdown of manga imprint, CMX. Still Tiamat’s Disciple found a moment to review volume two of One Fine Day (Yen Press) and Zoey at Manga Jouhou took a look at volume one of Sarasah (Yen Press).