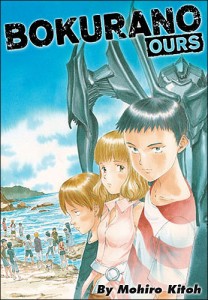 Among the most discussed scenes in the new Kick-Ass film is one that pits a tweenage assassin against a roomful of grown men. To the strains of The Banana Splits theme song, thirteen-year-old Hit Girl dispatches a dozen gangsters with a gory zest that has divided critics into two camps: those, like Richard Corliss, who found the scene shocking yet exhilarating, a purposeful, subversive commentary on superhero violence, and those, like Roger Ebert, who found it morally reprehensible, a kind of kiddie porn that exploits the character’s age for cheap thrills. What’s at issue here is not children’s capacity for violence; anyone who’s run the gauntlet of a junior high cafeteria or cranked out an essay on Lord of the Flies is painfully aware that kids can be beastly when the grown-ups aren’t looking. The real issue is that Hit Girl seems to be enjoying herself, raising the far more uncomfortable question of how children understand and wield power.

Mohiro Kitoh, creator of Shadow Star and Bokurano: Ours, likes to muck around in this uncomfortable space. In Shadow Star, for example, Kitoh pairs teens with powerful supernatural allies — in this case, “shadow dragons” — who become instruments not for fighting evil but for exacting revenge on their masters’ peers and asserting their masters’ primacy in the school pecking order. Shadow Star‘s graphic violence and sex scenes clearly made some folks uneasy, as a few of the later chapters were censored here in the US. (Dark Horse dropped the series before completing it.) Bokurano: Ours hasn’t crossed that line — at least not yet — but once again finds Kitoh subverting a familiar manga trope to suggest the darkness of the underage psyche. This time, he takes a stock shonen formula — kids piloting giant robots to save Earth from aliens — and gives it a nasty twist: the pilot of a successful sortie dies after completing his mission.

The first volume of Bokurano: Ours is neatly divided into three acts, the first explaining how Kokopelli, a mysterious computer programmer, dupes fifteen kids into “playing” this lethal game; the second profiling Waku, a brash jock who pilots the first mission; and third profiling Kodama, a ruthless loner who leads the second. In just a handful of pages, Kitoh establishes both boys’ personal histories and personalities with efficiency and nuance. Waku, for example, views his mission in the same light as a soccer match, as something to be won, while Kodama views his sortie with calculated detachment: by stomping flat an entire neighborhood, he hopes to create work for his father’s construction business. (He’s a youthful Donald Trump, minus the comb-over.)

As these first two sorties suggest, Kitoh seems intent on laying bare the unspoken truth about the giant-robot genre, that kids’ power fantasies are seldom as heroic and self-abnegating as we’d like to think; given the opportunity to control an enormous, destructive piece of machinery, many kids would just as soon turn it on others as save the day. His point is well-taken, but is driven home with such grim determination that it feels more punitive than insightful. The same could be said for his fight scenes, in which he meticulously documents the destructive effects of the children’s behavior. Kitoh’s robots look more like flesh-and-blood creatures than machines, making every body blow and puncture as viscerally real as a wound. The fights aren’t exciting; they’re exhausting, grim spectacles with terrible consequences for everyone caught in the crossfire.

Which brings me back to Kick-Ass: if a story’s tone is serious and dour, rather than cheeky and excessive, how are we to process the sight of young children committing terrible acts of violence? I wouldn’t go as far as Ebert and pronounce Bokurano: Ours morally reprehensible, as I think Kitoh recognizes that a child’s capacity for inflicting — and enjoying the sight of — pain comes from a different place than an adult’s, something that’s less self-evident in the Kick-Ass movie. At the same time, however, there’s something undeniably exploitative about Kitoh’s fondness for depicting children in peril; he seems to take pleasure in stomping all over the idea that children are more innocent and pure than adults, even though he’s devised an unfair scenario for testing that hypothesis. (As I note above, the kids are tricked into “playing” what they believe is a game, with no way to renege on their contract.) I’m not sure if his aim is to shock or simply tell unpleasant truths, but either way, his relentlessly pessimistic view of human nature wears thin fast.