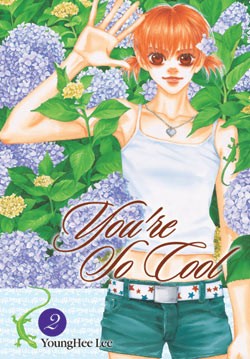 Welcome to another Manhwa Monday! It’s been a quiet week for manhwa, with just a couple of series stealing most of the focus from reviewers.

I’ll lead off with a review of my own, featuring YoungHee Lee’s You’re So Cool, complete in six volumes from Yen Press. This review is also my first guest spot at Brigid Alverson’s MangaBlog, which is quite an honor for me.

You’re So Cool is a series that benefits greatly from being read straight-through, particularly in its first half. Though its heroine is spunky and adorable from the start, the romantic premise is so problematic, it would be easy to abandon just two volumes in. “Fortunately, midway through the series’ third volume, Lee forgets that she’s writing a hopelessly clichéd, emotionally-backwards romance and gets caught up in the real heart of the story: how people (especially families) shape each other, for better or worse.”

Overall, this series was a pleasure to read, though I would never have said that early on. Check out my review to find out why.

In news this week, Bob Strauss at the Pasadena Star-News talks to NETCOMICS’ VP Soyoung Jung about her vision for a new era of manhwa-based film. Also, at Kuriousity, Lissa Pattillo discusses comics about people who make comics, including a couple of manhwa titles from Yen Press, Comic and Croquis Pop. I’d also throw Hissing into the mix.

On to reviews! I’m not the only one talking about You’re So Cool this week, as Connie checks out the series’ final volume at Slightly Biased Manga. Meanwhile, Black God (Yen Press) gets quite a bit of coverage as well, with reviews from Manga Jouhou’s Eric Robinson (volumes four and five) and The Graphic Novel Reporter’s Courtney Craft (volume seven). Lastly, back at Kuriousity, Andre reviews volume two of Raiders (Yen Press).