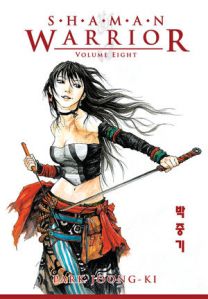 Happy December, manhwa readers! Today’s featured review comes from Clive Owen at Animanga Nation, for volume eight of Park Joong-Ki’s Shaman Warrior from Dark Horse. After coming in late to the series, Mr. Owen has become a big fan, though now he laments the fact that the series’ final volume is nearly upon us. I have to admit that his review has gotten me excited about reading the series myself. Check out this quote: “It’s good to see that after eight volumes the series manages to keep up the same action-packed momentum … Park Joong-Ki not only knows how to tell a story but also develop the characters enough that you’ll actually care about them. On top of that there’s the gorgeous art that makes the fights look absolutely stunning.” Sounds like a winner to me! Read the full review for more!

Before I get to the rest of this week’s reviews, let me draw your attention to this recent announcement from Yen Press about their plans for a graphic novel adaptation of Cecily von Ziegesar’s Gossip Girl. No, it’s not manhwa, but the artist who will be writing/drawing this original story set in the universe of the series is HyeKyung Baek, author of Bring it On!, among others. Thanks, Yen Press!

In other news last week, Concept Central posted a profile on manhwa artist Hyung Tae-Kim filled with illustrations (not necessarily SFW) as well as some insight into his style. Though Hyung Tae-Kim’s contribution to manhwa (from what I can glean) seems to have been primarily cover art, it’s definitely worth a look.

On to the reviews!

Elsewhere, J.R. West at Little Bit of Nothing checks out Tokyopop’s series, Ark Angels, Lori Henderson reviews the first two volumes of Sarasah (Yen Press) over at Comics Village, Megan Moore looks at volume four of Bride of the Water God (Dark Horse) in her LiveJournal, and Joy Kim reviews volume nine of The Antique Gift Shop (Yen Press) at Manga Life. I’ve two other LiveJournal finds to offer here as well–a review of One Fine Day (Yen Press, currently running in Yen Plus) from lavericknine and Jack Frost volume two from cornerofmadness at the community 50bookchallenge.

From the overachievers, Tiamat’s Disciple is is still going strong reviewing recent volumes of several Yen Press titles, Jack Frost (2), Time and Again (1), Comic (8), and Moon Boy (7). Lissa Patillo at Kuriousity reviews both volume 6 of Legend and volume 5 of You’re So Cool, both also from Yen Press. Finally, Julie at Manga Maniac Cafe looks at volume four of Shaman Warrior and volume one of Time and Again.