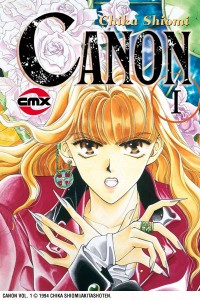 The eponymous heroine of Canon is a smart, tough-talking vigilante who’s saving the world, one vampire at a time. For most of her life, Canon was a sickly but otherwise unremarkable human — that is, until a nosferatu decided to make Lunchables™ of her high school class. Canon, the sole survivor of the attack, was transformed into a vampire whose blood has an amazing property: it can restore other victims to their former human selves. She’s determined to rescue as many human-vampire converts as she can, prowling the streets of Tokyo in search of others like her. She’s also resolved to find and kill Rod, the handsome blonde vampire whom she believes murdered her friends. Joining her are two vampires with agendas of their own: Fuui, a talking crow who’s always scavenging for blood, and Sakaki, a half-vamp who harbors an even deeper grudge against Rod for killing his family.

By the middle of volume two, however, nothing is quite how it initially seemed. Canon finds herself embroiled in an all-out war between full-blooded vampires and half-breeds like Sakaki (he had a human mother and vampire father), as well as an internal power struggle among the undead’s elite. Though she’s drawn to Sakaki — he’s handsome in a broad-shouldered, Seishiro Sakurazawa kind of way — she questions his truthfulness: was Rod really responsible for slaughtering her friends, or does Sakaki know more than he’s telling?

Much as I like the character designs — so X/1999! — the butt-kicking heroine — so feisty and independent! — and the abundant eye candy — so many handsome vamps! — I have two reservations about Canon. First, Fuui is more of creaky plot device than a sidekick, interrupting moments of playful banter with large, undigested chunks of vampire lore. To some extent, such passages are unavoidable in a short series with a complicated mythology, but Shiomi doesn’t integrate them gracefully — too often, these conversations have the feeling of a classroom lecture, i.e. Hemophagic Monsters 101.

Second, Shiomi has no idea how to bring things to a satisfactory close. The final volume should have been the dramatic culmination of the double-crosses, confessions, and new alliances forged in volumes two and three. Instead, it left me feeling confused and cheated — confused, because most of the finale’s hundred pages were devoted to a battle fought by characters who looked so much alike I couldn’t distinguish the bad guy (Glenn) from the good (Sakaki), and cheated, because Shiomi wouldn’t commit to a tragic ending for her angsty tale of vampire love, resorting to a third-act resurrection scene that sapped the story’s tension.

What redeems volume four — and reminds me why I like Chika Shiomi so much — are the two bonus stories. The first, “Tatsumi,” is billed as a “Canon side story,” and explores the relationship between Sakaki and the half-vampire who rescued him from his parents’ executioners, while the second, “From the City of Sin,” is a stand-alone story about a college student who begins to suspect that her parents’ new lodger is, in fact, a murderer. Both showcase what Shiomi does best: create flawed but appealing characters that audiences will root for. And if they look like refugees from a Duran Duran video, so much the better. I hear shoulder pads are staging a comeback this fall.