It’s my fortieth birthday today, and as I was pondering what I’d like to post, I decided that there is nothing closer to my heart on a day like this than my distant past, which brings me to a series that feels more authentic to my teenage heart than anything I’ve read in a long time.

We Were There, Vol. 2
By Yuki Obata
Published by Viz Media 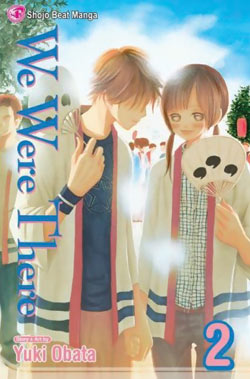 “Beloved. For the first time I understood what that word truly meant in the winter of my 15th year.”

There are two particularly striking things about this volume, and I’ll begin with the one that is most enjoyable. Yuki Obata’s skill at transposing first love to the printed page is truly remarkable. The scene in which Nana and Yano kiss for the first time is so perfectly written, it’s almost impossible to express my delight. This is one of those moments that has been described and over-described by virtually every storyteller on earth at some point or another, yet I can’t say I’ve ever seen it written more effectively than it is in We Were There. Obata’s use of panel layouts and closeups are spot on, leaving the reader just as breathless inside that inexplicable vacuum of the first kiss as Nana is–the fragility of that moment, the quiet electricity as it finally happens–every second of it is exactly right. Even the fireworks in the background feel completely authentic and not at all contrived. This extends into the next chapter, where Nana reflects on her feelings about the night and the excitement and terror of the next day. The boy she likes has kissed her, “… and the color of the world around me has suddenly changed,” she says as she watches his figure retreat into the distance.

The second thing that struck me especially in this volume is a lot less fun, but not for lack of good writing–in fact it’s quite the opposite. Because Obata has made me care for these two characters so much, it is honestly painful to watch them setting themselves up for failure from the get-go. Not that they can help it, of course. It is understandable, considering Yano’s previous experience, that he would feel the need to extract impossible promises from Nana. “Promise you’ll never leave me,” he says, throwing the weight of all his hurt and loneliness on poor Nana’s shoulders–a weight she can’t possibly bear at this young age, or perhaps ever. After all, abandonment can be perceived in so many places and in so many ways. I can’t help but believe that she’s doomed from the start. As painful as this is, it is also brilliantly in-character, and I have to appreciate that kind of honest writing.

There is a wonderful, faint foreboding in the air–a thin fog barely visible against the bright blush of first love, and it’s all so delicately put into place in this volume, the result is simply stunning. As in the story’s first volume, there is nothing melodramatic or overdone and the characters are written with such truth and subtlety, they really stand out as special in the genre. This is the kind of comic that is easy to recommend both to long-time fans of shojo manga and to those encountering it for the first time. I’d like to think that if We Were There had been sitting on the YA shelf of my library when I was a young teen, it wouldn’t have taken me until my late thirties to discover comics. It’s that good.

Read my review of volume one here.