Here’s another quick review for you all. Apparently I’m on a roll!

We Were There, Vol. 1
By Yuki Obata
Published by Viz Media 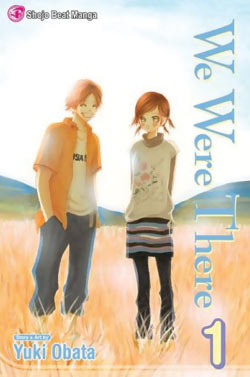 What’s nice about this manga is its simplicity and quiet honesty. Despite the fact that there is obviously an attachment growing between Nana and Yano, there is no melodramatic romance anywhere to be found. Their relationship forms slowly and naturally through a series of moments–some sweet, some awkward–without any contrived plot devices or conniving fan clubs needed to heighten the stakes. The characters’ greatest obstacles are themselves, just like in real life.

To achieve this, We Were There takes popular manga stereotypes and turns them into real people. In place of the clumsy, helpless shojo heroine, we have Nana, who is exactly as awkward as any average girl entering a new school, no more, no less. She makes a few blunders but the worst of these is forgetting another girl’s name, which like most things is quickly forgotten. She confesses to her crush, but though it’s a moderately embarrassing situation, she is certainly not devastated by the outcome. In place of the brooding, dangerous love interest (or its inverse–the shining, popular prince), we have Yano, who is often thoughtless, occasionally kind, and though he is definitely hiding some real pain behind his carefree image, is mostly just confused about his feelings, much like most teenaged boys.

This is not to suggest that the story lacks real conflict or plot. There is certainly some drama lurking below the surface, particularly concerning Yano’s family life (which we only catch the smallest whiff of in this volume) and his history with his late girlfriend as well as her younger sister who is a classmate of Nana’s. Fortunately, the easygoing pace of the first volume suggests that things will continue to be revealed organically through the interactions between Nana and Yano, with their fragile bond as the focus.

I think what draws me particularly to this book is the characters’ emotional ambiguity, which feels extremely real to me. Yano hesitates over the question of just how much (and in what way) he likes Nana, because he honestly doesn’t know, and he’s been told enough lies in his life to realize that pretending to know just to give Nana the answer she wants isn’t really helpful in the long run. Nana, too, is forced to recognize that her feelings are confused as well, and though she isn’t nearly as comfortable with that as Yano is, she’s made an uneasy truce with it by the end of the volume. It’s possible that my appreciation of this is, at least in part, a reaction to a sea of shojo romances (and boys’ love, oh the boys’ love) in which young teenagers are constantly proclaiming deep, everlasting love for each other which (to be fair) is realistic in its own way. These are certainly years of heightened emotion when everything, including love, feels as extreme as life or death. Still, it’s immensely refreshing to see a regular, confused teenager interacting with another regular, confused teenager, and this somehow manages to be more poignant than a thousand grand declarations of love ever could be.

This series’ weakest point is the art, which is too wispy and vague for my liking and not especially creative. The backgrounds are dull and mostly nonexistent, and the characters’ eyes frequently have an odd, empty look. Despite that, the faces still manage to be expressive which is an impressive feat, I suppose. Also, there is a nice, delicate quality to everything, which matches the feel of the story quite well.

The understated tone of this series may not be for everyone, but for those of us who crave some small moments and emotional nuance, We Were There is an excellent choice.