This is a continuation of the Fullmetal Alchemist re-read I started last weekend. It’s been such a pleasure so far to re-read this series. Hiromu Arakawa’s storytelling, rich characterization, and humor make for an incredibly compelling reading experience. I have said before that if I could ever create something that made another reader feel the way I do when I’m reading Fullmetal Alchemist, I would consider that the greatest accomplishment of my life. That statement holds up on the second read. 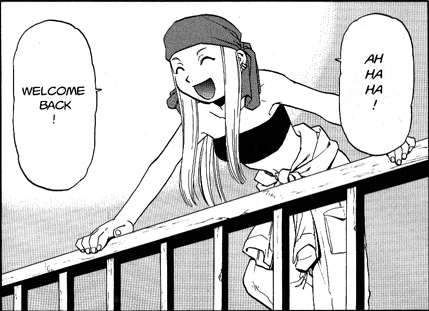 Volume 3 is the volume that truly hooked me on this universe. The volume starts off really nicely, with Ed and Al returning to Resembool for much-needed repair, and I tend to love anything that takes place there, because I love Winry and Granny Pinako (and their dog, actually, I love that the automail mechanics have a three-legged, auto-mailed dog), and also because we always get a little more backstory whenever they return there. Also, in this volume, we’re introduced to Second Lieutenant Maria Ross, who is one of my favorite characters in the series. 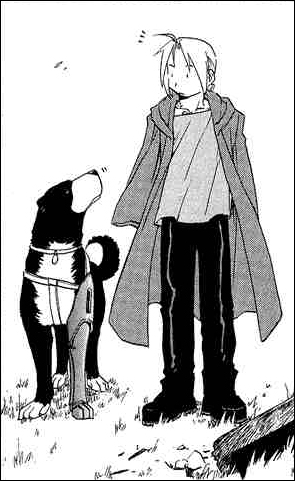 The volume ends well, too, with my favorite kind of fight. Unlike the strange, tournament-style showdown in Volume 2, this volume brings in the fighting the way I’ve come to love it in this series. The action is enough to satisfy any fan of shounen manga, but the plot and characterization involved are engrossing for old ladies like me, too. Both Ed’s and Al’s fights here are poignant and rich with emotional conflict, and really contribute to the story, rather than putting it on pause, as in so many lesser works.

The real gem here, though, is the middle of the book, with the Elric brothers’ horrifying discovery of the secret behind the philosopher’s stone. It was then that I knew this story meant business. I should have realized, perhaps, during the Nina & Alexander arc, that the story was going to be steeped in darkness and constant moral conflict, but it didn’t truly hit me until I reached this volume. Everything here is so wonderfully complex, and certainly dark, but the humor ensures that it never becomes tiresome or melodramatic. All the characters are so richly drawn, even those who could be simply ridiculous, like sparkly Major Armstrong, and spacey bookworm Sheska. What a wonderful series. 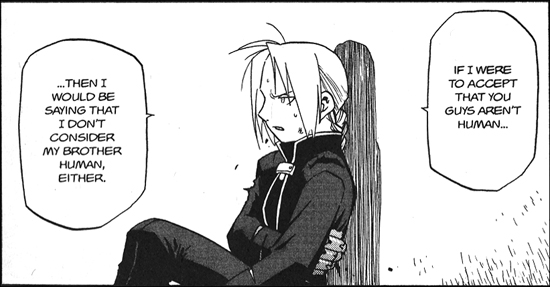 You’d think I’d have more to say about the volume that really hooked me, but you know, I think this volume really speaks for itself. It doesn’t need me to go through it, point by point. If you’ve read it, I’m sure you understand.

I almost feel embarrassed about what I have to say from this point on, because at this point, I no longer have any criticism to offer, and probably all of these entries are destined to be filled with unabashed squee. Volume 4 begins in turmoil, with Ed and Al in the end of the fights they began in the previous chapter. Ed is physically battered, and Al is an emotional wreck. Everyone barely escapes the destruction of the old lab, with the exception of Ed’s foes, who are destroyed by much worse foes. There is so much to love about this volume, and one of my favorite moments comes early on, when the soldiers tasked with protecting the Elrics apologize in advance for their insubordination in chastising him for putting himself in danger. Oh, these characters! They are just written so well. 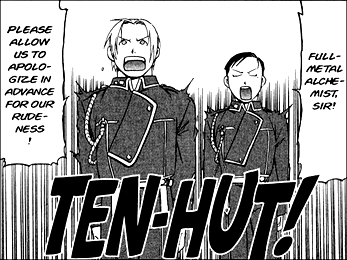 Winry’s appearance in this volume is wonderful, both with the Elric brothers, and as she visits Lt. Colonel Hughes’ family. Which of course brings me to the most heartbreaking piece of this volume. I am not sure I will ever recover from the murder of Lt. Colonel Hughes. If my feelings about the mysterious characters of Lust, Envy, and Gluttony were at all in doubt before this, and I think they were a bit, they became absolutely decided after Hughes’ death. Never has an author instilled so much feeling in me for a character I’d just barely met. His murder was unforgivable. Watching his funeral in juxtaposition with Ed, Al, and Winry happily chatting on the train, made me cry like a baby. Actually, it’s hard for me to read any of the earlier happy scenes now without tears in my eyes. And Roy Mustang standing at his grave? *snif*

Again, this is a chapter I feel like I should have more to say about, but everything sort of gets overwhelmed by Hughes’ death. I do love, though, all the interaction between Ed, Al, and Winry in this volume, especially concerning the paranoia instilled in Al by Barry the Chopper. Also, I should mention that this volume has one of my favorite side stories ever, “Dog of the Military?” A much-needed healing balm after the tragedy in this volume. 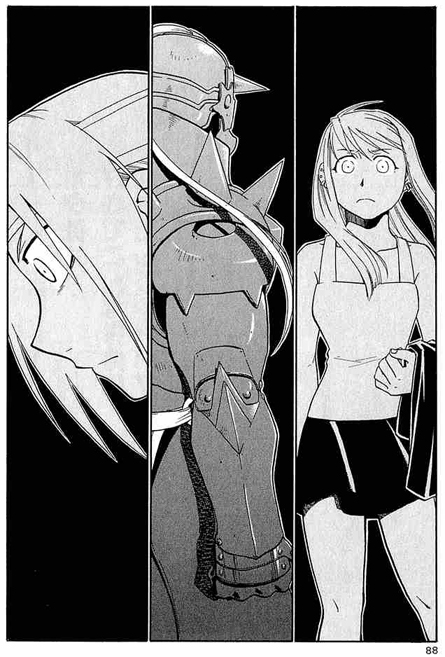