I’ve started re-reading Fullmetal Alchemist from the beginning, mainly to pass the time until the next volume is released by Viz, and I’ve been posting my thoughts about it as kind of a read-a-long with others in a non-public place. I thought I’d try adding these posts here as well, to be publicly accessible. If anyone else wants to join me in re-reading, that’s great, or if you might start the series for the first time and read along, I’d be completely thrilled!

And so, on to discussion of Fullmetal Alchemist, Volumes 1 & 2!

This is my first time going back to the beginning of this series, and I’m reminded now that I actually had a bit of a difficult time getting into it when I first picked up this volume. I hadn’t read much manga at the time. My first had been Hikaru no Go, and I loved that so much, I spent several weeks afterwards going through other shounen competitive/sports-type manga, searching for something I could love as much, and being horribly disappointed by everything else I read. I picked up volume 1 of FMA a bit out of desperation, and immediately felt lost. The thing that kept me going, though, and got me through the first volume, and then on to the second and third volumes (at which point I was a goner), was that as lost as I felt, I also immediately fell in love with Ed, and re-reading this volume, I’m reminded so much of why.

Ed is, from the very beginning, well, Ed. Brash and arrogant, and so excitable about his size, he won me over immediately. I loved his fury, and his complete disregard for authority, and I suppose his outright dismissal of religion didn’t hurt either. I was confused by the universe, and even more by the timeline, but Ed made sense to me right away. I’ll go into raptures about Al later on, but in this first volume, it was Ed that really carried me through.

I do think the storyline feels a little fractured in this first volume. We’re being brought in quite abruptly, without any real exposition, which I generally really like, but I admit I had difficulty keeping up at first. Obviously that is no longer true, so I’m not sure how differently it might have read if I’d been a more seasoned manga reader at that point.

The first two chapters flow pretty well, and even provide a little bit of backstory, which is helpful. I really like this Church of Leto/Father Cornello section, and I was glad when the anime began the same way. I think it tells us a lot really efficiently, both about the characters and the universe, especially concerning the nature of alchemy. My confusion really began going into the next couple of stories, because it felt really episodic, and I started losing my grasp on the overall story. By the time I got to the train story at the end of the volume, I wasn’t sure what was going on, and the introduction of Roy Mustang felt really out-of-the-blue. I’m being overly critical of all this right now, because as I get into the later volumes, all criticism will disappear, and this will become pages and pages of rapturous squee, so I figure I might as well criticize while I can. Heh.

One of the things that is brought into the story right away that I like a lot, is the fact that while Ed is supposedly “a dog of the military,” he seems to have no loyalty to it at all. We don’t really know why, as we’ve had very little backstory at this point, but we’re made aware of it right away. What is even more curious, and not yet clear, is what he does stand for. We find out right away that the reason he and Al are traveling is to find the philosopher’s stone so that they can regain their original bodies, but Ed’s natural dislike of authority (and especially abuse of authority), causes him to take up these small fights for the good of the people in many places he visits. It isn’t made clear, though, whether he would do any of these things if the authorities weren’t actually in his way. I like that ambiguity, despite the fact that of course I want him to want to help people. I also like the fact that he really doesn’t care much about the law, even though he’s supposed to be in a position to enforce it.

Heh, I remember now how I wasn’t actually sure that the author was joking when it said at the end of the volume that the series would be switching protagonists in the next volume, making Roy Mustang the lead character. But if I had any doubts about Hiromu Arakawa’s sense of humor, they were completely washed away by the next page. 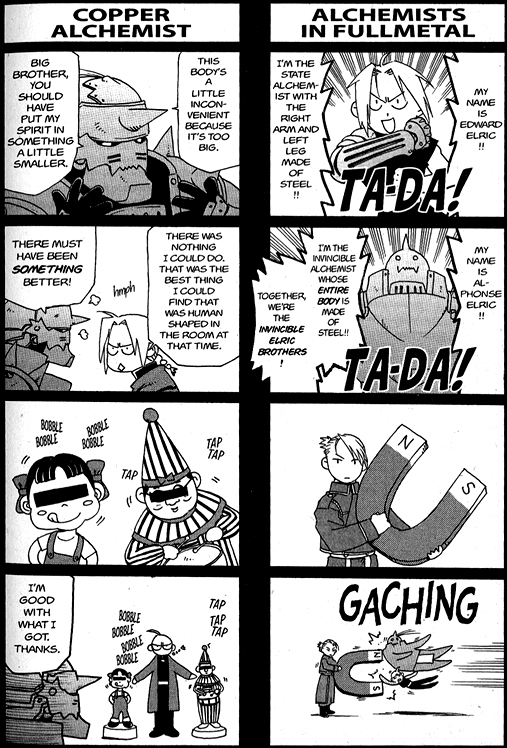 This volume starts on a very strong note, I think. It’s the Nina & Alexander story that helped me get pulled into this series for reasons other than simply liking Ed. What Mr. Tucker does (and has done) is unthinkable, and yet here it is, and he’s telling Ed that they are not so different, which is both true and not true at all, and I found all of that incredibly compelling. Oh, the pain of it all! I had the same reaction on the second read as I’d had on the first. I felt like Ed. I seriously could not get over what happened to Nina and Alexander (and years before to Nina’s mother). It twisted my heart in an unbearable way, and I felt the pain of it long after I’d put down the volume. 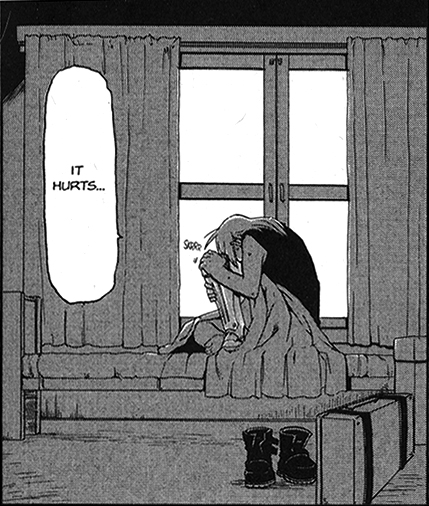 Other wonderful things about this volume, are Ed’s horrible nightmare about his mother, the first real glimpses of Ed and Roy’s fabulously rude relationship, and Hawkeye’s awesome shooting skills and her protectiveness of Roy. We are also given cryptic, ominous information about the “truth that lies within the truth” of the philosopher’s stone, and a little more insight on what’s going on in the larger story of Lust, Gluttony, et al.

Going back to Al a bit, I think this volume really starts to show us how important he is to Ed’s sanity, and that if he wasn’t there to stop Ed from indulging his worst impulses, Ed might be a very different, and truly terrifying person. They are able to survive and to retain their humanity because they are together, and though Ed is the one who keeps them on mission, it is Al, the one who hasn’t been treated as a child since he became a soul in a suit of armor, who guards what is left of their childhood and their innocence. 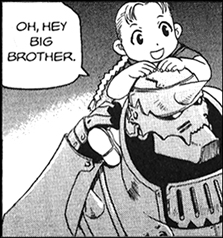 The one thing that weakens this volume, in my opinion, is the clunky standoff between Scar and the various state alchemists. In the middle of what is really a very complex, moving, and thoughtful volume, I felt suddenly like I’d been transported into my Playstation 2, for a special alchemist installment of Tekken Tag Tournament. I thought, also, that some of the backstory about the Ishbalans was presented in a clunky, cop-out way, though at the end of it, just as I’m getting frustrated, it leads into Roy Mustang’s confession about having been one of the state alchemists recruited to wage a campaign of genocide against the Ishbalan people, and I’m reminded of why I’m reading in the first place. I have to think that this strange little foray into tournament-style fighting is due to the conventions of the genre, because it is not usual for this series, which I am really grateful for. I mean, sure, FMA has a lot of fighting in it, but I don’t remember ever feeling jarred out of the story in this way ever again. I guess as I continue my re-read, I’ll find out if that’s really true. :)

Something that is wonderfully apparent in this volume is how beautifully conceived the minor characters are in this series. Each of them is wonderfully idiosyncratic and fully-formed in the author’s mind, and it is obvious as they begin to turn up in the story. I read a complaint recently that there are too many characters in FMA for the average person to keep track of, and I have to respectfully disagree. I think that when a large number of characters is introduced and developed as skillfully as they are here, they become an asset, not a liability. I love FMA’s minor characters, and so does the author, this much is clear.

In any case, this volume went a long way toward getting me hooked on this series, which I think really happened as I read the next volume. 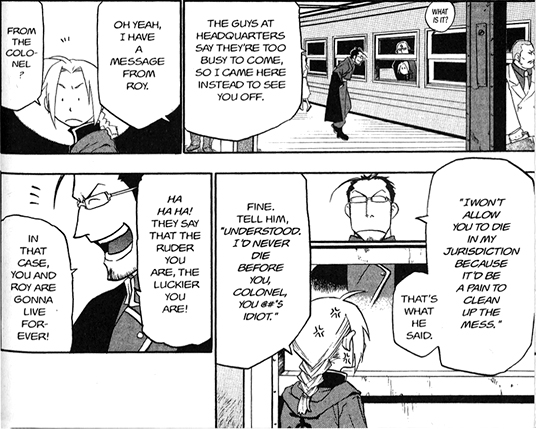