I’m glad that Shojo Beat remains committed to bringing out one mature title at a time, so with An Incurable Case of Love ending, Yakuza Lover rotates in. Yuri is a 20 year old college student who capably fends off the overtures of sketchy men, loudly proclaiming “I want a guy who loves me for me!” Her desire for a boyfriend takes an unconventional turn when she ends up in the wrong party room and needs to defend herself from some criminals through the application of a handy side table and her previous experience as a high school athlete. Local yakuza boss Toshiomi Oya comes in to check up on her and gives her his coat as well as his business card, which he says can be used as a shield if she ever finds herself in a similar situation. 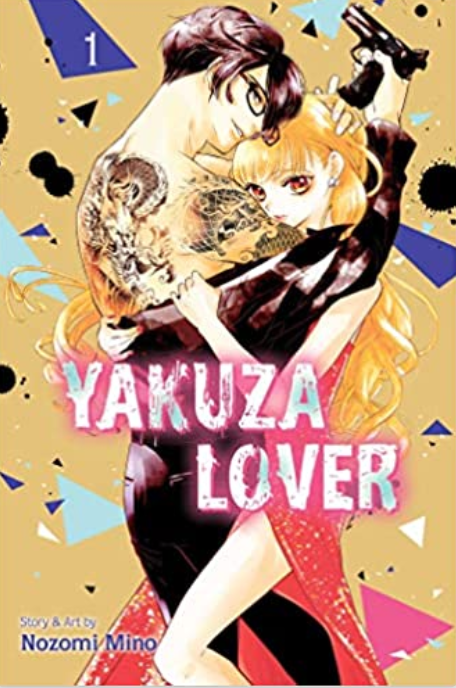 While Oya says farewell, Yuri can’t stop thinking about him and seeks him out to return his coat. Oya promptly confesses his feelings of affection for Yuri and she’s fascinated by him. They start dating, but each time Oya leaves he references his criminal lifestyle, saying “I’ll call you again if I’m still alive.” Like a Mayu Shinjo hero, Oya’s main personality trait is extreme possessiveness. However, he is happy to indulge Yuri’s whims, like dressing up in traditional clothing while playing tourist. Yuri is still trying to find a better part-time job and not all that invested in material things, although it remains to be seen if some of the complications of dating a crime lord are going to test the relationship.

This first volume was over the top and entertaining, and I enjoyed the elements of dark humor like Oya repeatedly referring to the potential of his impending death. As much as I enjoy a good shoujo trope, I do sometimes want to read a series that doesn’t feature school festivals and sports days all the time, and it seems like dodging bullets and dealing with rival crime lords will be plenty entertaining in Yakuza Lover.