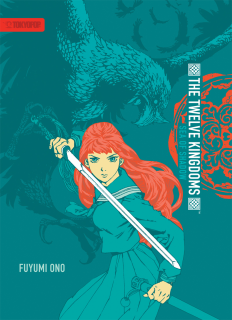 In 1992, The Twelve Kingdoms debuted as a series of fantasy novels written by Fuyumi Ono with illustrations by Akihiro Yamada. The series has inspired an anime adaptation as well as audio dramas and video games. Between 2007 and 2010, Tokyopop released English translations of the first four books in the series (which I have previously read and reviewed): Sea of Shadow, Sea of Wind, The Vast Spread of the Seas, and Skies of Dawn.

Although I had vaguely heard great things about The Twelve Kingdoms, I didn’t actually get around to reading the novels until they had technically gone out of print. I ended up loving them and they are well-worth tracking down. (The hardcover editions were apparently notorious for quality control issues, though, so it’s probably best to stick with the paperback releases when they can be found.) Soon after reading the first volume, Sea of Shadow, I immediately sought out the remaining books as well as the anime adaptation; I wanted all of The Twelve Kingdoms in English that I could get. Directed by Tsuneo Kobayashi, the anime is a forty-five-episode series which originally aired between 2002 and 2003. In North America the anime was licensed by Media Blasters. It, too, is well-worth tracking down.

The Twelve Kingdoms is a fantasy epic with an Asian flair, the worldbuilding drawing particular inspiration from Chinese myths and legends. It’s a story about the rise and fall of kingdoms as well as a person’s role in influencing the world around them, whether for good or for ill. There is action, adventure, magic, politics, combat, court intrigue, and more. The Twelve Kingdoms is broad in its scope, but it can also be very personal with the attention that is devoted to its characters and to their development as individuals. Both the narrative and the characters of The Twelve Kingdoms are layered and complex. The Twelve Kingdoms also stands out from many other fantasy works due to its excellent female characters. They often play a prominent role, whether as a hero or as a villain, and in many cases are the characters who are the focus of and really drive the story. They are every bit as nuanced as any of the other characters in the epic. 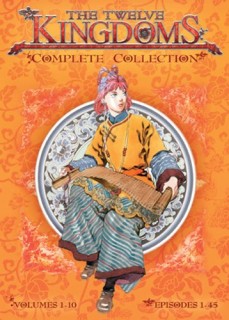 For the most part, The Twelve Kingdoms anime adapts the material covered in the first four books. So, anyone who has read the Tokyopop novels and is looking for more of the The Twelve Kingdoms story in English won’t find much new. However, there are some differences between these two versions of The Twelve Kingdoms. Some changes are inevitable due to the very nature of the new medium in which the story is being expressed—illustrated prose has been transformed into moving images with color and sound—while others are the result of deliberate choices made by the creative teams.

The anime remains faithful to the content and tone original, but it’s also not a strict retelling. Generally, the novels tend to stand on their own as separate books. They are closely related to one another, sharing the same world and even some of the same characters, but the individual stories don’t necessarily directly impact the others in the series. In the anime, the plot is treated as more of an overarching whole and is chronologically more cohesive. As a result, the anime is arguably more successful in making The Twelve Kingdoms feel more like a single, continuing story rather than a series of connected tales. There are still distinct story arcs in the anime, they’re just more closely intertwined and slightly reordered when compared to those of the novels.

One of the most notable differences between the novels and the anime is the introduction of two new characters (Ikuya Asano and Yuka Sugimoto) who play an important role in the first major story arc which largely adapts the first novel. The addition of these characters actually makes a good deal of sense. For the most part, Sea of Shadow follows Youko Nakajima, who becomes one of the most significant characters in The Twelve Kingdoms as a whole. In the first novel she is quite often alone, both literally and figuratively, and so much of the narrative as well as her personal character development are internal. This sort of inwardly-focused storytelling doesn’t always translate well in a more visual medium; the inclusion of the new characters allows the internal development of The Twelve Kingdoms to become more outwardly explicit in the anime. 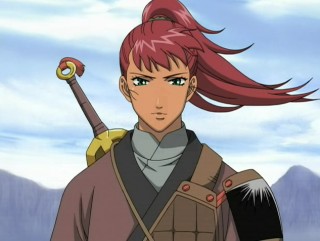 In general, I find Yamada’s illustrations in the novels to be more refined and consistent than the anime’s visuals. (I have been sorely tempted to import Yamada’s The Twelve Kingdoms artbooks; they’re gorgeous.) There are scenes in the anime that are stunning, but there are also scenes where the animation and artwork are simply off. However, it is marvelous to see and be constantly aware of the visual details of the series’ setting and character designs in the anime, something that is more easily missed when reading the books. While the novels often allow a reader to better understand the worldbuilding and the more internalized aspects of The Twelve Kingdoms, overall the anime does provide a better visual context.

The anime also has a wonderful soundtrack, something that I particularly appreciate as a musician. Obviously, a soundtrack is one of the elements that the novels completely lack and is therefore unique to the anime. The music for the anime was composed by Kunihiko Ryo and is a mix of sweeping orchestral pieces and pieces more reminiscent of folk music. As previously mentioned, The Twelve Kingdoms as a whole is in large part inspired by Chinese culture, legends, and mythology. This influence can be heard in the soundtrack as well; Ryo incorporates many traditional Chinese instruments and stylings into the music of The Twelve Kingdoms.

I love The Twelve Kingdoms, both the original novels and the anime adaptation. The Twelve Kingdoms has an interesting setting and exceedingly detailed worldbuilding, well-developed characters with strengths and weaknesses, and a complex story that can be engaging as well as emotionally resonant. Anyone who enjoys a good fantasy tale would do well to experience the epic for themselves, in whichever medium it happens to be that appeals to them most. I wish that more of The Twelve Kingdoms was available in English, but what we do have is great.