I tend to enjoy darker-toned stories about immortals, so I wasn’t particularly surprised that I enjoyed the first volume of Ajin: Demi-Human. The manga series was conceived of by writer Tsuina Miura and artist Gamon Sakurai, but by the second volume it appears as though Sakurai has taken over the story of Ajin as well. (Although, it should be noted that Miura and Sakurai’s pilot chapter for Ajin, “The Shinya Nakamura Incident,” is also included in the series’ second volume.) Ajin: Demi-Human, Volume 2 was originally published in Japan in 2013 while the English-language edition of the manga was released by Vertical at the end of 2014. The first volume of the series established an intriguing premise—immortal beings, considered to be less than human, who are persecuted and subjected to cruel experiments—as well as an exceptionally dark atmosphere, and so I was particularly interested in seeing where Sakurai would take the story next.

Kei is on the run. Recently discovered to be an immortal demi-human—only the third to have been officially confirmed to exist in Japan—he is trying to avoid capture by the Demi-Human Control Commission and hoping to find allies in other immortals. When he is contacted by two rogue demi-humans, Sato (also known as “Hat”) and Tanaka, it seems as though Kei’s hopes have been answered, except for the small matter of the two men having taken his sister hostage. But with a little bit of effort and some unexpected theatrics, Sato is able to readily explain away the kidnapping and even manages to earn Kei’s trust in the process. Though Kei is unaware of it at the time, that misplaced trust will have severe repercussions for him. Sato and Tanaka are very interested in the young man. Not only is he a demi-human, just like the two of them Kei is a variant immortal capable of manifesting and controlling a black ghost. However, it is a power that he has yet to understand or to completely control. 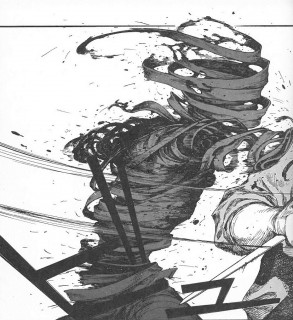 Despite being a large focus of the first two volumes of Ajin and around whom much of the manga’s plot revolves, currently Kei is actually one of the least compelling characters in the series. The people and events surrounding Kei tend to be much more engaging. Sato in particular is a tremendous presence. It is easy to see why he instills such fear among those in the Demi-Human Control Commission—he cannot be controlled. Sato is a coldly calculating and ruthless strategist with extraordinary combat skills and the ability to manipulate both the people around him and the situations in which he finds himself. He is terrifyingly effective in the execution of his plans. At this point only some of those plans have been completely revealed, but it is obvious that Sato is willing to sacrifice anyone in order to accomplish them. In comparison, Kei seems to be incredibly weak-willed and naive, lacking a strong sense of self. Granted, almost anyone would when compared to Sato, but it’s also somewhat understandable since Kei’s entire worldview has been shattered. With his new-found immortality, he is still trying to understand who he is.

Ajin is a very dark and violent manga. The experiments carried out on the demi-humans are brutal and cruel. Generally, the most graphic moments are implied rather than seen, but that makes the torture no less disturbing. Demi-humans, especially those controlling black ghosts, are more than capable of fighting back, though. For example, Sato’s repeated attacks on research facilities associated with the Demi-Human Control Commission and his complete disregard for life are astonishing. Sakurai’s artwork is particularly effective during action sequences, of which there are plenty in the second volume of Ajin. The second volume also addresses some of the social issues surrounding demi-humans, in particular the fact that not everyone feels that demi-humans should be discriminated against just because they happen to be immortal. So far, Sakurai has been able to strike a good balance between the series’ intense action and horror and its exploration of deeper moral and ethical concerns. I’m certainly looking forward to seeing how the series continues to develop.

It was the cover art of Ajin: Demi-Human, Volume 1–a creepy image of disconcerting skeletal figure–that first sparked my interest in the series. When I learned that the manga was at least in part about immortals in addition to being fairly dark in tone, I knew that I wanted to read it. The exploration of immortality and its repercussions in fiction fascinates me. Series like Hiroaki Samura’s Blade of the Immortal and novels like Fumi Nakamura’s Enma the Immortal have actually been some of my favorite works of recent years. And so, I was very curious about Ajin. The first volume, written by Tsuina Miura and illustrated by Gamon Sakurai, was originally released n Japan in 2013. (Later volumes of the series are both written and illustrated by Sakurai.) The English-language edition of Ajin, Volume 1 was published by Vertical in 2014. The production values are particularly nice, with high-quality paper that really shows off Sakurai’s ink-heavy artwork.

Seventeen years ago, the first demi-human was discovered. Immortal, and perhaps something a little more, demi-humans are considered to be less than human–feared, despised, reviled, and subjected to horrific experiments in the name of science and for the advancement of humankind. Demi-humans seem to be rare, only forty-six have so far been identified, but that’s only because they appear to be normal humans, at least until they survive their first death. Most assumed Kei Nagai was an average high schooler, preoccupied with studying for his college entrance exams. But Kei’s hopes and dreams of becoming a successful doctor are shattered when he dies in a traffic accident, his body smashed into pieces. And then he comes back to life. Now he’s on the run, pursued by the general population, the police, the Demi-Human Control Commission, and even other demi-humans. His only ally is his friend Kai, who tries to help him escape, but that simply means that the two of them are in danger instead of Kei alone.

As in many other works about immortality, Ajin shows that living forever isn’t always something to be desired and can in fact bring a tremendous amount of pain and suffering. There’s the physical torment of death and injury in a body that revives again and again, but there’s also the mental and psychological damage to take into consideration as well. Kei has suddenly lost all of his rights as a person, he is being hunted as something not worthy of being human, his family and friends are filled with disgust towards him–of course this is going to have an impact on the young man. It would be exceedingly easy for him to lose his humanity or his sanity. Glimmers of those possibilities can be seen in the first volume of Ajin as Kei struggles to realign his worldview with his newfound reality. Granted, Ajin, Volume 1 largely focuses on the action surrounding Kei’s escape and explaining (not too subtly) the unusual abilities of the demi-humans. Not much character development has happened yet, but the potential is certainly there.

Ajin, Volume 1 is a good start to the series, though there is still room for improvement. In general, the artwork tends to be a little stronger than the writing at this point. The premise is interesting, and promising, but Sakurai’s illustrations are what really give Ajin its effectively dark atmosphere. Particularly chilling are the “black ghosts”–malignant extensions of the self capable of extreme violence which are able to be manifested and controlled by certain demi-humans. (That disconcerting figure from the cover? That’s a black ghost.) Humans are quite capable of shocking violence as well. Several examples of the gruesome experiments that have been conducted using demi-humans as test subjects are shown in Ajin, Volume 1. The methods are tortuous and the repeated deaths are cruel. So far, the only real difference between the two groups is that when bodies are mutilated or torn apart–which is not at all an uncommon occurrence in the first volume of Ajin–for better or for worse the demi-humans actually survive.