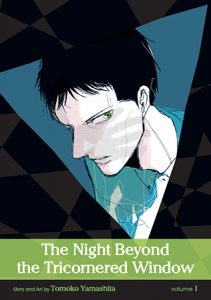 Until Olivia mentioned it over in the comments on Manga Bookshelf, I had no idea this series existed, let alone that it was being released in English! Having loved Yamashita’s Dining Bar Akira and Black-Winged Love, I immediately purchased all extant volumes.

Kosuke Mikado has been able to see spirits since he was a child, but any time he tried to talk to his friends about it, they thought he was weird, so he has been keeping his distance from other people and has begun to doubt his own sanity. When the manager of the bookshop where Mikado works hires Rihito Hiyakawa to deal with a pesky spirit—and after Hikayawa recognizes Mikado’s powers and uses them to boost his own—Mikado finally finds someone who lives in the same world he does. Although he begins the series frightened and clinging to skepticism, through Hiyakawa’s assurances, Mikado gradually accepts the things he sees as reality and begins to combat them independently. 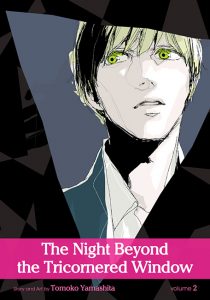 I love series like this, where the leads have episodic disturbances that they investigate (via the partnership they strike up as a sort of supernatural cleaning crew and frequently assisting a non-believing cop named Hanzawa) plus an ongoing mystery (involving curses cast by someone named Erika Hiura) and yet the most important and fascinating aspect is the relationship between the leads themselves. There are the fun, suggestive moments where the guys are combining their powers for one reason or another and end up using dialogue like, “Do you want me to touch it?” or “Take me all the way in.” But where Yamashita-sensei really excels is at teasing out threads of darkness.

We first get an inkling that something is amiss when the guys visit a potentially fraudulent fortune-teller. Mikado is the one who physically sits for the session while Hiyakawa, bodily still in the waiting room, casually inhabits Mikado’s body to see for himself. The fortune-teller warns Mikado that the way Hiyakawa reaches into him so easily is dangerous, a warning neither Mikado nor I take seriously. And yet, after an encounter with Erika Hiura shows Mikado’s vulnerability to being accessed in this way, Hiyakawa makes Mikado enter into a contract he doesn’t remember, and we get this awesomely creepy full-page panel. 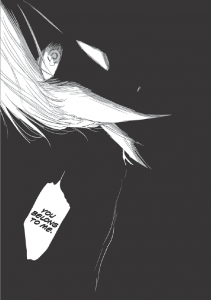 After this point, more and more potentially disturbing things about Hiyakawa are revealed. “I don’t have parents or friends,” he says at one point. Later, he seems baffled by the concepts of beauty and evil. As troubling indications mount, Mikado knows that he should be thinking seriously about what is happening between them. Other characters certainly question it, but Mikado is strangely reluctant. Is it because Hiyakawa is somehow keeping him quiescent, or is Mikado willfully maintaining his ignorance because he does not want to go back to being alone? 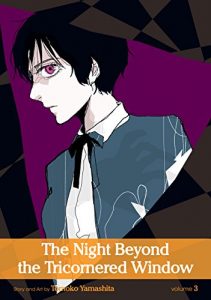 It’s only at the end of volume three, wherein Hiyakawa nonchalantly suggests that it’d be good if they could work the other side of the business, too, that Mikado realizes he has no idea what kind of person he’s working with. As a reader, I too was lulled into believing that of course the protagonist of a series about fighting the supernatural is a good guy. Turns out, he’s more of an empty-inside opportunist. At this point, even I just want to say, “Run away, Mikado! Run away and don’t look back!” Is there any hope that he can help heal and humanize Hiyakawa, or will he only end up destroyed? How soon until volume four comes out?!

Lest my focus on the relationship suggest otherwise, the plot of The Night Beyond the Tricornered Window is also excellent. In fact, I sincerely owe Olivia a debt of gratitude. And SuBLime, too, in fact. I hope print editions are available at some point in the future, because this is a series I need to have on my shelves.

The Night Beyond the Tricornered Window is available on Kindle and at sublimemanga.com. The series is ongoing in Japan, where the fourth volume has just been released.

As in her excellent Dining Bar Akira, Tomoko Yamashita has created in Black-Winged Love a set of boys’ love stories focusing more on a universal aspect of human relationships rather than what goes on between guys in the bedroom. Each story relates in some way to the difficulties of communication, be it the crippling fear that keeps gay men from confessing their orientation or feelings to those they care about or the problem of convincing someone of your sincerity when sexual kinks keep getting in the way. By turns, these seven stories are amusing, disturbing, sexy, and heartbreaking.

My favorite in the amusing category is “It’s My Chocolate,” which is the story of a closeted gay man, Minori, who still lives at home because he feels a responsibility to help look after his many younger siblings. He’s gotten used to self-denial in order to keep the peace at home and feels that coming out to them would be impossible. The dam finally breaks and he blurts out all of his grievances in a heartfelt and thoroughly undignified manner, resulting in a wonderfully low-key response from his mother.

“A Villain’s Teeth” is an extremely interesting story with some disturbing elements, though they thankfully don’t dominate. The tale begins with daughter of a yakuza boss informing his long-time devotee, Yuikawa, that her father is dying of cancer. She’s convinced Yuikawa is in love with her father and encourages him to seize this final opportunity to let him know his feelings. Because of his laid-back demeanor, she can’t quite understand why Yuikawa has chosen the life of a thug, resulting in a marvelous panel in which Yuikawa replies, “Young lady, I am a thug.” His claim is proven a few pages later when he violently deals with an underling who’d thought to involve him in a plot against the ailing boss. It’s rather disconcerting to see graphic violence so casually perpetrated in a BL story, but definitely sets this story apart.

The title story offers the most complicated and fascinating relationship in the volume. “Black-Winged Love” involves a masochist named Futakami who has declared his love to a hot-headed coworker named Nakazu. Knowing Futakami’s special quirk, Nakazu doesn’t take the confession seriously and whenever he gets angry about it, Futakami starts swooning. In another’s hands, this situation might be played for comedy, but Yamashita approaches the problem seriously, getting inside Futakami’s head to show that he genuinely loves Nakazu, but that his fetishes—like a pair of black wings shielding his heart—keep getting in the way. I always love stories in which the obstacle keeping two people apart comes from within, and Futakami’s anguish at his own inability to express what he really feels is positively heartbreaking.

Artistically, Yamashita’s style continues to remind me of est em. Her men all look like men, with no weepy uke types in sight, though a few of them do greatly resemble characters in Dining Bar Akira. Most stories have no sexual content whatsoever, but when such moments do occur, they’re understated and brief. One special feature I really like is the gallery of deleted scenes that appears at the end of the book, including an epilogue of sorts to one of the stories.

The two BL works by Tomoko Yamashita currently available in English are some of the best the genre has to offer. I hope we see more of her other creations—including this josei title—in the near future!

32-year-old Akira Koji doesn’t know how to handle it when Torihara Yasuyuki, a coworker six years his junior, says, “You know… I have feelings for you.” He has always considered himself to be straight and ultimately decides not to take the confession seriously. Still, he can’t help being a bit curious. As he and Torihara continue to interact at work, bickering a good bit yet dancing closer to each other, he becomes more and more intrigued. Eventually, the two begin dating but insecurities rear their heads when it’s time to think about taking their relationship to the next level.

The basic plot of Dining Bar Akira isn’t anything new, but what Tomoko Yamashita does with the characters is fascinating. Both Akira and Torihara are grown, experienced men and have learned over the years to erect defenses in order to keep from being hurt. Even after they begin dating, they must work to earn each other’s trust. Akira, for example, swears that he does have feelings for Torihara, but the idea of being physically intimate frightens him, like if he makes such a life change at age 32, there’ll be no turning back. Torihara, meanwhile, has a habitually negative outlook that makes it hard for him to believe Akira’s not merely with him out of sympathy; he needs tangible proof. To avoid responsibility, Akira unconsciously attempts to rile Torihara enough that he’ll take the decision out of his hands, but both know it would mean nothing unless it’s a step he chooses to take himself.

I love it when the obstacles a couple faces come from within and Dining Bar Akira pulls this off admirably. Like the best boys’ love manga, it focuses on the universality of its characters’ situation—the struggle of two people who like each other to achieve true intimacy. That they both happen to be sexy, professional men is completely beside the point. In this way, it reminds me of Future Lovers. (Other similarities include its sense of humor and the way the more cynical member of the pair has trouble shaking the worry that he’s robbed his optimistic partner of the security that comes with traditional married life.)

If Dining Bar Akira has a flaw, it’s that it seems to end too abruptly, but I’m not convinced that this truly is cause for complaint. In the final chapter, Torihara and Akira have developed a daily routine, but the days are slipping by so peacefully that Torihara worries the relationship will one day just naturally dissolve. There’s no real resolution to that situation, which is a little frustrating from a reader’s point of view—I, at least, tend to appreciate neat and tidy endings—but isn’t that more realistic? After such a complicated depiction of two people wrestling with feelings of fear and love, wouldn’t it cheapen the story to cap it off with a trite happy ever after? A similar tactic is employed with “Foggy Scene,” one of a pair of short bonus stories that round out the volume.

Yamashita’s art reminds me of est em, and those familiar with the latter’s work will recognize that for the compliment it is. There’s an elegant, expressive feel to her drawings that spills over into the story itself; Dining Bar Akira is positively bereft of any artistic clichés one might expect to encounter in boys’ love manga. Both leads look like adult men, and supporting characters (in the form of fellow coworkers) tend to be the same, with some approaching middle age.

I was unfamiliar with Tomoko Yamashita’s manga before this, and I’m sure many would say the same. With work of this quality, though, I hope that won’t remain the case for too much longer.

Dining Bar Akira is currently available only at NETCOMICS.com, but a print edition will be available soon. Another Tomoko Yamashita title, Black-Winged Love, is due later this year. I’ll definitely be checking it out.