I was genuinely not sure what to expect in the final volume of The Water Dragon’s Bride. While I naturally tend to assume that a happy ending is a given in a shoujo series, this series has explored the nature of humanity through the slowly changing personality of a god. It has also been unflinching about portraying all the petty and dark aspects of human nature, especially the machinations of humans who attempt to take advantage of the divine. 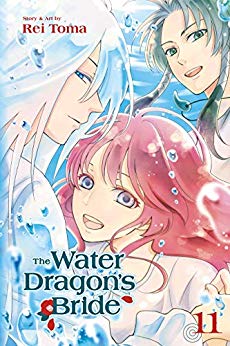 In the end, the final volume of this series has an elegantly constructed ending that allows for multiple moments of closure, another opportunity to ponder the nature of immortality, and some flashbacks that add additional resonance and meaning to the previous volumes. The Water Dragon God’s power is now fading after investing power into Asahi. Before he becomes too weak and disappears, he announces that he will send her back to her world. Asahi decides that she wants to spend time enjoying regular activities like picking berries and going fishing. Asahi, Subaru, and the Water Dragon God enjoy some brief lyrical moments just doing basic human activities. Toma’s skills in paneling and illustration are shown off to great advantage throughout this final volume, as brief wordless scenes convey a depth of emotion that make dialog and description unnecessary.

As the Water Dragon God prepares his farewell, Subaru gets a chance to be heroic yet again, looking out for Asahi and her future in a way that she might not immediately appreciate. Themes of longing and loss are explored as The Water Dragon God moves into a new plane of existence and Asahi integrates back into the life that she’s left behind twice. Overall, this was a tremendously affecting series, with a mystical and elegiac quality that sets it apart from other fantasy shoujo that I’ve read. I hope more of Toma’s manga makes it over here.

The Water Dragon’s Bride has always explored issues of humans using religion to justify terrible actions, and this is brought home even more when a god who is actively seeking to meddle gets turned loose. The Water Dragon God’s aloof personality and general lack of interest in humanity other than Asahi was a bit of a protective factor for humans. The God of Darkness, with his damaged human sidekick Kurose has nothing holding him back from some active and severe meddling.

I appreciate the way that Toma has developed Kurose’s character. The intense trauma that he’s experienced in the past gives more context for his turn towards darkness, and although he’s an antagonist for Asahi he’s much more complex than a typical villain. The God of Darkness is portraying the other gods as weak by inventing a Sun God for the humans to worship. By covering up the sun temporarily with darkness, and then letting the sun shine again, the humans are led to dismiss the Water Dragon God as evil and ineffectual. The emperor gets dethroned and Asahi wants to aid him, but she’s again a target of hatred for the humans. 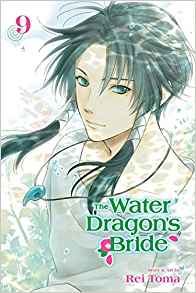 Kogahiko shows how malicious the combination of human and an evil god can be, even more than Kurose, as he deliberately manipulates everyone around him through the God of Darkness in order to get more political power. He still sees a use for Asahi, as a way of bolstering his new position by parading her in front of his subjects. Throughout this volume the Water Dragon God’s protectiveness and attitude towards Asahi is striking. When she asks him to forgo using his powers he complies, but his affection for Asahi ensures that he’ll find a way to protect her. As always, Toma’s deceptively simple art makes the most of the symbolism in this volume, as the humans turn towards the darkness in the guise of worshiping the sun. The Water Dragon’s Bride is surely one of the most philosophical shoujo series that I’ve read, which is also why it is a series I can see returning to and rereading in future years.

One of the central questions I had as a reader of The Water Dragon’s Bride was what would happen if Asahi managed to find her way home? With her return to modern day Japan and her decision to rejoin her friends in the world of the Water Dragon God, I was curious to see where Toma would take the plot next in terms of a main conflict. She introduces a new antagonist for the Water Dragon God and Asahi, and I’m genuinely curious to see where the story goes next because I’m not sure what to expect. 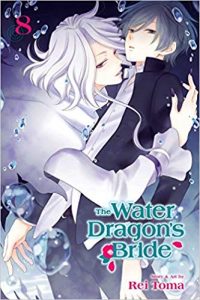 The idea of other castaway people has been touched on a little bit before in this series, but this volume takes a turn when it thoroughly explores the backstory of Kurose, the companion to Tokoyami the God of Darkness, who rules an Underworld where it is impossible for the Water Dragon God to enter. The Water Dragon God enlists Subaru for help, but it ends up being Asahi’s unpredictable reactions to danger and the strength of her caring for others that opens up a possibility for her to escape.

Asahi and the Water Dragon God end up creating some deadly supernatural enemies, and one of the things that I appreciate about Toma is that her antagonists are fully drawn, with motivations and reasons for their actions that cause the reader to ponder the nature of humanity. Kurose is bullied in school, and when he’s rescued by Tokoyami and taken to a world of darkness, we see what happens when a less resilient human gets exposed to supernatural influences without the benefit of Asahi’s strong inner will. Kurose has his own traumatic adventures in the world of the Water Dragon God, where bad things happen to good people, and the gods seem indifferent to the suffering that they refuse to intervene in. As always, Toma’s capable illustrations serve to heighten the impact of the symbolic world that the gods inhabit, contrasted to the lives of ordinary villagers and teenagers in the modern world. There’s a confrontation between the two gods and their companions which will surely happen in the volumes ahead, and I’m very curious to see if Asahi’s unique outlook and faith manages to get herself and the Water Dragon God out of yet another complex situation.