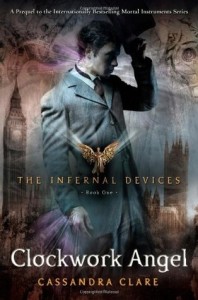 Tessa Gray arrives in England to live with her brother, but instead of Nathaniel she finds herself kidnapped. A pair of warlocks keep her locked in a house, forcing her to utilize a power she didn’t know she had—the ability to change into anyone, living or dead, and access their memories simply by holding an object they possessed. Suddenly Tessa is rescued by Will Herondale, a beautiful and dangerous boy who claims to be a Shadowhunter—warriors blessed with angelic power who exist to rid the world of demons. The rest of the Shadowhunters, like the diminutive Charlotte and the kind but sickly Jem, agree to protect Tessa from the mysterious Magister who had her kidnapped, and to help her find her lost brother. But as Tessa, Will, and Jem strive to figure out what is happening, Tessa may uncover some terrible truths.

Cassandra Clare’s first series, The Mortal Instruments, tells the story of Clary and Jace, a pair of superbly star-crossed lovers, which takes place in the present day. When the first three of this soon-to-be six book series was completed, Clare began work on a prequel that takes place over a hundred years before Clary and Jace’s adventures, The Infernal Devices. It’s not necessary to read both series together, but The Infernal Devices does provide some background for the other The Mortal Instruments, giving us a look not only at the ancestors of some of our favorite characters from the first set of books, but also a peek into the earlier lives of some of the immortals that make an appearance in both books. Since I often find myself more delighted with the side characters (in this case, a couple of immortals) than the main pair in The Mortal Instruments, this is a series I couldn’t help but pick up. Yen Press’s release of the manga adaptation was the perfect excuse to give this series a go.

While this novel, and presumably the rest of the trilogy, can stand on its own, there are some times when Clare seems to take for granted that her readers are already familiar with The Mortal Instruments series, as she doesn’t go quite so deeply into the details about Shadowhunters and their history, or spend so much time explaining the problems with Downworlders. The big things are easy to pick up on, though, like the harshness of their lives (most don’t grow very old, as they die in battle, and if they decide to leave they lose all contact with the ones they loved) and the Accords, a deal set with creatures like vampires and werewolves to help keep the peace.

A problem I’ve had with Clare’s writing in the past is the abundance of dead details—in particular, descriptions that have absolutely no bearing on the story. Most things such as dresses and rooms I can let slide, as Clare uses these descriptions to fix her readers in the time period. Other things, however, are entirely useless, like her constant referral to Will’s blue eyes. Bits like this waste time, slowing down the pace of the novel while also leaving little for the reader to imagine herself. Another thing that tends to clunk up the story is the tendency for conversations to veer off course, like when Tessa begins to ask Will to leave her brother alone, then suddenly rants (for pages) about Will’s personality and how he should be looking for Jem’s cure. These conversations just turn into characters saying things the readers already know or that are inconsequential to the story, unnecessarily dragging out the time between plot points.

Even with my gripes, Clockwork Angel is an entertaining young adult book, particularly if you’re already a fan of Clare’s other series. Her story is engaging, with sudden twists and betrayals, which are still exciting even if you can see them coming for ages. The cast is diverse (if predictable), with both the “good” and “bad” boy romantic interests, but even the most seemingly flat characters, like Jessamine, have hidden depths that, even if they don’t reveal themselves completely in this novel, leave the readers to believe that we’ll come to understand these characters as the series progresses. 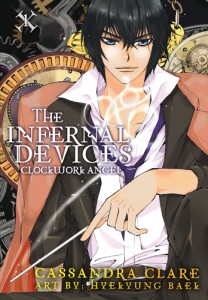 Now, for the manga. Hyekyung Baek’s adaptation does a good job of keeping us close to Tessa, convincingly converting the narration to her inner thoughts and giving us a shot of her dynamic expressions even in the middle of the excitement. Compared to the novel, the comic’s plot really clips along, with Baek skipping some unneeded scenes and cutting down the rambling conversations. But unfortunately, more often than not this swift pace works against the manga. Characters are moved like props from one place to the next so it’s hard to keep track of their movements, such as in one scene in which Tessa and company shift from the library to an upstairs room seemingly instantaneously. And while I feel readers get a clear understanding of Tessa and her character arc, the too-quick pace is damaging to the development of the other characters: we never get a clear picture of Charlotte’s trouble and insecurities with running the institute, and even snotty, selfish Jessamine comes across more sympathetic in the novel.

I enjoyed Baek’s art in the Gossip Girl adaptation, but while her style worked wonders in that glamorous, sexy world, it doesn’t quite click for me in Infernal Devices. Don’t get me wrong, Baek’s character designs are gorgeous, but I feel her style often makes the teenage characters look too old, and backgrounds are bland and boring, even when she includes detail. Baek also seems to go for prettiness over what was actually described in the novel, most notably when it comes to the maid Sophie’s face. When we first meet Sophie, Clare describes her scar: “a thick, silvery ridged scar slashed from the left corner of her mouth to her temple, pulling her face sideways and distorting her features into a twisted mask.” Baek draws the scar merely as a long scratch on the cheek, which could be taken as a stray strand of hair if Tessa didn’t mention it. One thing Baek’s art definitely improved upon were the goofy asides. Bits that came across as a bit awkward in the novel worked more easily in the comic, as exaggerated expressions and super-deformed characters gave the jokes more punch.

Many of my issues with Clare’s prose are stylistic, and while I wasn’t as invested in this novel as I have been in her other series, the problems I had still did not get in the way of my overall enjoyment of the book. The manga adaptation has its good points, but overall it left me feeling frustrated. While Clare’s novel may meander, the manga’s swift pace just barrels through the plot and skims over characterization. Baek’s adaptation is something fans will likely enjoy, but those looking to get a proper introduction to Clare’s universe are better off going with the novel.