snow white with the red hair

Snow White with the Red Hair Volume 2 by Sorata Akiduki

Snow White with the Red Hair had a fairly episodic first volume, so I was curious to see what the second volume would bring now that the characters and setting had all been set up. This volume blended medical mystery and palace intrigue with a little hit of the undercurrent of emotions between Shirayuki and Zen, in a way that sets up a great escapist read for anyone wanting to disappear momentarily into another world. 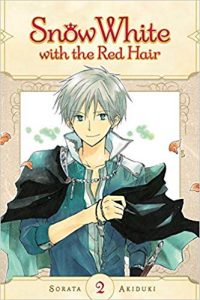 Snow White with the Red Hair doesn’t have the magical elements of a fantasy manga yet, but it has a quasi-medieval setting in an imaginary kingdom, and this volume opens with a low key slice of life situation as Shirayuki takes up her role as a court herbalist and finds out that she’s been paired with Ryu, a 12 year old prodigy as her new mentor. Ryu is brilliant, but not so great at dealing with people. Shirayuki’s open manner and genuine approach to dealing with people wins him over gradually. Shirayuki also learns some hard truths about Zen’s life when she gets a glimpse of his medical chart, which shows that however idyllic the setting of this manga is, people are still cruel to each other in unfathomable ways.

Shirayuki’s skills come to the forefront yet again when Zen investigates a fort where many of the soldiers are dealing with a mysterious illness. Here, all of Zen’s princely strategies aren’t all that useful, but Shirayuki’s keen knowledge and observational powers cause her to come up with a solution that he’d be unable to achieve. Things are complicated even further when Zen’s older brother comes back to the palace and shows himself to be thoroughly unpleasant. Even though there might be some manipulative scheming going on, the core of Snow White with the Red Hair is the gradually deepening friendship between Shirayuki and Zen. Seeing two characters who treasure each other so much invests this manga with a ton of heart. While most of their serious interactions are just a few panels here and there in between dealing with various tough situations, Akiduki has built up a tremendous amount of goodwill towards the couple in just two volumes. It is impossible not to root for them, even seeing that they will have plenty of obstacles ahead.