sleepy princess in the demon castle

Sleepy Princess in the Demon Castle, Volume 1 by Kagiji Kumanomata

This manga was an unexpected delight. I was initially curious about Sleepy Princess in the Demon Castle due to it being a Shonen Sunday title, which is a bit of a rarity. I feel like fantasy comedy series can be a bit hit or miss, but I found this title quite entertaining, mostly due to the way it subverts the whole idea of kidnapped princesses. 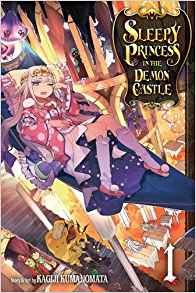 Syalis is the kidnapped princes in question and while the people in her kingdom pine for her and a idiotic knight vows to rescue her at the start of each chapter, she is solely concerned with getting some good rest. The demon castle lacks high quality pillows and bedding, and she is determined to secure what she needs by any means necessary. Syalis casually embarks on a reign of terror in the castle as she locates unique demons to use for her own purposes. She harvests fur from her guards, who look like fluffy teddy bears. She locates giant scissors and cuts off the body of ghosts in order to get some high quality fabric. Throughout most of the manga, her facial expressions are totally stoic, in contrast to the demons who are being driven frantic by her casual escape attempts. She also seems to have a knack for finding rare magical objects and repurposing them as sleep aids. There’s really only one joke in this manga, but it is executed very well. The unique character designs of the demons and the expanding cast of characters keeps the manga entertaining, even though the plot points in each chapter are so similar. I’m not sure how long the central joke can be sustained, as this series lasts for several volumes, but the first volume was so entertaining I’m definitely going to give it a try.