A new review was posted at Experiments in Manga last week! The final review in my (at one point monthly) horror manga review project delves into Setona Mizushiro’s After School Nightmare, Volume 10. I have mixed feelings about the series’ conclusion, but overall there was a lot that I really liked about the manga as a whole. I’m not exactly sure what my next in-depth feature will be (I have a few different ideas for it), but I do plan on writing a brief wrap-up for the horror manga review project. I’m also working on the post for Experiment in Manga’s (sixth!) anniversary which will be coming up later this month.

Also posted last week was Experiments in Manga’s most recent giveaway which offers a chance to win two Sparkler Monthly paperbacks, ebooks, or audio dramas of your choosing. The last few days of the giveaway coincides with the last few days of the Sparkler Monthly Year 4 Kickstarter. The winner of the giveaway will be announced on Wednesday, but the fate of Sparkler Monthly will be determined on Tuesday. There was a surge of support for the campaign over the weekend, but it still has a little ways to go if it’s going to succeed. I wrote a little bit on Twitter about the importance of Sparkler Monthly to me personally and in general; please consider contributing to the campaign in some way if you are at all able and haven’t already!

Speaking of Kickstarters, Czap Books recently launched a campaign to support it’s 2017 Collection. Last year Czap Books released the first volume of Laura Knetzger’s Bug Boys which I adored, and the books in the 2017 Collection all look as though they should be fantastic, too. Other interesting things found online last week include Deb Aoki’s writeup on manga at SDCC 2016 for Publishers Weekly. Audio recordings of some of the panels at SDCC are now available as well. (As are audio ecordings from TCAF 2016; I don’t remember if I previously mentioned those.) I haven’t had a chance to listen to it yet, but The OSAG introduced the first episode of Translator Tea Time, a podcast featuring two professional manga translators. Also last week, Yen Press slipped in a license announcement for Miyuki Nakayama’s Spirits & Cat Ears and Canno’s A Kiss and White Lily for Her.

Fairy Tail: Ice Trail, Volume 2 by Yuusuke Shirato. When I first started reading Ice Trail, a spinoff of Hiro Mashima’s Fairy Tail which follows Gray Fullbuster before he joins the guild, I had assumed that it would be a somewhat longer series. Gray is probably one of the most popular characters in Fairy Tail, but Ice Trail ends up only being two volumes long. It’s a fun and even cute series that introduces some original characters in addition to incorporating, either directly or indirectly, cast members from Fairy Tail. Readers already familiar with Fairy Tail will probably get the most out of Ice Trail, but the series doesn’t require much previous knowledge of the original story and characters to follow what is going on. The second volume concludes Gray’s search for the Fairy Tail guild, having heard that it was home to a number of great wizards. As Gray journeys to Magnolia, he more or less unintentionally forms a three-person adventure party with another boy named Pauz, a wizard whose magic is based on books and paper (a type of magic which unsurprisingly I loved) and the young thief Doronbo, who was probably my favorite character out of the entire mini-series. Although initially their relationships were somewhat antagonistic, by the end of Ice Trail the three have become close friends, keeping with the tradition and themes of Fairy Tail as a whole.

Genshiken: Second Season, Volumes 7-8 by Shimoku Kio. It’s admittedly been a little while since I’ve read the original Genshiken manga, but there do seem to be quite a few parallels between the two series. Granted, Second Season is probably much closer to being a continuation of Genshiken proper rather than an entirely separate series. One similarity that particularly struck me reading these two volumes is that both Genshiken and Second Season start as series about otaku and their hobbies but soon evolve into series that’s more about the relationships between the members of the club and inevitably romance. At this point in Second Season, Hato is coming to terms with his feelings for Madarame and is beginning to dress as a woman more frequently. (Just how closely those two things are related to each other is debatable.) As Hato starts making the moves on Madarame, the rest of Madarame’s real-life harem is thrown into turmoil. And of course everyone on the sidelines has their own pairings that they’re rooting for, treating it almost like a game which creates even more drama. Madarame himself isn’t really sure what to do with the situation and has his own conflicted feelings to work out. I won’t lie—I like Hato and Madarame together, so I’m very curious to see where this is all heading.

A Redtail’s Dream by Minna Sundberg. I don’t remember exactly when the webcomic A Redtail’s Dream was first recommended to me, but never got around to reading it until now. Which is a complete and utter shame. I had actually forgotten about it but recently came across it again while looking for a different comic entirely. The collected edition of A Redtail’s Dream includes the entire series in a single, massive volume along with additional bonus content, commentary, and cultural notes not found online. A Redtail’s Dream is an absolutely gorgeous comic. Drawn over the course of two years, each chapter is illustrated using a different color palette and the results are simply beautiful. The comic is strongly influenced by Finnish mythology (Sundberg was born in Sweden, but was raised and lives in Finland), but familiarity with those stories and legends is not at all necessary to appreciate and enjoy Sundberg’s epic. A Redtail’s Dream follows Hannu and his beloved dog Ville who are given the responsibility of rescuing the souls of their friends, family, and neighbors when a young spirit fox accidentally causes their village to slip into a dream realm which is dangerously close the land of the dead. Hannu is actually fairly antisocial, so it’s interesting (and amusing) to see him crankily take on the role of the hero when he’d much rather just be left alone. 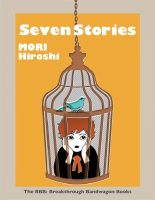 Seven Stories by Hiroshi Mori. Outside of Japan, Mori is probably best known as the creator of The Sky Crawlers, which was adapted as an anime film directed by Mamoru Oshii in 2008, and his debut novel The Perfect Insider, which was even more recently adapted as an eleven-episode anime series. Inside of Japan, Mori is an extremely prolific, well-known, and popular author. (Apparently, Mori also wrote the novelization of Moto Hagio’s Heart of Thomas, which I didn’t even know existed; I’d love to read that.) It wasn’t until recently that any of Mori’s writing was translated into English, thanks to the efforts of Breakthrough Bandwagon Books. As can be safely assumed by the title, Seven Stories collects seven of Mori’s short works, some of which are representative of his earliest short stories and most of which can be generally categorized as mysteries with some interesting twists: “The Girl Who Was the Little Bird,” “A Pair of Hearts,” “I’m In Debt to Akiko,” “Silent Prayer In Empty,” “Kappa,” “The Rooftop Ornament of Stone Ratha,” and “Which Is the Witch?” (The last two stories are actually from Mori’s S&M series which is a continuation of sorts of The Perfect Insider.) The collection also includes an essay by the editor and translator, providing additional background information and context for the stories which I greatly appreciated. The translation tends to be more literal and academic than literary, but the dry humor present in some of the stories still comes through quite well.