Of the Red the Light and the Ayakashi

I actually managed to post another review at Experiments in Manga last week! That makes two weeks in a row, which hasn’t happened in a very long time. My goal of writing one review every month still remains, but when a month with five Wednesdays (like March this year) comes along, I’m going to try to do a second in-depth review or feature. That way, every week will have at least two posts, the usual My Week in Manga along with another feature of some sort. Anyway, as for the review that was posted last week, I took a look at Akira Himekawa’s The Legend of Zelda: Twilight Princess, Volume 1 which I enjoyed a great deal. The manga stands well on its own so someone doesn’t have to be familiar with the original video game it’s based on to enjoy it. The manga series is also notably darker than Himekawa’s previous all-ages adaptations of The Legend of Zelda video games.

Elsewhere online, I came across a few interesting interviews to read. Over at Viz Media’s blog, speculative fiction author Taiyo Fujii talks a little about Orbital Cloud, his most recent novel to be translated into English. (I previously read and reviewed Gene Mapper, Fujii’s debut work of fiction which I rather enjoyed, so I’m looking forward to reading the award-winning Orbital Cloud.) Through the Painting is in the process of translating a 2013 Tokyo Manga Lab interview with Haruko Kumota, creator of the manga series Descending Stories: Showa Genroku Rakugo Shinju. (Kodansha Comics is releasing the series in English; it’s one of my most anticipated debuts of the year.) Finally, on the occasion of Yen Press’ recent release of Canno’s Kiss and White Lily for My Dearest Girl, Brigid Alverson interviewed Erica Friedman about yuri manga for Barnes & Noble. And speaking of Yen Press, the publisher announced a few manga licenses last week: Re:ZERO -Starting Life in Another World, Chapter 3: Truth of Zero by Tappei Nagatsuki, Shinichirou Otsuka, Daichi Matsuse; Is It Wrong to Try to Pick Up Girls in a Dungeon?: Sword Oratoria by Fujino Omori, Takashi Yagi; Hybrid x Heart by Masamune Kuji, Riku Ayakawa; and Gabriel Dropout by Ukami.

The Ghost in the Shell, Volume 2: Man-Machine Interface by Masamune Shirow. It’s been well over a decade since I first read Masamune’s The Ghost in the Shell manga. While I had vague memories of the first volume, I remembered virtually nothing about the second. Kodansha Comics’ recent re-release of the series in a deluxe, hardcover edition provided an ideal opportunity for me to revisit the manga. (The deluxe edition presents the manga in right-to-left format with the original Japanese sound effects for the first time; it’s also supposed to have bonus content, but I’m not exactly sure what that additional material is supposed to be in second volume.) Upon rereading the second volume of The Ghost in the Shell, I think I know why I had trouble recalling anything about it–the manga seems to be more show than substance. At times I would find that I had stopped reading the seemingly nonsensical text entirely and was just turning pages and looking the artwork, much of which is in color. There is a story in there somewhere, as well as some interesting worldbuilding and philosophizing, but most of that seems to be happening in the copious footnotes rather than in the manga proper.

A Land Called Tarot by Gael Bertrand. Originally serialized in the Island comics anthology, A Land Called Tarot was recently released in a standalone hardcover collection with additional content. Except for a few sound effects, A Land Called Tarot is actually a wordless comic. There is no dialogue or narration, so readers must rely entirely on Bertrand’s artwork to interpret the characters, story, and setting. Fortunately, Bertrand is more than up to the task. The artwork in A Land Called Tarot is absolutely gorgeous. The cover design is actually somewhat misleading–the interior illustrations are marvelously detailed and beautifully colorful. The lack of words in the comic invites readers to pay even more attention to the artwork and to explore the nuances of the fantastic world that Bertrand has created. The comic follows an adventurous hero, the Knight of Swords, as he travels across the land and meeting its people, his journey taking him through both time and space. There are moments of action and battle, but there are also moments that are peaceful and serene and sometimes even little lonely. A Land Called Tarot is a wondrous delight. I unequivocally loved the comic hope to see more work by Bertrand in the future.

My Neighbor Seki, Volumes 5-7 by Takuma Morishige. I’m not really sure why I’ve fallen behind reading of My Neighbor Seki because I enjoy the series a great deal. The manga remains consistently delightful and is wonderfully charming. My introduction to the series was through its anime adaptation; the chapters in these three volumes happen to be released or serialized around the same time that the anime was being produced. The author’s notes seem to imply that the manga wasn’t initially anticipated to become as long as it now has (the series is actually still ongoing, as far as I can tell) but the anime understandably revitalized interest in My Neighbor Seki. I like both versions of My Neighbor Seki, but there’s more in the manga that was never adapted. I continue to be impressed by Morishige’s inventiveness and imagination in creating new and clever scenarios for the series’ characters. Not much has changed from the beginning of My Neighbor Seki, although occasionally Seki isn’t the only one actively participating in the games he plays instead of paying attention in class. His mother has been introduced, too. I hope to see her again as one of the recurring characters.

Of the Red, the Light, and the Ayakashi, Volumes 2-3 by Nanao. While I enjoyed the first volume of Of the Red, the Light, and the Ayakashi, especially its ominous atmosphere and the sense of foreboding it inspired, it’s taken me quite a while to finally get around to reading more of the series. Now I’m regretting my delay, because the next two volumes are just as enticing as the first, if not more so, and if anything the series is getting stronger as a whole. Granted, there’s still some annoying awkwardness surrounding some of the characters’ conversations in which they seem to talk around important topics and information simply because the reader isn’t supposed to know the details about them yet. But even with this fault, Of the Red, the Light, and the Ayakashi manages to remain engaging. Part of this is due to the series’ air of mystery and the way in which Nanao is able to stretch out the story without being manipulative. For example, an important reveal in the second volume which in many other stories would have been the major plot twist is simply one in a longer string of steady developments. Several more questions are raised for every one that is answered in the series; I am incredibly curious to learn more. 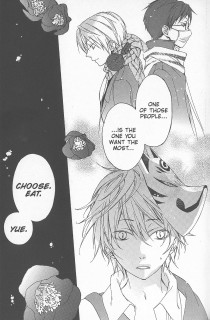