Gengoroh Tagame is an extremely influential manga creator known worldwide for his work in sadomasochistic, homoerotic fantasies. More recently, however, he has garnered a significant amount of attention for his series My Brother’s Husband, a four-volume manga aimed at general audience which directly addresses homophobia and other forms of discrimination in Japanese culture–one of the first works of its kind created for a prominent, mainstream magazine. My Brother’s Husband began serialization in Monthly Action in 2014 and would go on to win a Japan Media Arts Excellence Award in 2015. The series is one of the very few manga which I have made the point of collecting in the original Japanese, but I was absolutely thrilled when it was licensed for an English-language release. Translated by Anne Ishii, who has been instrumental in bringing Tagame’s work as a whole to English-reading audiences, the first omnibus in Pantheon Books’ hardcover edition of My Brother’s Husband was published in 2017 and is equivalent to the first two Japanese volumes released in 2015 and 2016.

Yaichi is a single father in Japan raising his young daughter Kana. Following the unexpected death of his estranged twin brother Ryoji, his brother’s Canadian husband Mike Flanagan arrives to meet the family and pay his respects. Yaichi’s life is suddenly upended–out of touch with Ryoji for years, he had never entirely come to terms with the fact that his younger brother was gay, but with Mike around it becomes something impossible for him to ignore. As for Kana, she is absolutely delighted to discover an uncle who she never knew existed and manages to convince her father to allow Mike to stay in their home while he’s in the area. As the days pass, the three of them become closer despite the occasional awkward clash of cultures; Mike’s kindhearted, gentle nature combined with Kana’s infectious exuberance and curiosity force Yaichi to reflect on his own learned attitudes and preconceived notions regarding homosexuality as well as confront the gulf that formed between him and Ryoji because of them. Through Mike, Yaichi is finally able reconnect with and learn more about his brother and who he was. 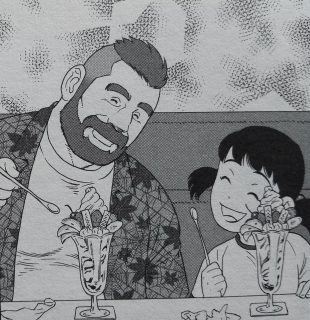 Tagame’s message of kindness, love, and acceptance in My Brother’s Husband is not at all subtle. At times it may come across as obvious or even like preaching to the choir for some readers, but the manga is really intended more for those who, like Yaichi, have casually conformed with and promulgated a culture of discrimination and misinformed stereotypes within society without putting much thought into it than it is for those who have personally experienced the negative effects of that discrimination. Even so, My Brother’s Husband still has plenty to offer that will appeal to a wide audience. The series is in turns heartwarming and heartbreaking, an honest and earnest exploration of family and the complex and often complicated relationships that exist between people. It’s a beautiful and moving story supported by strong, expressive artwork. Unsurprisingly, considering his artistic background, Tagame particularly excels in the realistic portrayal of adult masculine forms, but Kana’s cute character design can be quite effective as well. The backgrounds in the manga are fairly simple, the focus of Tageme’s illustrations is definitely on the characters, their facial expressions and body language adeptly conveying their thoughts and feelings, helping to establish the emotional core of the manga.

I unequivocally love the three lead characters and the development of their relationships in My Brother’s Husband. One of ways this is frequently accomplished in the manga which I particularly appreciate is through the sharing of meals and food, a natural and important way that people form connections in real life which serves to further cement those that exist in My Brother’s Husband. In addition to providing the series’ primary point of perspective, Yaichi is also probably the most well-rounded character. He has his flaws, but he is also a devoted and caring father who is willing to challenge his own internalized prejudices, initially for the sake of his daughter but ultimately for himself and the others, like Mike, he has come to care about as well. Seeing Yaichi slowly grow as a person and become more accepting over the course of the first omnibus of My Brother’s Husband has been wonderful. Mike, while overall coming across as a less nuanced character, is still a very positive and sympathetic portrayal of a gay man, his incredible patience and understanding adding to what makes him so immensely endearing. And of course there’s Kana, too, who can so easily love others despite their differences, her youth and innocence allowing her an amount of freedom and flexibility that’s not as easily accessible to adults who have already become set in their ways. I am very much looking forward to the continuation and conclusion of the story of these three in the second omnibus of My Brother’s Husband.