my boyfriend is a vampire

MICHELLE: Omigawd, you almost gave me a heart attack.

MICHELLE: I suppose that is the spirit of the season.

MELINDA: So, speaking of the season, I expect you’ve been indulging in some spooky manga this week?

MICHELLE: Some spooky, others not-so-spooky, but generally Halloweenish, yes. 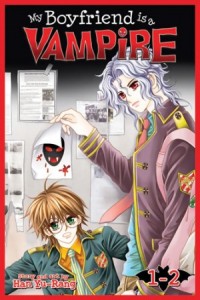 One thing I checked out was the debut of a new manhwa from Seven Seas (their first, I think) called My Boyfriend Is a Vampire. This series appears to be complete in fourteen volumes, and Seven Seas is releasing it in 2-in-1 omnibus editions.

I have to say, this does not get off to a very auspicious start. A girlish boy collapses on the street from a neck wound and the police are called when he is found to have no pulse. Just when the cops arrive, however, the guy sits up and takes off. When he gets home, the wound has already healed but he has inexplicably turned into a girl.

Cue flashback to a month ago, where the boy (Gene) is getting into lots of fights over the fact that he looks like a girl when he isn’t agreeing to masquerade as one. This is all fairly silly until he, in the middle of defending gang territory, ends up in the middle of a squabble between two vampire half-brothers, each with the potential to become their powerful father’s heir. Long story short, he saves one guy (Ryu) but ends up being made a vamp in the process (cue paragraph one) and of course there is some awesome legend or prophecy or something about a girl who survives being bitten and how she will be the 1337est vampire ever and also have the ability to change genders or something.

Honestly, a lot of this story is pretty ridiculous and the art is totally generic, but by the end I was looking forward to reading more. Strip away the supernatural trappings and what this reminds me of the most is Click, another manhwa which was published by NETCOMICS a few years ago. You’ve got the tough/bratty guy who becomes a girl, the best friend from childhood with whom there will now presumably be romantic tension, and the undesirable element to whom the protagonist finds him/herself drawn. The fact that vampires are involved really doesn’t matter very much at this point, since this seems poised to be a gender-bending comedy.

I believe you’ve read this one, too. What did you think of it?

MELINDA: Well, I’m absolutely with you on the general ridiculousness of this series so far, though I admit to enjoying it for its silliness more than I would have expected. While it lacks the cracktastic brilliance of something like Reiko Shimizu’s Moon Child or even slightly more down-to-earth treasures like SangEun Lee’s 13th Boy, it has enough of a spark to grab my interest, even in its lesser moments. I’m sad to note that there are many more of those “lesser moments” than I’d like, but I can’t help looking forward to the next volume.

MICHELLE: Same here, and though the second volume was much stronger than the first, which bodes well for things to come. It might not be a masterpiece, but it will likely be entertaining.

So, have you been reading spooky manga this week? 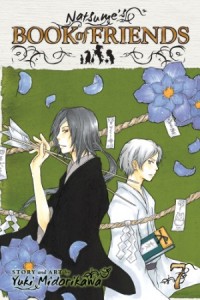 MELINDA: I have indeed, or at least partly so. My first read this week was volume seven of Yuki Midorikawa’s Natsume’s Book of Friends. Though this supernatural series tends more towards adjectives like “quiet” and “touching” than it does things like “scary,” this particular volume actually kinda hits the mark.

In this volume, Natusme finds himself relying on his uneasy friendship with flashy exorcist Natori in the face of someone much more terrifying, whose disregard for yokai puts Natsume and his friends in danger. And as it turns out, this is a really good thing. This is not a series that I generally consider suspenseful, but I was hovering on the edge of my seat for this entire volume, worried and anxious and generally creeped out.

Midorikawa’s artwork has always been a highlight of this series, creating wonderfully rich emotional moments with imagery alone. Even so, I was surprised here by how easily she was able to put me on edge with the tiniest visual details. The shade of an umbrella, a part of the hair, the shape of a lip—each of these tiny details is used in a way that stood my hair on end. It’s marvelous to behold.

Though this series was a fast favorite for me, early on, I’ll admit my interest waned during some of its middle volumes. Those days are clearly over now, and I simply can’t wait to see what comes next.

MICHELLE: I know I say this every time you mention Natsume’s Book of Friends, but I really am planning to get caught up on it soon. When you wrote about the worry and anxiety you experienced it reminded me of the similar atmosphere created by Ghost Hunt when that series was firing on all cylinders. Which, in turn, made me sad that we’ll probably never see its twelfth and final volume in English. Unless Sailor Moon makes Kodansha so much money they can afford to take on charity cases.

It seems like Midorikawa also gets that the secret to engaging your reader like this is not concocting frightening situations but creating characters that people will genuinely be concerned about. Sometimes that’s lacking in straight-up horror manga.

MELINDA: That’s a great point, Michelle, and definitely appropriate to this series! Yes, we’re anxious here not because Natsume has met a really creepy guy (though he has) but because of the vulnerable position Natsume and the yokai are in. It’s really quite harrowing!

So what’s your other maybe-spooky-maybe-not selection for the evening? 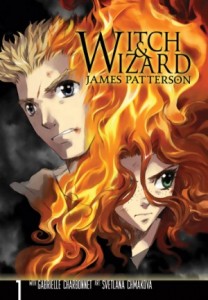 MICHELLE: The first volume of the Yen Press adaptation of James Patterson’s Witch & Wizard, drawn by Svetlana Chmakova, who has become somewhat of a Halloween fixture for me thanks to her Nightschool series.

Alas, I don’t like this one as much as Nightschool. At least, not yet. I can’t tell if the problem is Patterson’s original novel (which I haven’t read) or this adaptation, but I am leaning towards the latter. It’s not that it’s outright bad, but it’s extremely rushed and the juxtaposition of comedy (I use the term loosely) and drama (ditto) is jarring.

An oppressive organization known as N.O. (New Order) has taken over government and is rounding up anyone who does not conform to their ideals of law, logic, order and science. To this end, soldiers break into the home of the Allgood family and take children Whit (nearly 18) and Wisty (15) into custody. For some reason, N.O.’s representative during this encounter is some snot-nosed teen whom the Allgood siblings make fun of. Anyway, through various miscarriages of justice they end up incarcerated and facing imminent execution, until they are brought into the “Shadowland” by Celia, Whit’s deceased girlfriend.

I mean, there truly is potential here, but everything just happens so fast that many things ring false. For example, Whit pines a lot for Celia, his “soulmate” who has gone missing. When his powers have developed enough that he is able to slip through a wall and arrive in the Shadowland, she tells him that she’s been murdered. Only it’s like she’s fine one panel then in the next tears are suddenly streaming down her face as she infodumps the details of her demise. Nine pages later, Whit is making stupid quips again. That just seems so wrong to me. Where is the impact here?

MELINDA: Like you, I’ve never read the novel, so I can’t really make a clear call here, but what you describe seems to me to match the most common problem I’ve seen in comic adaptations of novels overall. Maybe some of it can be chalked up to some things transferring better from prose than others, but really most of the time it just seems to come down to… well, time. It takes time to tell a story well, regardless of the medium, and for some reason that’s where comic adaptations really seem to skimp.

MICHELLE: Yeah. I’ll probably give it another volume to see how it develops, at least. Maybe now that the exposition’s out of the way the story will be able to breathe a little.

So, what else have you got for us this evening? 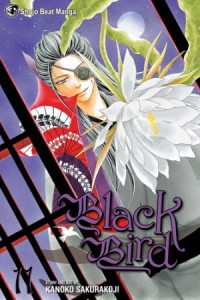 MELINDA: Well, you know, “horror” can have various meanings, and in my ongoing experiment to see just how much “horror” I can take, I decided to delve into volume eleven of Kanoko Sakurakouji’s demon-centric romance, Black Bird.

It’s possible that the most horrifying aspect of the latest volume of Black Bird is that, relatively speaking, it’s really not all that bad. Sure, Misao walks around with a permanent flush on her face and Kyo is possessive and controlling, but somewhere along the way in this volume it seems like… I can’t believe I’m going to say this… it seems like maybe he kind of learns something.

Furthermore, this volume is actually kind of scary in the more traditional sense. Kyo’s brother, Sho, has returned with an ugly agenda, and for once there seems to be some real danger here. And though there is a seriously overplayed “scorned woman” in the mix (groan, why do authors do this to women?), I have to admit that the volume wraps up with some genuine suspense, and I almost-sorta-kinda want to know what happens next.

Now, before you lose all faith in reality as you know it, I’m not exactly giving a positive review of a volume of Black Bird. But finding myself in a position where I’m not inclined to give a scathing one certainly seems like a step up.

Have you died? I hope you haven’t died.

MICHELLE: I haven’t died, but I did have to fetch my smelling salts.

I’ll be interested to see whether Black Bird will ever be able to redeem itself in your eyes. I keep thinking I should read it—and, indeed, I have quite a stockpile of volumes—but I only have so much time and I always prioritize something else. So, in a way, you’re doing this for all of us who want to see what happens without investing our own time and eyeballs.

MELINDA: Well, time will tell whether my eyeballs are truly up to the task. But thankfully, this particular volume offered up a not-too-horrible Halloween-appropriate read.

MICHELLE: I think it’s fitting that we end our Halloween column on the topic of eyeballs.

MELINDA: Agreed. Happy Halloween everyone, from Off the Shelf!