Man of Many Faces

Once again, I was actually away for most of the week last week. The taiko ensemble I that primarily play with had a series of performances, a mini taiko tour of sorts, so I was traveling. We had a great time; I only wish I that could make my living in music! (Who knows, maybe in the future I’ll be able to make it work. You know, once the mountain of student loans has been paid back.) Although I fell behind in my reading and writing, I did have a few things in queue to post at Experiments in Manga. First, the Assassination Classroom Giveaway Winner was announced. The post also includes a list of manga available in English that feature teachers. I’m a couple of volumes behind in my reviews for the series, but the honor of the first in-depth manga review for July goes to Fumi Yoshinaga’s What Did You Eat Yesterday?, Volume 7. Kenji finally has the chance to meet Shiro’s parents and it’s great. Finally, over the weekend, I posted June’s Bookshelf Overload. Most notably, I found an entire set of the tragically out-of-print Banana Fish that I didn’t have to trade a kidney to obtain!

Because I was away from the Internet for so many days, I didn’t really stumble across any articles that I found particularly interesting. However, Anime Expo was held last week, and there were a ton of licensing announcements. (Manga Bookshelf cohort Sean has a nice roundup.) Kodansha has Akiko Higashimura’s Princess Jellyfish (I’m thrilled!), Shizumu Watanabe and Okushō’s Real Account, and Hoshino Taguchi’s Magatsuki. Haikasoru has the first three novels of Yoshiki Tanaka’s Legend of the Galactic Heroes (hooray!), and Sentai licensed the anime series. Shojo Beat picked up Matsuri Hino’s Shuriken and Pleats and Bisco Hatori’s Behind the Scenes. Seven Seas licensed Angel Beats!: Heaven’s Door. Tokyopop returns to manga publishing in 2016, but no specific titles have yet been mentioned. Vertical will be releasing Keiichi Arawi’s Nichijō, and Kanata Konami’s FukuFuku: Kitten Tales among other things. Yen Press announced a slew of manga and light novel acquisitions, too, including the mahjong manga Saki! (Sadly, it’s currently only a digital release.) I’m sure I’ve missed something, so please let me know what exciting news or reading I should be aware of!

The Ancient Magus’ Bride, Volume 1 by Kore Yamazaki. Apparently, The Ancient Magus’ Bride started as a one-shot doujin before catching the eye of an editor. It’s a curious and atmospheric manga, mostly set in current-day England, albeit it’s a world in which magic and alchemy take their place alongside science. Although magic use seems to be fading away, fae are still very real and a few humans show rare talent for the craft. Chise is one of those humans. Sold into slavery, she is purchased and perhaps rescued by a Elias, a powerful mage who wants her to become his apprentice. He also mentions something about Chise becoming his bride, too, though she can’t quite tell if he’s being serious or not. Granted, it’s a little difficult to read a person with an animal skull for a head. Yokai exist in The Ancient Magus’ Bride as well (they can be seen in the background of some of Chise’s memories), but so far it appears as though the manga will be focusing on Europe’s fantastical and legendary creatures. I enjoyed the first volume of The Anceint Magus’ Bride a great deal and look forward to reading more of the series. 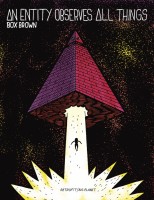 An Entity Observes All Things by Box Brown. I was already curious about An Entity Observes All Things, but after briefly meeting Brown at TCAF I knew that I wanted to read it. The volume includes nine of Brown’s short, alternative comics, three of which were previously published elsewhere while I believe the other six are new for the collection. Though for the most part the comics are unrelated to each other—they don’t really share characters, plots, or settings and even their color palettes are different—in general, the short works fall into the category of science fiction and deal with themes of exploration, specifically of the world and of the self. They all tend to be fairly quirky, too, and can often be rather humorous without necessarily being comedies. I enjoyed An Entity Observes All Things quite a bit. As with most collections, some of the individual comics worked for me more than others, but overall I found the selections to be engaging. Sometimes funny and sometimes sad, the comics are all somewhat strange, and that’s something that I particularly appreciate about An Entity Observes All Things.

Man of Many Faces, Volumes 1-2 by CLAMP. I largely enjoy manga by CLAMP, but if I’m going to be honest, I was primarily interested in Man of Many Faces due to its loose connection to the works of Edogawa Rampo. For the most part, the Rampo references are limited to the characters’ names and roles. There’s the titular “Twenty Faces,” a skilled thief in both Rampo and CLAMP’s creations, a young man by the name of Kobayashi who chases after him, and even Akechi-sensei, although he’s a school doctor rather than a detective in the manga. Man of Many Faces is one of CLAMP’s earliest professional works and it is very, very silly, the more absurd elements being lampshaded and intentionally left unexplained. However, the manga ends up being rather sweet and charming, too. Twenty Faces is a third grader who has taken on the role of the gentleman thief in the absence of his father. Akira steals things according to the whims of his two eccentric mothers in addition to doing all of the cooking and housework. Although the story at first focuses on the various heists, ultimately Man of Many Faces is about romantic love.