Love Me, Love Me Not, Volume 1 by Io Sakisaka

Strobe Edge was good, and Ao Haru Ride is a special series, so I was very excited when I saw that another Io Sakisaka series was going to be put out under the Shojo Beat imprint. Sakisaka changes things up a little bit by focusing just as much on female friendship as romance. Yuna is a girl who loves reading shoujo manga. She’s a bit shy and not very confident, but she’s quietly very nice. She meets the more outspoken Akari when she asks Yuna for train fare. Yuna also encounters a mysterious, but somewhat crass boy who resembles her long-dreamed of storybook prince. Akari and Yuna bond when they realize that they are both living in the same apartment building and attending the same high school. Yuna shares her romantic dreams, and Akari counters with her much more pragmatic approach of going out and meeting people instead of quietly waiting for a destined love to show up. Akari is surprised when Kazuomi drops by – he’s Yuna’s childhood friend and Yuna’s shyness disappears when she talks to him because she thinks of him like a brother. 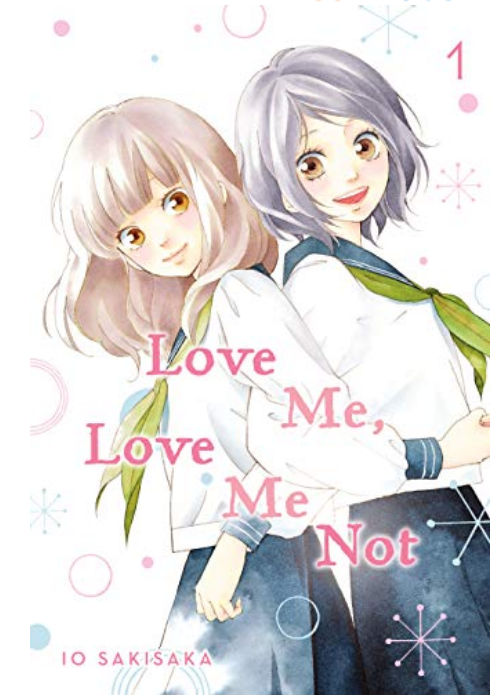 The characters are all introduced in a series of slice of live scenes that feel very naturalistic. They run into each other on the sidewalk, in convenience stores, walking to and from school, and visiting outside their part-time jobs. As Yuna gets to know Akari better she discovers that her fabled prince is named Rio, and he’s actually Akari’s brother! Akari is concerned about what would happen if Yuna gives in to her crush, because Rio is a bit of a player and is constantly turning down confessions of love from girls. Akari concludes that Yuna should get together with Kazuomi, but she also finds his forthright ways attractive. There’s a not super surprising twist at the end that sends Love Me, Love Me Not firmly into Marmalade Boy territory. This first volume does a great job setting up four sympathetic characters who are all equally engaging despite having very different personalities. Yuna might spend a great deal of time averting her eyes and blushing, but she is willing to push herself to stand up for Akari when some false rumors start going around. Akari is outspoken and always strategizing about what to do when it comes to her friends, but not always great at sharing her own feelings. While Rio is treated in a certain way due to his looks, it is easy to see from his body language and facial expressions, that he’s also burdened by girls developing crushes on him without even taking the time to talk to him. Kazuomi has an open personality, combined with the ability to occasionally come out with pronouncements about life and relationships that make him seem irresistibly cool.

Sakisaka does a great job setting up a new series in the first volume of Love Me, Love Me Not. I like the idea of a shoujo series that will focus just as much on female friendship as it does on romance, and will be eagerly waiting to see how this tangled web of potential teen romance develops in future volumes.